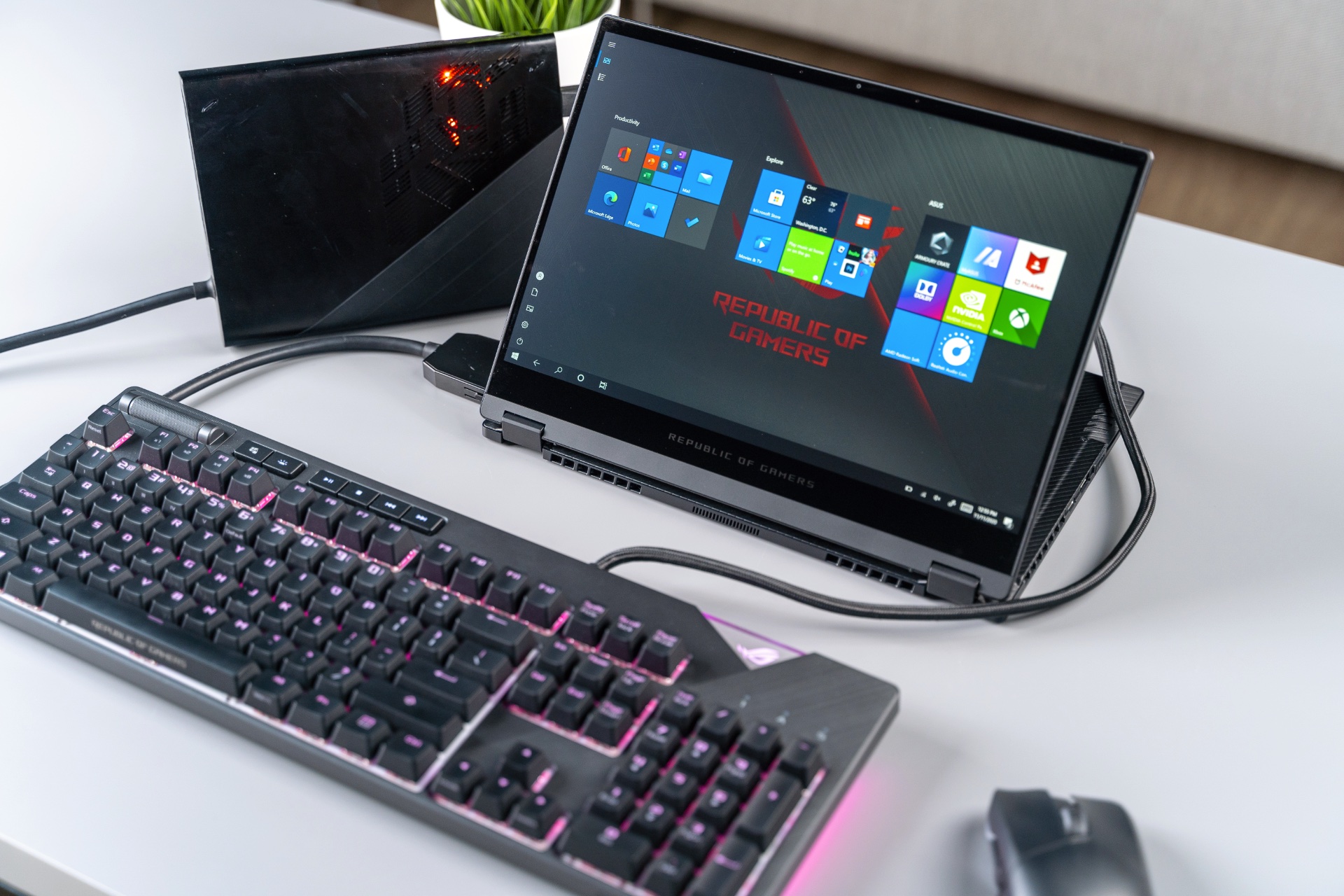 At CES 2021, ASUS unveiled an unusual laptop in the ROG series, which will be the first model in the new Flow line. The novelty was named ROG Flow X13 and is equipped with a 13.4-inch touchscreen display, which opens up to 360 degrees, as well as a discrete graphics card NVIDIA GeForce GTX 1650. And this with a case thickness of 15.8 mm and a weight of 1.3 kg. But let’s look at the characteristics of the model in a little more detail. ASUS ROG Flow X13 is built on the AMD platform and will be offered in versions with Ryzen 9 5900HS and Ryzen 7 5800HS processors as standard. Ryzen 5000 series mobile chips are built on the new Zen 3 microarchitecture with up to 20MB of cache. The HS mark indicates a typical power consumption (TDP) of 35W, which is important for such a slim case. At the same time, the processor is capable of operating in the increased performance mode, which corresponds to a TDP of 54 W, when the operating temperature and power supply allow it. The Flow X13 Supernova Edition will also feature a Ryzen 9 5980HS processor with a maximum clock speed of 4.8 GHz.

The laptop can be installed up to 32 GB of RAM, configurations will be available with two LPDDR4X 4266 MHz 8 GB modules, as well as two 16 GB modules. The RAM in this model is soldered on the board, but LPDDR4X-4266 has its advantages, in particular, lower power consumption and heat dissipation. In addition, due to the size of the microcircuits and simplified layout, such memory, according to ASUS, takes up 46% less area on the motherboard than DDR4, which leaves more room for installing other components.

The laptop is equipped with a discrete GeForce GTX 1650 graphics card with 4 GB of GDDR6 video memory, capable of reaching a clock speed of 1255 MHz with a power consumption of 35 W (in Turbo mode, with ROG Boost technology). In addition, the manufacturer indicates that the performance of the accelerator can be increased with a simultaneous increase in power consumption by 5 W using Dynamic Boost technology. The notebook uses a liquid metal thermal interface to cool the processor, which ASUS says can lower the processor temperature to 10 ° C compared to standard thermal grease. In addition, heat is removed from the processor, video card and power elements of the power system using two heat pipes with a refined shape to save space and increase the contact area.

Overall, the passive portion of the cooling system includes three large heatsinks and uses multiple vents. And they are complemented by Dual Arc Flow fans with a new design with 84 blades of different thicknesses to increase air flow circulation.

The keyboard in ROG Flow X13 spans the entire width of the case and lifts slightly when the display is opened thanks to the ErgoLift hinge design. The keys in the laptop have a concave surface and have a travel of 1.7 mm. And the keyboard itself is capable of correctly registering any number of simultaneous presses and is equipped with a white backlight. The touchpad is a medium-sized laptop and supports standard Windows 10 gestures. The laptop uses a 62 Wh battery, according to ASUS, it provides up to 10 hours of battery life in video playback mode. In addition, the laptop can be charged via the USB Type-C port from external batteries and chargers with Power Delivery support. The included 100W power adapter also has a Type-C connector. At 75x75x28.8mm and weighing 300 grams, it is much smaller and lighter than conventional gaming laptop power supplies. With fast charging technology, the laptop battery can be charged to 50% in just 30 minutes.

Despite its compact size, ROG Flow X13 is equipped with a USB 3.2 Gen 2 Type-C port with support for Power Delivery modes and image output to an external display (DisplayPort 1.4 specification).

Another display can be connected to the laptop via HDMI 2.0b output. The USB 3.2 Gen 2 Type-A port is convenient for connecting a gaming mouse or gamepad, and the 3.5mm jack for headphones or headsets. The ROG XG Mobile dock extends this set of interfaces. And here it is worth dwelling on in more detail. ROG XG Mobile is a compact external docking station that connects to the ROG Flow X13 via a dedicated connector (PCIe 3.0 x8 combo and USB 3.2 Gen 2 Type-C) on the left side of the laptop.

The dimensions of this device are only 208x155x29.6 mm and weighs 1 kg. It is more compact than some laptop power supplies.

And much more compact than most external graphics card pockets. At the same time, ROG XG Mobile has a built-in 280 W power supply.

In general, an interesting solution is obtained that allows you to organize a productive system with a monitor and other accessories at home or in the office. But at the same time, it is built around a compact laptop that is easy to carry.

I had the opportunity to do a little bit of work with the ROG Flow X13 connected to the ROG XG Mobile, and I can say that under load, the docking station is less noisy than most gaming laptops. And the X13 itself practically does not heat up in demanding games, since the main load is taken by the external video card in the docking station.

Pioneer DMH-WC5700NEX – A head unit based on a removable tablet

Advertisement
X
Subscribe to get the best Tech news and reviews of the week.
By signing up, you agree to our Privacy Notice and European users agree to the data transfer policy.
Close
01/13/2021