Tom Berenger as a US Marine Reconnaissance sniper joining a fellow civilian police sniper (Titanic’s Billy Zane) to destroy a war criminal in the Panamanian jungle.

The first half of the film is just the perfect movie of that kind. Two people – one prepared, the other not – walk through the most hostile environment. They disagree on whether it is possible to kill people with a sniper rifle at all, and the tension grows with each dialogue. In the middle of this “Heart of Darkness” for two it turns out that another sniper is following the trail of our duet …

A very bad director Luis Llosa (who started as an assistant director on the brilliant Sorcerer William Friedkin, but later directed Anaconda) jumped over his head in The Sniper, perfectly capturing the jungle, the faces of the actors, and sniper fights. The only thing that spoils the film is its, to put it mildly, anti-humanist idea, which is expressed in the finale. And also a sharp drop in tension after a brilliant scene of eliminating an enemy shooter. One of the best works of Sylvester Stallone, which I included in a selection of the most powerful films of this actor . But the extremely underestimated “Assassins” are interesting both for the direction of Richard Donner, and for the cinematography of the brilliant Vilmos Zsigmond and, most importantly, for the wonderful script of the then Wachowski brothers. The film’s weakest point is Banderas’ desperately out-playing the role of an impatient young hitman, but even he is used extremely effectively in a superbly conceived and executed ending.

In this picture, Sly himself picks up a sniper rifle only in a flashback. In the climax, a cup of coffee turns out to be much more dangerous, which his hero slowly sips in the safe walls of a financial institution – while the hero of Antonio Banderas is waiting outside with a rifle, desperately sweating, cursing and worrying. It is clear that Stallone will have to come out sooner or later under the shot – but will his opponent’s nerves withstand to wait for the right moment?

The whole scene is a master class of drama and acting, in which one hero is armed to the teeth, while the other can oppose this only with his experience, professionalism and knowledge of human psychology. We wish we had more such “unsuccessful” films! 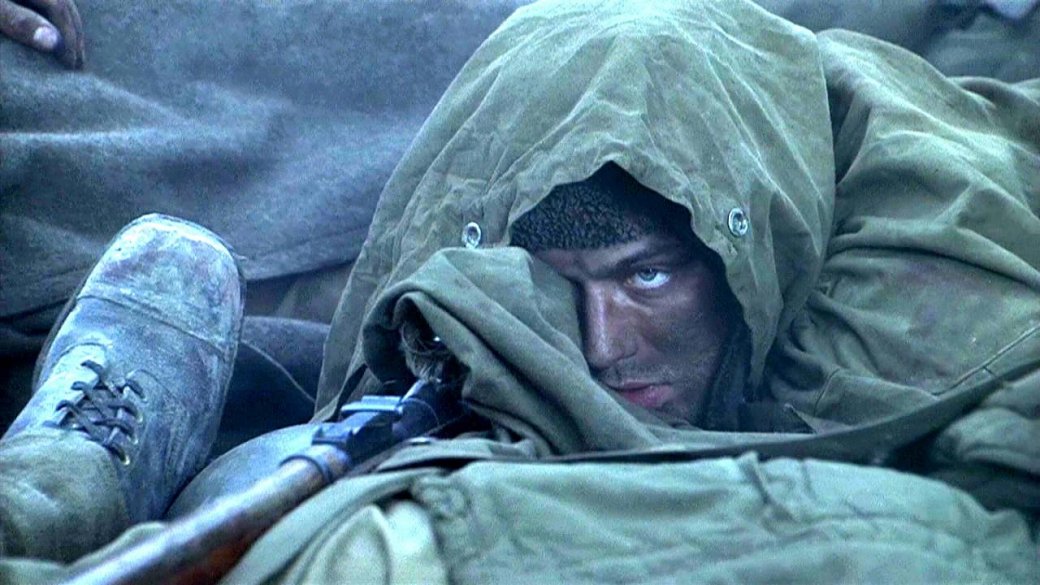 Despite all the branchy cranberries and the weakness of the script, “Enemy at the Gates” by Jean Jacques Annaud is still the best film about snipers in WWII and WWII. It is based on the most famous sniper duel in human history: during the Battle of Stalingrad, the best Soviet sniper Vasily Zaitsev challenges the German “super sniper”, known only as “Major Koening”.

Zaitseva is played by Jude Law, Kening is played by Ed Harris, which in itself is a sufficient reason to watch the film. But there is also an absolutely stunning scene of a sniper firefight in an abandoned tractor factory, which was filmed so cool that it can be revised several times in a row:

In a movie about sniper duels, it is difficult to think of anything more creative than an angle through a scope or a special effect with a flying bullet. But Anno – for all her many shortcomings as a director and screenwriter – uses the characters’ environments very creatively, including the reflections in the panels of broken glass. Clint Eastwood’s most realistic shooter movie, based on the biography of Chris Kyle, the most prolific sniper in the history of the American military. As a SEAL sniper in Iraq, Kyle killed everything that “walks and crawls on this land” (to quote another famous Eastwood film), and the film shows it quite impartially.

Jason Hall’s script dramatizes real events so that the story of the eternal killer fits into the canon of a patriotic war film – here and a protracted duel with a Syrian sniper, and the hunt for an executioner from among the insurgents, and many more situations in which Kyle appears as a knight in camouflage armor.

But the film’s craziest action scene is not fictional – Kyle actually fired such a long range shot and participated in such a desperate firefight, where a small group of Americans occupied the roof of a building in enemy territory. The complete opposite of the previous film is a humanistic, anti-war movie directed by Sam Mendes based on the memories of a less “lucky” American sniper. Anthony Swofford talks about his training and combat experience (more precisely, the lack of such) during the first war in Iraq, which ended before he had time to fire even one shot.

Against the background of the meat grinder in which snipers one generation older than Suoff will participate, his suffering looks rather ridiculous. But in the form of a movie, a very powerful statement turned out that in a war a person may worry that she did not have time to turn him into a normal killing machine.

There are many beautiful scenes in the film in the spirit of “you can’t imagine it on purpose” – what is at least an episode with wild screams from over the hill, which turn out not to be the screams of tortured prisoners of war, but a demobilization party with the burning of uniforms. Well, the opening monologue of Jake Gyllenhaal’s hero is worth memorizing it:

History. A man has been shooting a rifle for many years, then he goes to war, returns, gives the rifle to the armory and thinks that everything is over. But no matter what he did afterwards – he loved a woman, built a house or changed his son’s diapers – his hands will always remember the weight of the rifle. By Brian Anderson
X
Subscribe to get the best Tech news and reviews of the week.
By signing up, you agree to our Privacy Notice and European users agree to the data transfer policy.
Close