What is Dolby Atmos? Everything you ever wanted to know about Dolby Atmos 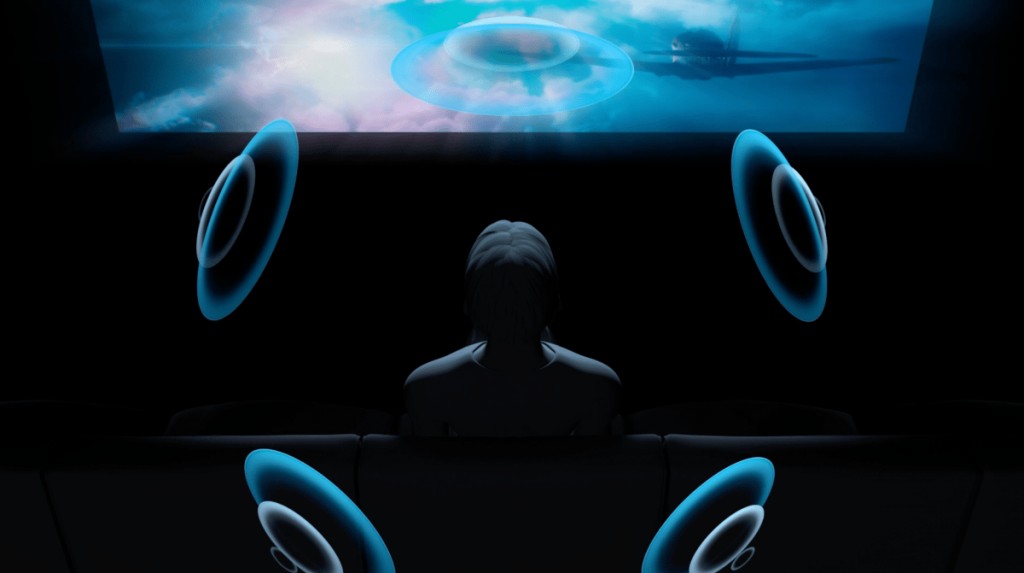 The three-dimensional object-oriented format of Dolby Atmos soundtracks sounds mysterious and frightening in its complexity. Originally developed for commercial cinemas, the new standard is being actively implemented in home theaters. Is it hard to get Dolby Atmos support in your home? And what will it give in the end? Let’s figure it out. 1. What was before Dolby Atmos?

Before the introduction of a truly three-dimensional image into commercial film distribution, it is possible to completely immerse the viewer in what is happening on the screen through another channel of information flow – hearing. For this, various surround formats are developed in which movie soundtracks are prepared. These technologies were rapidly developed in the 80s of the last century with the development of matrix algorithms for encoding audio tracks. Up to this point, for commercial cinemas, the stereophonic accompaniment of films was the basic option.

The new technology used the same two channels to record the soundtrack, but the information of additional audio channels – the center and two rear ones – was mixed into the stereo track. Another channel – low-frequency effects, was highlighted by the usual filtering of the main channels. In the consumer sphere, this format is called Dolby ProLogic. Since the encoding and decoding process was purely analog, this format could not provide satisfactory channel separation. At the same time, it made it possible to use a conventional stereophonic path without any problems, which greatly facilitated its distribution.

In the late 1990s, the fully discrete digital formats Dolby Digital and DTS entered the scene, offering six (later eight) independent channels, allowing for 5.1 and 7.1 surround systems. It was in these formats that soundtracks were recorded on DVDs. With the move to Full HD video and the advent of Blu-ray discs, Dolby and DTS have introduced new multi-channel lossless formats for soundtracks – Dolby TrueHD and DTS-HD Master Audio.

Dolby TrueHD supports up to eight audio channels up to 24-bit / 192 kHz. In this case, the bit rate of the resulting digital stream can reach 18 Mbps. Competing DTS-HD Master Audio also offers up to eight audio channels up to 24-bit / 96 kHz (six-channel encoding up to 24-bit / 192 kHz), but traditionally allows for higher bit rates, which can be up to 24.5 Mbps /with. At the same time, both formats provide backward compatibility with Dolby Digital and DTS – if your player or AV receiver does not support lossless formats, then they can use the so-called “core” of the track, receiving Dolby Digital or DTS with their standard 640 kbit bitrates / sec or 1.5 Mbit / sec.

Atmos is an object-oriented 3D sound technology developed by Dolby, which differs significantly from matrix and channel-by-channel encoding / decoding algorithms. In this case, sound information is not only recorded through different channels, but is also accompanied by metadata about the position of virtual sound sources in space. Each such object is characterized by three-dimensional coordinates with changes in time, which makes it possible to obtain a homogeneous sound environment in the cinema hall with the highest detail. The Atmos standard supports up to 128 such objects, superimposed on background noise, which are encoded in the usual way per channel.

To implement Dolby Atmos in your home cinema, in addition to replacing the AV receiver or processor with a model that supports the new soundtrack formats, you will have to significantly upgrade your surround sound system. To get a truly three-dimensional sound picture, it is necessary to add several ceiling sound channels to the usual surround sound configuration, increasing the vertical resolution of the sound canvas. 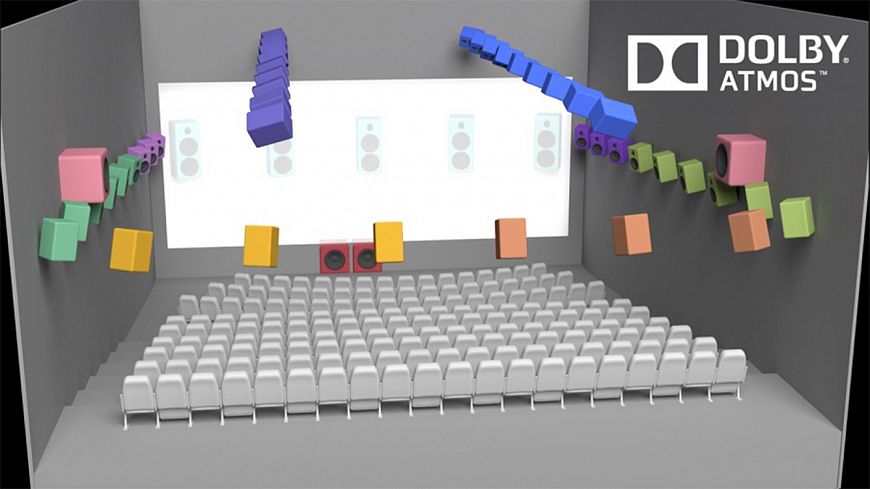 3. How many channels does a surround system need to implement Dolby Atmos?

The Dolby Atmos version adapted for home theaters allows for a maximum surround configuration of 24.1.10 (24 surround speakers, one or more subwoofers and 10 overhead speakers). In real installations, the most common configurations are from 5.1.2 to 9.1.4.

And here you need to pay attention to the implementation of the Dolby Atmos decoder in your AV receiver or processor. If you do not rule out the possibility of expanding the surround system in the future, it is better that the receiver or processor is equipped with a multichannel preamp output with as many channels as possible. For mass models, this is usually either 7.2.4 or 9.2.4. In this case, the number of amplifiers in the receiver may be less. 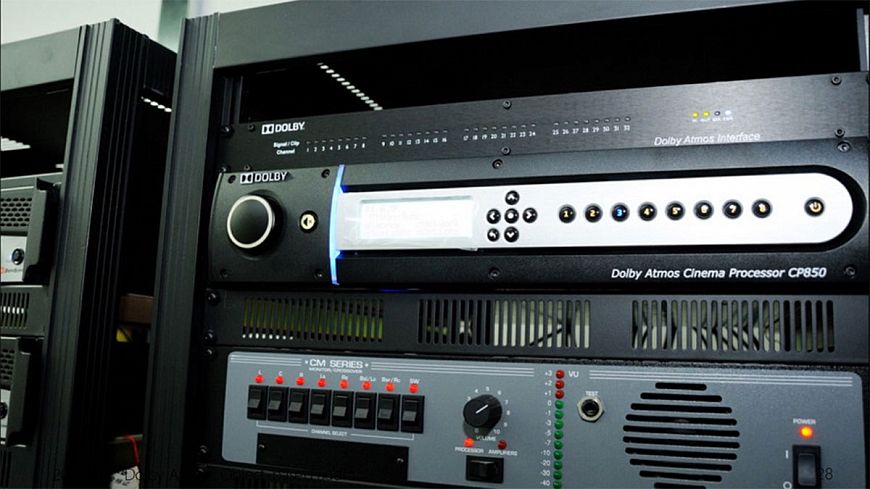 4. What audio compression algorithms does Dolby Atmos use? With or without loss? 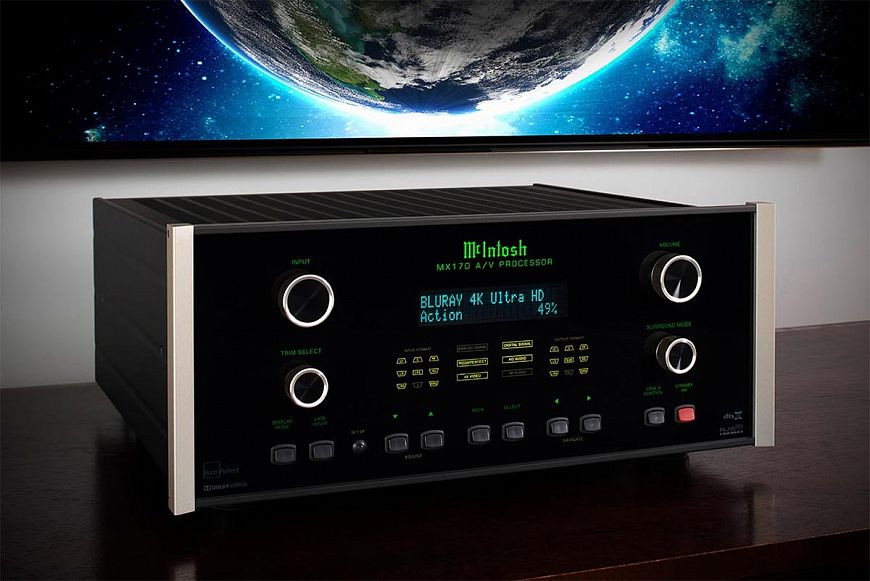 5. Do I need to change components in my home theater system to implement Dolby Atmos?

Implementing Atmos 3D sound in your cinema will require upgrading its equipment. First of all, this concerns a multichannel receiver or processor that decodes soundtracks – this component must support Dolby Atmos. At the same time, for a source in the system – a Blu-ray player or a multimedia player, it is enough to be able to output “digitally” via HDMI soundtracks in Dolby TrueHD – no special Atmos support is required here.

But the most significant changes will affect the surround sound system. And if the existing 5.1 or 7.1 acoustics configuration can be used with Atmos “as is”, then for the “ceiling” channels you will have to install additional speakers and provide them with amplification. The standard calls for the use of two or four overhead speakers, which are either ceiling-mounted or under-ceiling mounted and directed towards the seating position. 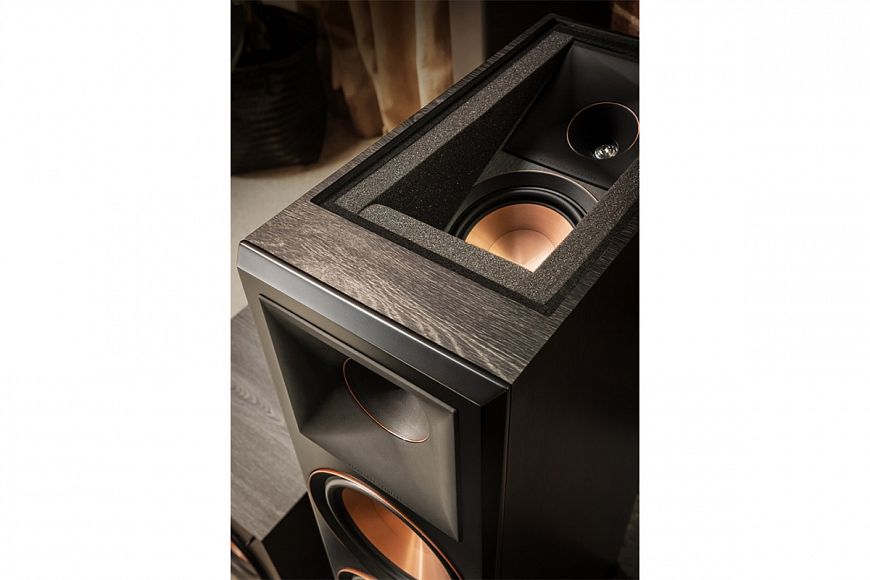 6. Is it possible to do without mounting acoustics on the ceiling?

Installation and connection of speakers on the ceiling is a rather complicated and sometimes impossible procedure under specific conditions. An alternative can be the use of special speaker systems designed for home theater Dolby Atmos with a separate high-altitude channel and emitters directed to the ceiling. In addition, major speaker manufacturers are releasing additional ceiling modules for existing speaker models.

In this case, the idea is to use sound waves reflected from the ceiling. If Dolby’s recommendations are followed, this option for the implementation of overhead channels will practically not yield to installations with real “ceiling” acoustics. Dolby recommends cinema ceiling heights between 2.4 and 4.2 meters. In addition, the ceiling finish should reflect sound waves well. Fortunately, 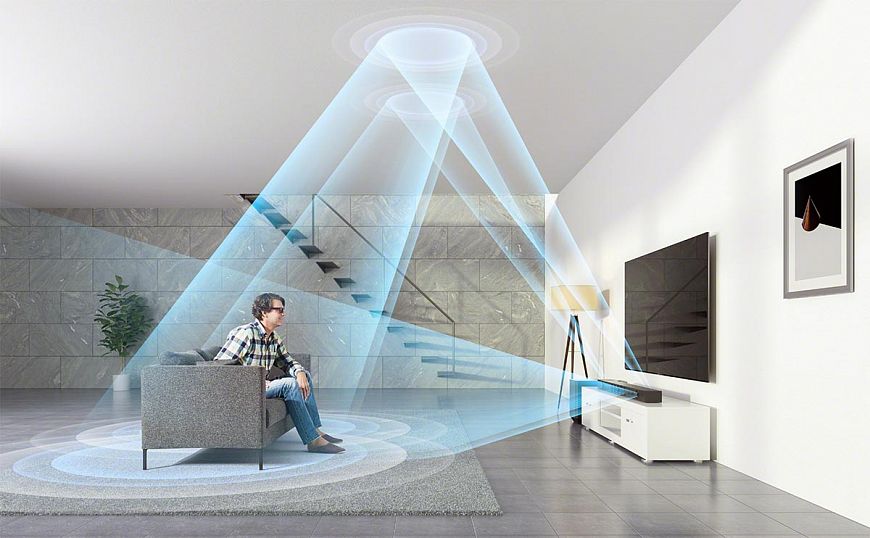 7. How is Dolby Atmos support implemented in soundbars?

Soundbars also use the reflection of sound waves from the ceiling in the implementation of the upper channels. Moreover, for a soundbar, this was initially a standard technique – even before the advent of three-dimensional sound formats, virtual surround sound was achieved due to sound reflections from the walls of the room. In Dolby Atmos soundbars, some of the emitters are directed upward, increasing the vertical resolution of the sound picture.

The most effective in creating a three-dimensional sound field are so-called sound projectors – soundbars with several dozen speakers, each of which is controlled by a separate amplifier, and a special audio processor prepares information for such an array of emitters. In a room of the correct configuration with walls and ceiling that have the necessary reflective properties, such a soundbar is quite capable of replacing a 7.1.2 surround sound system. At the same time, the soundbar is not only much easier to install and configure, but also more organically fit into the residential interior, but, most likely, it will be significantly cheaper. 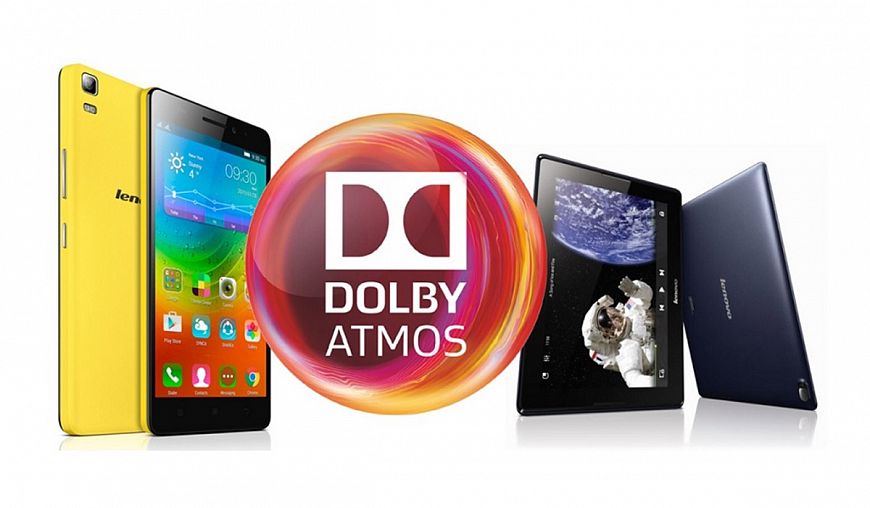 8. I have Dolby Atmos mode in my smartphone. What does this mean?

Dolby is leading, among other things, the development of audio formats for portable technology, focused on the use of headphones. One of these formats is Dolby Atmos. In the implementation for portable gadgets, the upper channels, like the surround channels, are formed virtually due to special DSP processing based on psychoacoustic effects. By activating the Dolby Atmos mode on your tablet or smartphone, you can get three-dimensional sound even when listening to a regular stereo track. 9. How can you access movies and programs in Dolby Atmos today?

If we talk about home theater, then the introduction of the three-dimensional Atmos format began with releases on UltraHD Blu-ray discs. And here you need to make a reservation – strictly speaking, there is no strict binding of the soundtrack format to the type of disc and video resolution on it. That is, technically, nothing prevents you from recording an audio track in Dolby Atmos on a Blu-ray disc with Full HD video.

Moreover, there are many such releases. But historically, the advent of Dolby Atmos almost coincided with the proliferation of 4K movies on UltraHD Blu-ray discs, and it is on these discs that the new 3D soundtrack is most often found. But the main locomotive in promoting Dolby Atmos (as well asUltraHD video) have become increasingly popular streaming services. Streaming giants like Netflix or Apple TV + offer releases with Dolby Atmos sound. A tangible impetus in the spread of the format will be the introduction of fifth-generation 5G cellular networks, which offer significantly higher broadcast speeds for digital content. 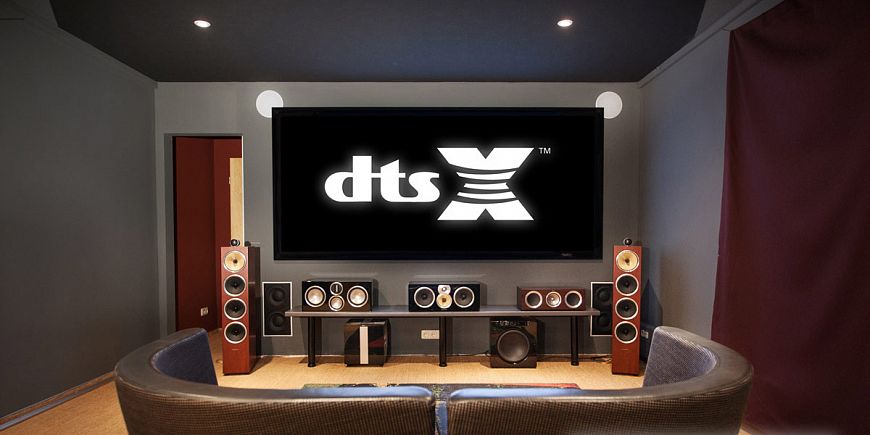 10. Are there alternative 3D audio formats and how are they different from Dolby Atmos?

Dolby’s eternal rival, DTS, did not stand aside with the advent of 3D surround sound standards with the DTS: X format. This technology, like Dolby Atmos, is not about channels, but about audio objects. However, unlike Dolby Atmos, DTS: X does not clearly define the number of speakers in your surround system – a DTS: X decoder in your receiver or processor will optimally distribute the sound information based on the available channels. That is, the DTS: X standard does not provide recommendations for the configuration of the surround acoustics. DTS believes that object-oriented codecs are good because they are not tied to specific speaker configurations.

Thus, the minimum surround system configuration for DTS: X is 2.1. It is clear that physics is difficult to defeat, and the more advanced the surround sound system you have in your cinema, the more expressive you will get. It is impossible not to recall the third format Auro 3D – it was the company Auro Technologies that became the pioneer of three-dimensional soundtrack formats, proposing an object-oriented approach to building a surround sound field and the use of height channels in a surround sound system.

Instagram will require you to enter your date of birth: AI will check if you are lying