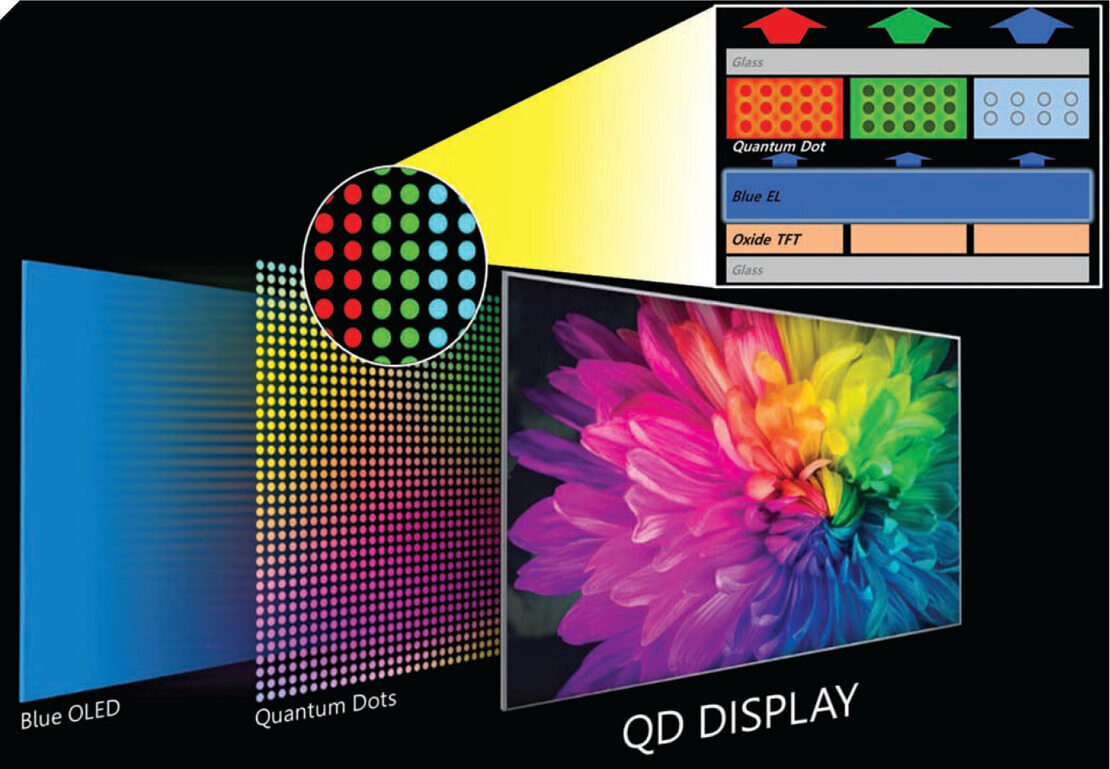 What is Quantum Dot from Samsung and how does it work?

After the presentation of a new type of organic LED display with quantum dots from Samsung Display, a lot of materials appeared on the Web with conflicting data and conclusions, which not only did not clarify the principle of its operation, but also added confusion to the understanding of which TVs Samsung Electronics will produce.

For example, some sources say that the maximum brightness of QD-OLED will be 1,000 nits, while others call a figure of 1,500 nits. Some say that a little later Samsung will start producing TVs based on them, others say based on WOLED from LG Display. In order to at least partially dispel this fog, we decided to talk in detail about this type of display and the prospects for its use in the near future.

To begin with, the confusion about the new screens was made by the Samsung Display division itself. Previously, the company called its development of displays based on organic quantum dot light emitting diodes QD-OLED. Now her name is none other than QD-display, as opposed to “ordinary” OLED TVs, with which they allegedly have little in common.

That is, Samsung did exactly the same as at one time with the designation of LCD TVs with LED backlighting, when they were given the name LED TVs in order to distinguish them from the background of the “ordinary” LCD models of that time with fluorescent lamps. The company’s motives are clear: it wants to get away from the association with OLED TVs that are prone to burn-in, which she herself constantly talked about, favorably highlighting her QLED TVs.

However, whatever you call it, a QD display is essentially an OLED display, but with a slightly different design. Moreover, in terms of structure, it is more similar to WOLED matrices from LG than to AMOLED from Samsung, which are used in smartphones.

The diagram provided by the Samsung Display division itself may be misleading – this is done intentionally in order to emphasize differences in displays.

As already mentioned, the main radiating element in the QD-display are blue organic light emitting diodes deposited on the substrate by offset printing – simultaneously over the entire area of ​​the sheet (mother matrix).

On top of this layer is a structure with cells, two-thirds of which are filled with quantum dots – they are applied by inkjet printing to increase the feed accuracy and reduce the consumption of such a valuable material.

The result is a display, each pixel of which consists of three, not four sub-pixels, as in WOLED. In this case, the blue component of light is formed directly by organic LEDs, while the green and red components are formed by quantum dots.

Official materials emphasize that the QD-display, unlike LG’s WOLED matrices, does not use light filters, which increases efficiency, that is, in fact, brightness. However, this is not so – filters are certainly present.

They are needed to weed out blue light in red and green subpixels, because quantum dots cannot completely absorb it and use it for their own glow – they glow, so to speak, in parallel.

In addition, on top of the layer with quantum dots, there is another light filter covering the entire screen area, which prevents the penetration of light from the environment to the quantum dots so that they are not excited from it and start glowing randomly if the user, say, turned on a chandelier in the room.

This filter also reduces the effectiveness of the panel, but Samsung Display’s presentation does not mention it. But the operation of QD-display and WOLED is schematically shown when displaying white light, where only white (transparent) subpixels glow in WOLED, which, of course, is not true – when white color is displayed in WOLED, all four subpixels glow.

In addition, the creators of the presentation included a polarizing layer in the WOLED structure scheme, which, according to their idea, is also not needed and only reduces efficiency, because the QD-display does not have it.

The layer of polarizers in WOLED panels was indeed present, but quite a long time ago – when OLED TVs could show 3D video using glasses with passive filters. Today, polarizers are not installed in OLED panels due to the death of 3D video, and OLED panels do not need polarizers to display ordinary 2D video.

At the launch in Las Vegas, the QD-display was compared to an unnamed 2021 OLED TV, which, despite all the tricks, was guessed as an LG G-series model, as well as to a certain FALD-backlit LCD model. At the same time, they all worked in Vivid mode, which, although considered the brightest in terms of colors, is rather formed by the marketers of each manufacturer according to their personal preferences, and not based on charts.

That is, we have yet to find out the real advantage in color reproduction, but until this happens, it makes sense to pay attention to the graphs from the presentation and draw some conclusions, given the design features and properties of materials used in “organic” displays.

For example, it is stated that the use of quantum dots and the absence of white subpixels and color filters, which are found in WOLED matrices, makes it possible to obtain purer colors and, as a result, improved color rendering in a QD-display. In support of this, two spectrum graphs are given: with elongated and almost equal peaks for QD-display and more gentle waves for WOLED.

They look relatively plausible. For example, this is how my colleague from IXBT.com measured the spectrum of the LG OLED48C1 OLED TV.

The QD-display spectrum, given the nature of quantum dots, should also look exactly as shown in the graph – these dots just give similar level peaks in a very narrow frequency range.

At the same time, it should be taken into account that all graphs are obtained by approximation, that is, in reality, the spectrum does not look like a smooth parabola, but a set of narrow columns, because quantum dots emit light of a strictly defined wavelength.

In terms of measurement, this does indeed give “purer colors” and high levels – a greater overall level of brightness. However, such a spectrum does not guarantee the visual richness of color shades on the screen, simply because there are simply no intermediate colors in the spectrum.

Moreover, Samsung Display claims that their new creation, unlike other displays, meets the Rec.2020 standard. To achieve it, you need radiation at those wavelengths that are even further from the center of the color gamut than DCI-P3 and even more so Rec.709, and this further exacerbates the situation with intermediate shades.

To get an idea of ​​what this looks like in practice, just look at the image from inexpensive LED projectors, which use few diodes (usually only three), and the entire palette is calculated from a “spectrum” of actually three wavelengths.

In this regard, it should be noted that modern LCD TVs with quantum dots do not have such a problem in principle. The glow of these dots adds color tones to the already existing spectrum of white LEDs, which use a yellow phosphor (phosphor) in their design, and it has a rather smooth, rather than a line characteristic with many shades in between.

Despite the fact that the above method of spectrum formation and the use of quantum dots can also significantly increase the peak brightness of displays (remember how it has grown in modern LCD TVs), at the presentation during CES 2022, Samsung Display did not confirm the claimed value of 1 500 nits.

Various patterns were measured, but the show’s organizers settled on testing the brightness at 10% of the screen area, where a value of 1,000 nits was obtained for the QD-display and 800 nits for the WOLED. At the same time, it was stated that in an area of ​​​​3% of the screen area, the difference in brightness will be even greater.

However, corrosive journalists noted that with a larger area of ​​screen illumination (including the ANSI test), the compared displays had actual parity in brightness.

What practical application awaits QD-display in the near future? Apparently, Samsung is not going to travel around exhibitions for several years with prototype TVs based on new panels, as LG did when it launched WOLED production.

However, until recently, Samsung Electronics did not have any concrete information about plans to use QD-display in their TVs. Just last week, information leaked to the Web that the company nevertheless showed a prototype of its TV on the new panel at the exhibition, hinting on the sidelines that it plans to mass-produce QD TVs towards the end of the year.

True, at the same time, Samsung has already officially announced that this year they intend to release a line of TVs on WOLED panels from LG Display, thus confirming the rumors six months ago about the conclusion of an agreement between the two competing companies.