Audi has expanded its range of electric vehicles with a new model – the premium e-tron GT sedan ( not to be confused with the e-tron coupe-crossover ). The novelty is built on the same platform (PPE, Premium Platform Electric) as the Porsche Taycan, which in its first year became one of the best-selling Porsche models with a circulation of 20,000 units . And she will have to compete with the same Tesla Model S, which recently received a major upgrade , Lucid Air and others.

The Audi e-tron GT concept was unveiled back in 2018 , after which the car was shown a couple more times, including a promo in Avengers: Endgame . And now, three years later, the e-tron GT has become a production car from the 2022 lineup. Both versions provide such excellent dynamics thanks to a twin-engine four-wheel drive unit powered by a 93 kWh battery pack (85 kWh net capacity, in all electric vehicles some of the available capacity is reserved and locked to increase battery life). Among other things, the new Audi e-tron GT inherits the 800-volt architecture from the Porsche Taycan and also supports 350 kW chargers. At the same time, the peak charging power, like that of the Taycan, is limited to 270 kW, which guarantees the preservation of battery life.

Audi claims that in just five minutes on a charge, a high-speed charging network like Volkswagen’s Electrify America will provide the necessary charge to travel 100 kilometers.

The range is “more than 488 km” for the basic e-tron GT according to the WLTP measuring cycle. In a US press release, Audi lists 383 km and 373 km for the e-tron GT and RS e-tron GT, respectively, but these are not official EPA estimates. The interior of an electric car is a realm of screens, touch and physical keys, combined with classic elements of traditional German design. There is a large 12.3-inch display in the instrument cluster and an additional smaller (10.1-inch) display in the center console. Both are controlled by Audi’s latest infotainment system. This means there is an LTE Advanced chip to create an on-board Wi-Fi hotspot, Here’s map-based navigation, a companion mobile app for controlling door locks and other features, and CarPlay and Android Auto support.

The rest can be noted adaptive matrix LED headlights LED Audi Matrix, an additional display that projects information on the windshield, the Bang & Olufsen audio system – all this is not included in the basic package, but is available for a fee.

The more expensive RS model includes some of these features, but the price can also go up depending on which wheels are fitted or if the buyer opts for a carbon fiber-reinforced roof over the standard glass option. Also available as an option are noise-insulating glass on the side and rear windows and massage seats. In general, any whim. Below are a couple more official renders to get a closer look at the e-tron GT’s interior and exterior design. 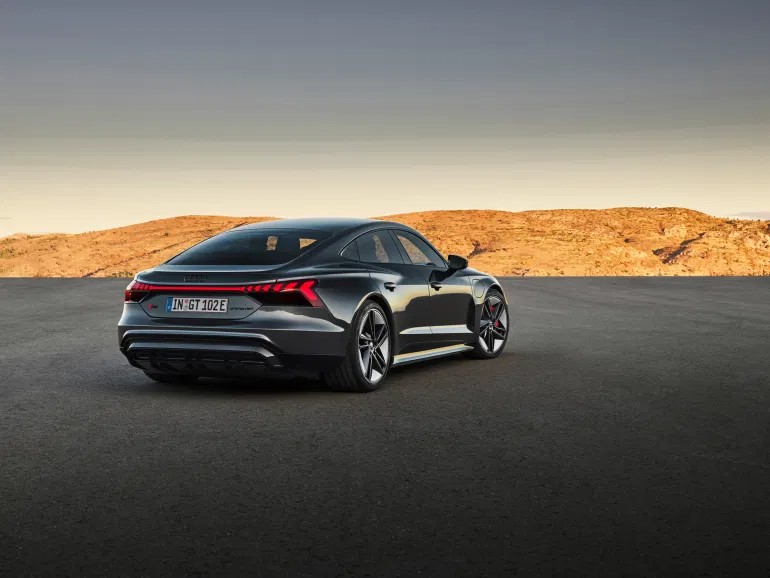 Microlino: Swiss electric city car with a range of up to 200 km is coming this september