Vinyl records continue to enjoy great popularity even in the digital age. So why not build a turntable in your car? Apparently, that’s what Lexus thought and decided to make a custom IS Wax Edition.

Unfortunately, the car was released in a single copy, so don’t expect to be able to order one from the manufacturer. The IS Wax Edition was developed by Lexus in cooperation with the SCPS music studio. Pitchfork also took part in this project . 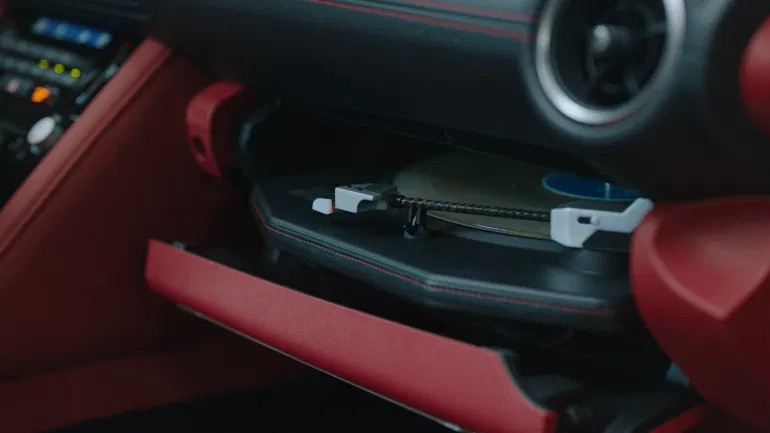 Obviously, integrating a turntable into a car’s interior is a tricky undertaking. The car constantly emits vibrations, the source of which, in many respects, is the road surface (just imagine what will happen to a turntable and a record on our roads). In addition, vehicle components are constantly affected by acceleration, braking and cornering. However, SCPS has created a custom turntable using carbon fiber and aluminum 3D printing technology. It is mounted on a special silicone cushion to absorb vibrations and shocks. The stepper motor and tonearm allow the 12-inch plate to rotate without interruption while riding at speeds up to 130 km / h. The player was placed in the glove compartment – when you want to listen to music, it partially slides out of the compartment. The car was also equipped with a 17-speaker Mark Levinson premium audio system that supports 7.1 surround sound. System power – 1800 W.

Lexus and Pitchfork also partnered with music producers Madlib and Kaytranada, who released a joint single for the IS Wax Edition.

JBL invites to a party with new PartyBox speakers

GUIDE: How to choose an electric scooter in 2021?

Elon Musk commented on the fatal accident with Tesla: The autopilot was not turned on

By Roy Wollenbeck
X
Stay Updated! YOUR SOURCE FOR TECH BUYING ADVICE
Sign up and read everything without ads