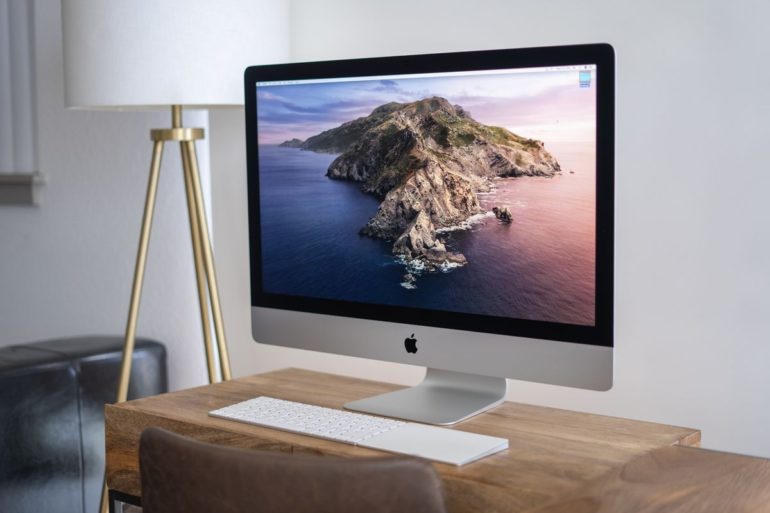 The anticipation of the iMac (2021) release is noticeably hanging in the air. The new iMac series will almost certainly jump to Apple’s new chipsets, making the 27-inch iMac (2020) the last Apple computer to use Intel processors. According to rumors, there may be some changes in the diagonal of the screen for the larger of the two models, as well as some design changes. In fact, some rumors believe the iMac will be unveiled today at the Apple Spring Loaded event (April 20).

And while the smaller 21.5-inch iMac (2019) doesn’t get the much-anticipated update in 2020, the 27-inch iMac did it. The large model has received a significant upgrade, offering solid-state memory in all configurations, 10th Gen Intel Comet Lake processors, fast AMD Radeon Pro graphics and up to 128GB of RAM.

In addition, Apple has integrated studio-quality microphones and a 1080p FaceTime HD webcam. Users willing to invest more in the new 27-inch iMac (2020) could use a nano-textured panel on the screen. Like a Pro Display XDR , this glass coating completely prevents reflections and glare on the screen, regardless of ambient lighting conditions.

With rumors abounding and a likely announcement soon approaching, we could see a new design for the iMac (2021), not to mention new colors – for the first time since the iMac G3. We’ve gathered all the rumors in one place, tied a specific release date to help you stay on top of what to expect from the iMac series this year.

In mid-2020, Apple first announced plans to ditch Intel for its entire Mac line in the coming years. The first computers based on Apple’s own chips last fall were the MacBook Air M1 (2020) , MacBook Pro 13 M1 (2020) and Mac mini M1 (2020). In 2021, in addition to the next generation iMac, Apple is likely to launch the second generation MacBook Pro 16, as well as the all-new MacBook Pro 14 and several other Macs based on the Apple chip.

The iMac is not expected to arrive until the end of the year this year. However, two events suggest that a new iMac is imminent this year.

The recently discovered code in the beta version of macOS Big Sur suggests that at least two 2021 iMacs will hit the market in the very near future: the iMac 21.1 and iMac 21.2, codenamed J456 and J457, respectively. In addition, in March, Apple began to consistently remove existing iMac models from the market.

We now know that the next Apple event is scheduled for today, April 20. While the Spring Loaded streaming event is expected to focus on next-gen tablets (including the new iPad Pro ) and long-talked about Apple Airtags, new iMacs could be announced as well.

If they don’t come out today, new computers could hit the Worldwide Developers Conference (WWDC) on June 7th.

While the 2021 MacBook is likely to remain Apple’s most anticipated computer this year, the new 2021 iMacs are also grabbing attention.

Back in January, Bloomberg’s Mark Gurman announced that this year’s iMac lineup is undergoing design changes for the first time in nearly a decade. The new models could get a design similar to the Apple Pro Display XDR.

Another notable change: the iMac (2021) could be the first Apple desktop to be available in multiple colors after the iMac G3. According to renowned Apple insider John Prosser, this year’s iMac will be offered in five colors, just like the iPad Air (2020), which include silver, gray, pink, green, and sky blue. Unfortunately, no word is known about Apple bringing back the iconic “Bondi Blue”.

Aside from the anticipated design changes and a new color set for the 2021 iMac, at least one model this year may be equipped with mini-LED panels – a new solution many see as a replacement for classic OLED panels.

As the guys at iMore explained in September 2021:

“Basically, this technology uses about 10,000 tiny 200 micron LEDs, grouped into local dimming zones, which allows them to approach inky black, reaching contrast figures similar to OLED, but without the risk of burnout, various shifts, white color changes. that the existing OLED suffers from.

The new technology supports adaptive refresh rates – what Apple calls ProMotion on the iPad Pro. This feature allows the screen to bump up to 120Hz refresh rate when scrolling through websites or documents, or playing tricky games, but the screen can also drop the refresh rate down to 48Hz and even 24Hz when you’re watching 24fps content in Final Cut Pro and TV + ”.

Not only that, Face ID may be first announced on iMac computers. And as with previous iMacs, we expect to see a good selection of ports, including USB-C with Thunderbolt 3 support .

It is not yet known what will become of the 27-inch iMac (2020). Perhaps the all-in-one, which was launched only in August, will remain on the market even with the release of two new iMac models. It could also follow the route of the iMac Pro, and will be discontinued.

Stream Xbox games to your iPhone