TerraMaster , specializing in the development of data storage technologies, announced the availability of the new F8-422 NAS. The TerraMaster F8-422 is an 8-seat 10 GbE NAS with a 4-core processor that dramatically improves data efficiency with 10 Gb speeds. This is the most balanced 8-seat NAS to date , and is ideal for high-volume workloads such as 4K video , high-definition photos and 3D animation.

The TerraMaster F8-422 is powered by a powerful 4-core Intel® Celeron® 1.5 GHz processor and features an ultra-fast 10 Gb Ethernet network interface that can transfer data over existing Cat6 / 6A network cables , and two 1 Gb Ethernet ports for network integration … AES NI hardware encryption and 4K support are already built into the product configuration. The maximum internal storage capacity is up to 144 TB (8 x 18 TB drives).

The storage supports RAID 0, RAID 1, RAID 5, RAID 6, RAID 10, JBOD and SINGLE modesallowing you to choose the optimal combination of speed and safety. With eight Seagate IronWolf 6TB drives in RAID 5 mode, read / write speeds can be up to 610MB / s. Various NAS parameters and user accounts are managed through the TOS 4.2 software . The latest version of the TOS 4.2 operating system has a friendly user interface, enhanced support for components and monitoring capabilities, and a number of new features such as Wake-on-LAN (WOL) , IPv4 and IPv6 support , and improved SSL security . 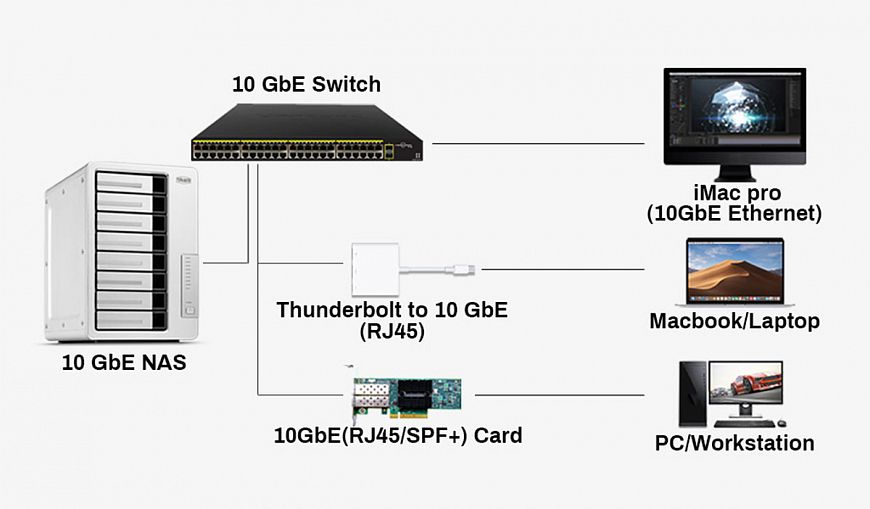