SSD Solid State Drives that will work with PlayStation 5 With the beta firmware, testers are now able to insert solid state drives into PlayStation 5 from other manufacturers. Initial tests show they give better results than Sony’s own PS5 hard drive. In this article, we will explain what advantages third-party drives have, give examples of such SSDs, and state the requirements for internal drives for the PlayStation 5.

M.2 NVMe SSDs with PCIe Gen 4 can now be inserted into a PS5 console if that console is running beta firmware. Some manufacturers even mentioned the name of their compatible models. These include the Seagate FireCuda 530 and WD_Black SN850. There are certain minimum requirements for such drives.

For example, SSDs must be capable of at least 5500 MB / s read speed. Colleagues from Digital Foundry carried out the first tests and got quite interesting results. They used a Samsung 980 Pro with a heatsink that was actually meant for a model from the Gigabyte Auros line.

Sony also recommends cooling SSDs to ensure adequate performance under load. In the test, the PS5 console directly assigned the Samsung 980 Pro a read speed of about 6500 MB / s. This is below the manufacturer’s specifications, but should be sufficient. After installation, this disk appears correctly on the system, and also allows you to move already installed games.

In addition, Digital Foundry found that the Samsung 980 Pro can boot faster in some games. This may be due to the fact that Sony’s internal SSD has to run the background processes of the operating system in parallel.

Expansion of the PlayStation 5

With only about 670GB of free space on the PlayStation 5’s internal factory SSD, many gamers will find it helpful to increase the storage capacity. Early tests from Digital Foundry show that increasing the capacity of an SSD shouldn’t result in a performance hit.

The only negative surprise is the reverse process. Moving games from a third-party M.2 SSD back to an internal drive may cause transfer rates to drop. It is possible that this is due to the beta firmware.

If you are currently running a PlayStation 5 (PS5) console with the current beta firmware, then there is the option to expand the console’s memory using an M.2 SSD hard drive. There are several PS5 compatible M.2 SSDs posted below. It is possible that someday Sony will be able to activate the memory expansion itself and release larger capacity SSDs for the PlayStation 5.

But so far, even such statements have not been received in this regard. For now, beta firmware users can expand the console’s memory by installing compatible M.2 SSD hard drives. However, there are a few things to keep in mind. The end of the article lists the requirements for solid state drives and their form factor. In addition, the PS5 must have beta firmware installed before installing the SSD.

Replacing the hard drive in PlayStation 5 also has some pitfalls. In general, it is not as convenient as, for example, memory modules Xbox Series X | S. On the plus side, however, the user is free to choose M.2 SSD hard drives (within Sony specifications).

Samsung 980 PRO models are a good and inexpensive choice. They are available in capacities ranging from 250 GB to 2 TB and range from € 75 (€ 30 cents per GB) to € 365 (€ 18 cents per GB). Unfortunately, there is no cooling in these models. Therefore, you will have to install a heatsink on the hard drive. The Akuoly aluminum heatsink is quite popular and does not exceed the maximum dimensions specified by Sony. 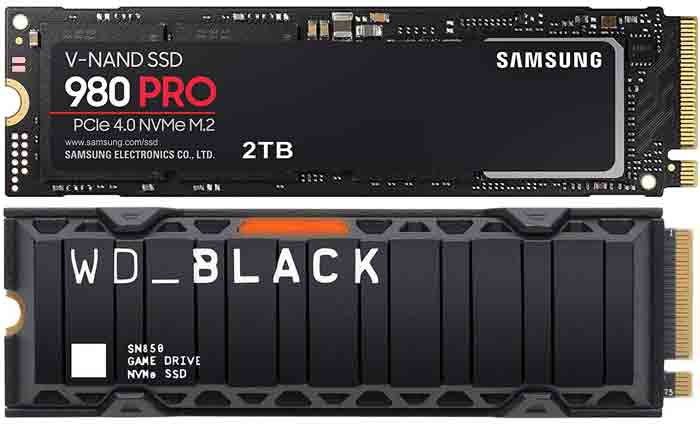 The WD_Black SN850 with heatsink meets all Sony requirements for a compatible SSD hard drive. It has read speeds up to 7000 MB / s. Its volume ranges from 250 GB to 4 TB. So that users have a great opportunity to update their PS5 according to their needs and budget. Currently, not all models are available for sale.

The Adata XPG GAMMIX S70 Blade currently also meets all of Sony’s requirements. The memory is equipped with a heatsink, so there is no need to worry about additional cooling. The form factor is fine too. The only question is, how much does the device cost? At the time: August 2021, a 1 TB model is offered in the region of $270. The 2 TB model costs around $400.

Not every M.2 SSD can be installed in the PlayStation 5 (PS5) expansion slot. The manufacturer provides very precise specifications that an M.2 SSD must meet in order for it to work with the console. So, an M.2 solid state drive for PS5 must meet the following requirements:

And the last thing. This article is more news-driven than technical. It all depends on when you read it. Whether there will be compatibility after the next firmware, which will replace the beta version, is unknown to us. Therefore, all replacements of native disks with compatible ones you will do at your own peril and risk.