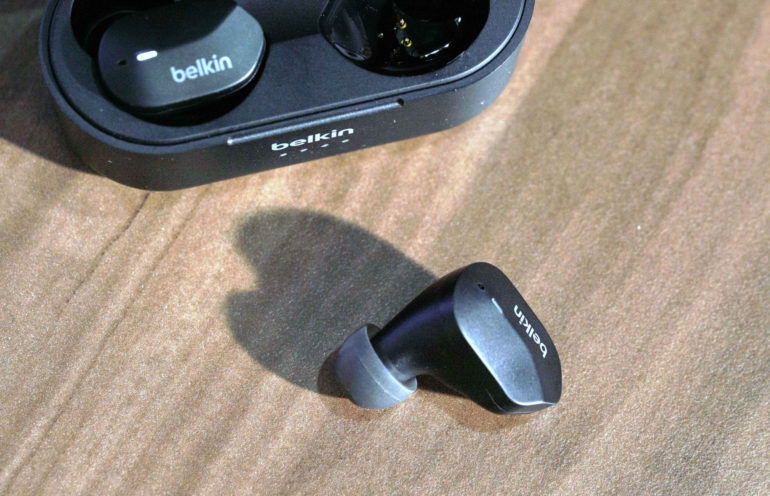 Wireless earbuds have become very popular in recent years due to the convenience and often the quality they offer. Personally, I’m still stuck with wired earphones, but I’m starting to appreciate the whole concept more and more –  and these Soundform True Wireless from Belkin are partly responsible for that.

Belkin Soundform True Wireless has a price tag of around 60 euros. What do you get for that? Well, let me tell you Belkin hasn’t been holding back …

For example, you get two earphones with Bluetooth 5.0, AAC and SBC audio codec – AAC is automatically selected if possible – that last 5 hours on their own battery, and if you put them in the sturdy supplied case between listening, there will be another 20 hours. Bee. When the battery in the case is empty, which you can see from the white LEDs on top, charging is easy with a Micro USB cable. The Soundform TW comes with 3 different sizes of silicone caps to make sure everyone can use them comfortably. What’s good to know, though, is that you can use your own caps too, as they use the same fastening system as about 99 percent of the market.

In addition to comfort and a good fit, they also offer a moisture-repellent rating in the form of IP5X. That is very pleasant for the people who get quite moist while exercising, such as the undersigned. 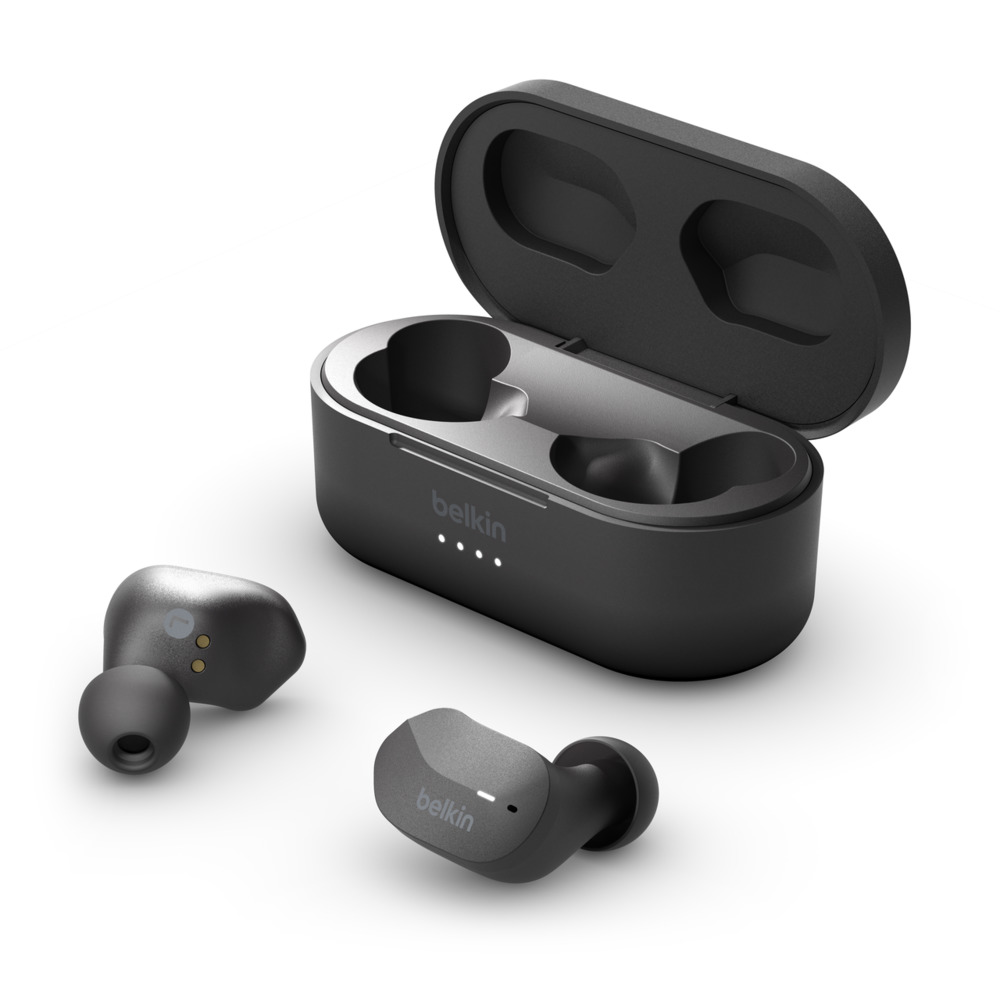 Of course they wouldn’t be wireless earbuds if they didn’t also have the necessary control functionality on board. So you can do everything by simply touching them; by touching them once to the right or left you can increase or decrease the music, with 2 touches you pause the song and with 3 touches you skip to the next song. You can also make calls with the built-in microphone, when you receive a call you can answer or hang up by touching the left or right earbud twice. If you do not want to record, you can touch the left or right earbud for 2 seconds, if you do not receive a call, you can use this touch to conjure up your digital assistance. 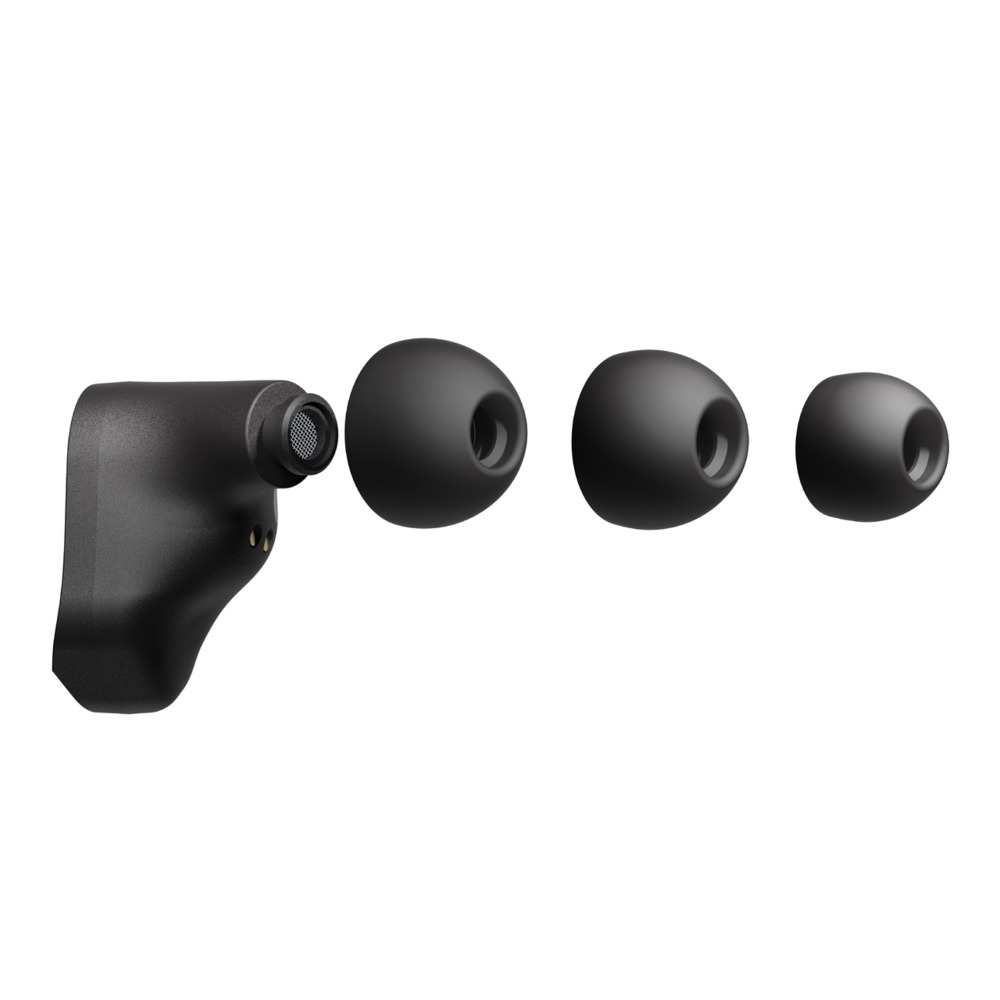 To be honest, I didn’t expect a groundbreaking sound because given the price and all those features mentioned, it must have been cut somewhere, right? That is not so bad, because I was genuinely surprised when I first heard the Soundform True Wireless at work. Especially after letting them play in for a while and I noticed that everything had ended up more in place; funny how that can work.

If I had to describe the sound of the Soundform True Wireless in one word, it would be “active”. But of course you are not helped with one word. Some extra explanation; I get the feeling that Belkin has chosen to tune the Soundform TW towards the Harman Curve. People who have heard of that before will know exactly what I mean, but let me explain that further. The Harman Curve brings out the low and the high a bit more and provides some roll-off with the latter to create a bit of a V-shape without sharp highs. Of course you can decide for yourself how much emphasis you want to place on the high and low, but it has been proven by JBL (Harman Group) that the V-curve is experienced by most people as very pleasant and that is why many companies use it.

Because of this slight curve, I notice that all the songs I listen to, during sports or during a bike ride, all seem to have a little more power. Take Evanescence’s Bring Me To Life for example , it is a busy song with the beautiful vocals of Amy Lee and an epic drumming by Rocky Gray. Thanks to the Soundform TW’s EQ, it sounds that way too, epic.

The highs are never sharp or too much and the low sounds absolutely not bloated, but just tight and deep. I can already hear people thinking, what if I want to use them in the office with some quieter music? Doesn’t it sound very unnatural and boring? On the contrary, a good example of a quiet song where a lot has happened is Nose On The Grindstone by Tyler Childers . This song was recorded in collaboration with OurVinyl at the time and consists only of Tyler, his guitar and a large room with some carpets on the floor. What immediately struck me was the extra bit of refinement and detail you hear in the shape of the guitar and the greatness and depth of Tyler’s voice, which makes for a very pleasant but also relaxing reproduction.

What also quickly comes to the fore with this song is the little lack of soundstage, so everything sounds a bit closer together and you do not have the far extension to the left or right or the precise placement of instruments, which you quickly encounter with more expensive rivals. Still, I have to say that the soundstage is fine for this price range. You hear clear differences between instruments and sounds on the left, right and everything in between, everything sounds nice and deep and even if something moves from left to right, I do not experience this as below par but just as fine. You can actually describe Belkin Soundform True Wireless with those three words, ‘very good!’

Belkin’s Soundform True Wireless brings a lot for little without skimping on the basics. You could of course say that functions such as ANC (Active Noise Canceling) are missing, but you should not forget the price of this beautiful set of earbuds. If you  are looking for a set of wireless earphones under 100 euros, you should definitely consider this one.