This year, after a long hiatus, Pioneer was showcased at CES in Las Vegas. Three new AV receivers with HDMI 2.1 and 8K have been announced: Pioneer VSX-LX150 (in Europe likely to be called Pioneer VSX-935), VSX ‑ LX305 and VSX ‑ LX505. Outside of Europe, new items will be positioned within the renewed Elite series, well-known to owners of Pioneer equipment of past generations.

The specs are broadly similar to Onkyo’s 2021 AV receivers . At the moment, it is known that the junior device has received a 7-channel amplifier and a maximum configuration of 5.2.2, while the other two models offer 9 channels and a maximum of 7.2.2. The power output is known: 80W for the Pioneer VSX-935 (-LX150), 100W for the VSX-LX305 and 120W per channel for the Pioneer VSX-LX505. It goes without saying that there is support for Dolby Atmos and DTS: X 3D sound formats. Audio Zone 2 is available on all models.

Pioneer’s 2021 AV Receivers are ready for powerful gaming PCs or PS5 and Xbox Series X game consoles. HDMI 2.1 (based on chips from Nuvoton Technology) provides 4K video support at 120Hz, 8K at 60Hz and a range of gaming features such as VRR (Variable Refresh Rate) or ALLM (Automatic Low Latency Mode). As for the number of ports, the Pioneer VSX-935 has three inputs and two HDMI 2.1 certified outputs with HDCP 2.3, while the other three HDMI inputs correspond to version 2.0b. On the Pioneer Elite VSX-LX305 and VSX-LX505, all seven HDMI inputs (six rear + one front) and two outputs are HDMI 2.1 compliant with HDCP 2.3 support. All three new Pioneer home theater receivers support HDR10, HLG (Hybrid Log-Gamma), Dolby Vision and HDR10 +.

Networking capabilities include Apple’s AirPlay 2 and Chromecast streaming protocols. Two-way Bluetooth not only allows you to stream music from your smartphone, but also listen through Bluetooth headphones. The new items also work with voice assistants Google Assistant and Amazon Alexa, are certified Works with Sonos and support DTS Play-Fi multi-room technology for wireless audio transmission .

Luxman D-380 Review: Reference CD player you should have

Luxman P-750u Review: Will appeal to any audiophile 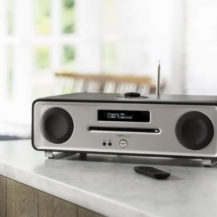 NAD M33 Review: All you need in one package