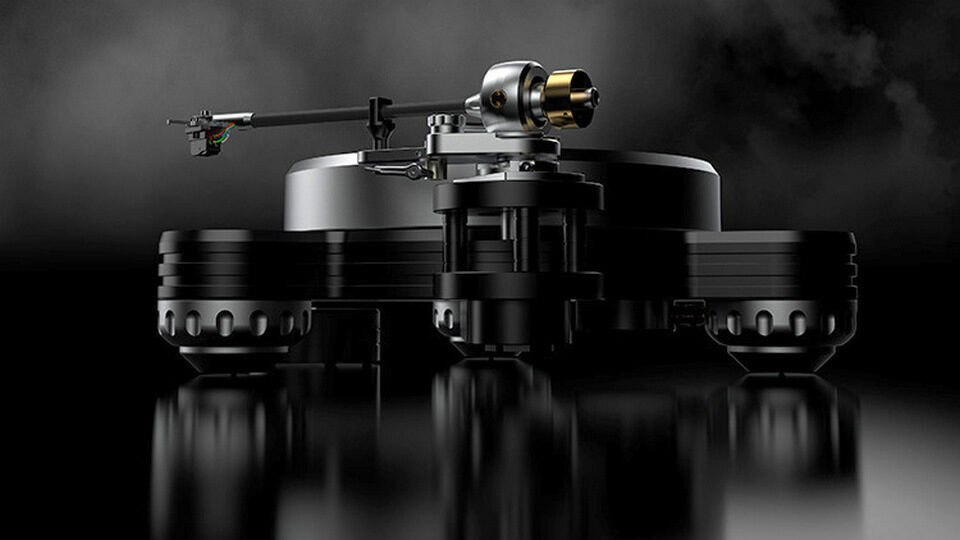 In Acoustic Signature’s Neo turntable series, the Tornado is the youngest of three. The names of the other two are also from the field of meteorology: Hurricane and Typhoon.

The Tornado Neo Chassis is a 43mm thick shaped aluminum slab mounted on three adjustable gel-damped mounts. A disk made of monolithic aluminum almost 5 cm thick is equipped with four “absorbers” – brass damping elements located at the tops of the square. Under the disc is a proprietary Dura Turn Diamond bearing with sub disc and fully insulated AC motor.

The Tornado Neo engine is equipped with a double belt drive. This 24-pole, synchronous, two-coil AC system is driven by respectively two separate, stabilized sinusoidal signals, which are out of phase by 90 degrees. They are formed by the digital motor controller DMC-10. Such an algorithm, according to Acoustic Signature, ensures the accuracy of maintaining speed, smoothness and silence (absence of vibration) of rotation.

The system is controlled by two buttons and two LEDs on the cylindrical console. One button starts or stops rotation, the other allows you to select the speed. During speed stabilization, the LED flashes, red corresponds to 33.3 rpm, and green corresponds to 45 rpm.

The TA-2000 Neo 9 tonearm is 9 inches long and comes with everything you need for installation and setup. Adjustments include overhang, offset angle, VTA/SRA, and anti-skating. Azimuth adjustment is not documented, but is also possible. Moreover, 3 tonearms can be installed simultaneously on Tornado Neo. The turntable can initially be equipped not only with the TA-2000, but also with the TA-1000 arm, both available in 9- or 12-inch versions. The turntable is available in black or silver or a combination of the two.