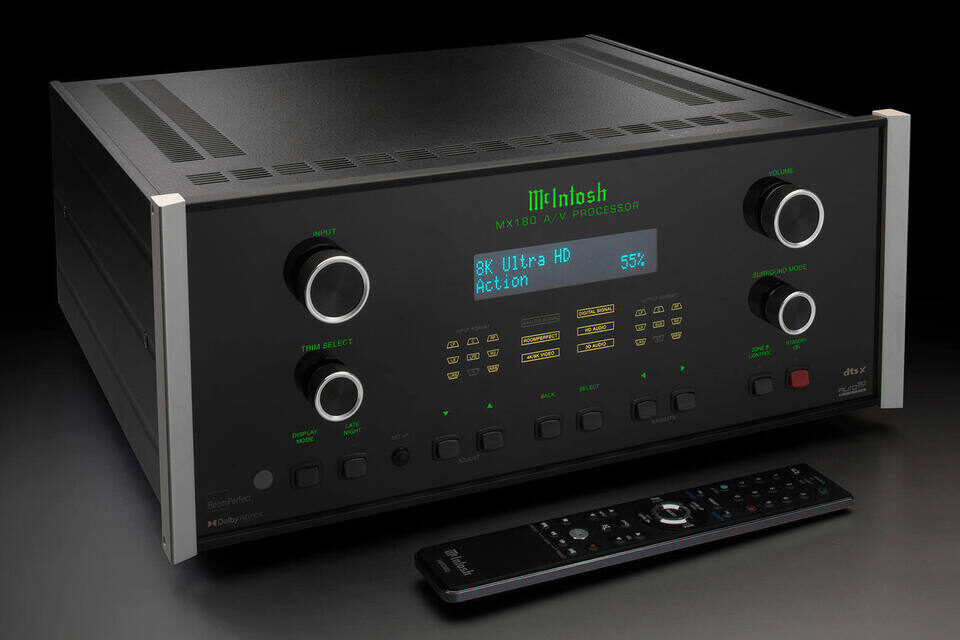 McIntosh introduced the MX180 audio/video processor, which combines what it says are “the latest technological advances with a simplified setup program.” Video-wise, it’s compatible with 8K/60Hz or 4K/120Hz on all of its seven HDMI ports (five inputs and two outputs) – and each supports HDCP 2.3, 4:4:4 Color, Rec. 2020, dynamic lip sync and 3D video transmission.

On two HDMI outputs, the device will be able to output both the same image from one of the inputs, and two different ones – from two inputs to choose from. At the same time, one of the HDMI outputs supports ARC in normal and extended versions.

The McIntosh MX180 based audio system can be configured up to 15.1 or 9.1.6 with 16 balanced XLR audio outputs. The system works with 3D surround sound including Dolby Atmos, DTS:X Pro as well as Auro-3D.

Among the many digital and analog inputs and outputs on the rear panel of the MX180, there was even a place for a moving magnet phono input. The MX180 was equipped with RoomPerfect room correction technology. There is also a two-channel Zone B output, and if you need the simplest sound adjustments, there are bass and treble controls.

It’s all wrapped up in McIntosh’s signature design, with a black glass front panel, familiar control knobs, an illuminated logo, and heavy-duty aluminum plates on the sides of the case. The release of new items in the US and Canada is promised in February 2022 – then the geography of deliveries of the MX180 will expand.