The McIntosh MVP901 Audio & Video Player is a versatile source that delivers the highest quality Blu-ray disc picture and soundtrack sound, as well as superior support for virtually all digital media and formats.

The McIntosh MVP901 can play almost any optical disc: Blu-ray, DVD, CD, SACD in their various modifications. The “User’s Guide” even mentions HD DVDs for those, probably, who managed to acquire them.

It is omnivorous in relation to the recording formats on these media: CDs and Data Audio discs with files in MP3, WMA, AAC, FLAC, ALAC, AIFF, LPCM and DSD are supported, including Hi-Res-audio up to 24 bit / 192 kHz and up to DSD128. It will also display a photo in JPEG on the screen.

The McIntosh MVP901 does not read 4K-UHD-Blu-ray discs, but is capable of upscaling to that standard in any compatible format.

The player has balanced XLR and unbalanced RCA stereo outputs to output analog signals. Built-in Dolby TrueHD and DTS-FID Master Audio decoders let you mix soundtracks for the best movie soundtrack from a bunk of speakers.

To provide multi-channel audio with the MVP901, you must use an AV processor (such as a McIntosh MX122 or MX160) that connects to its optical, coaxial, or HDMI outputs.

The player can read and skip 3D audio formats such as Dolby Atmos, DTS: X and Auro-3D for further processing.

The McIntosh MVP901 can also receive audio and video content over the local network – the connector is located on the rear panel.

Finally, it has three Type A USB ports – one on the front panel. Adjustment and setting of parameters are performed using the menu, which can be displayed on the screen of the connected TV or projector. A number of important functions, such as the choice of video resolution, are accessible from the remote control or via a button on the front panel.

Technics SC-C70 MK2 Review: This one is just awesome! 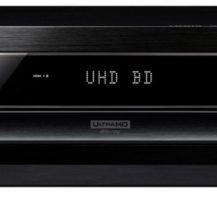