In gaming laptops, as a rule, they rely on productive hardware, sacrificing device size. However, ASUS engineers managed to find a compromise and build a chassis that makes a 16 “laptop match the size of many 15” models. Compared to last year’s Zephyrus M15 , the M16 chassis is down 5%. The bezels around the screen are only 4.6 mm thick, which means that the display occupies 94% of the front panel area. 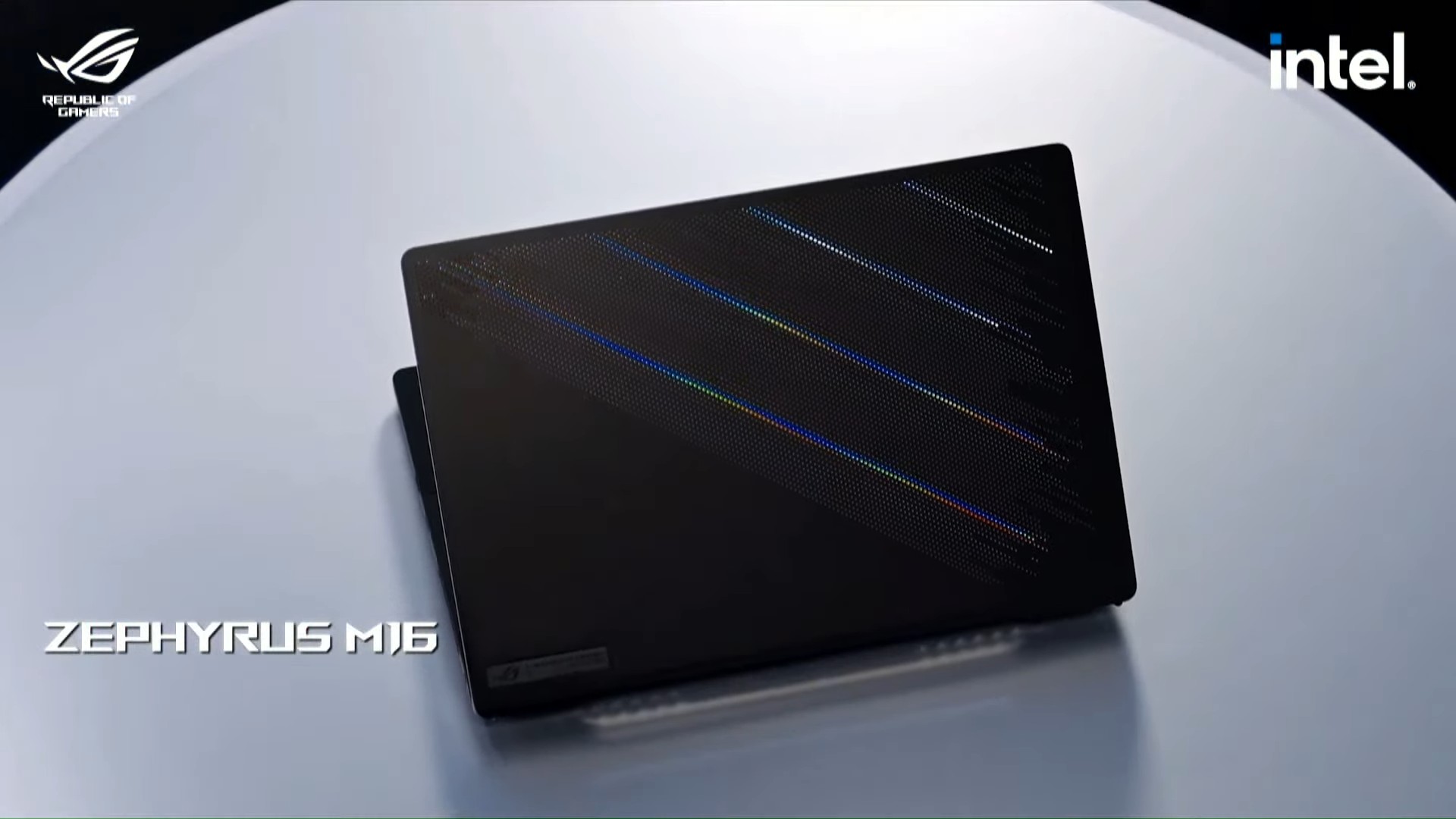 The screen itself, by the way, has a 16:10 aspect ratio, providing a little more room for various toolbars and menus. The laptop has an IPS panel with a resolution of 2560×1600 pixels, a refresh rate of 165 Hz and a response time of 3 ms. The display has 100% DCI-P3 color space coverage, Pantone certification, Adaptive-Sync and Dolby Vision support. The screen brightness is 500 nits, which means the device will be comfortable to use even outdoors.

The top configuration of the Zephyrus M16 includes an Intel Core i9-11900H processor (8 cores / 16 threads, up to 4.9 GHz). It is capable of operating at a constant power of up to 45W with an active GPU and up to 80W on its own. The company is a video adapter NVIDIA GeForce RTX 3070. An efficient cooling system (using liquid metal, six heat pipes and two Arc Flow fans) allows the GPU to operate at a clock speed of up to 1390 MHz at 80 watts of power with ROG Boost. DDR4-3200 RAM can be installed up to 48 GB. And the PCIe 4.0 SSD storage capacity is up to 2TB. At the same time, another SSD slot is available for the possibility of an upgrade.

Despite this powerful iron, the Zephyrus M16 is only 19.9mm thick and weighs 1.9kg. The laptop has a 90 W * h battery, which should be enough for about 10 hours of video playback. Supports fast charging – 30 minutes is enough to replenish 50% of the charge. There is also the possibility of charging via the USB-C port. Six speakers with support for Dolby Atmos technology are responsible for sound reproduction in the device. The keyboard has single-zone RGB backlighting and 1.7mm key travel. The fingerprint scanner is built into the power button. Thunderbolt 4 (DP1.4, PD 3.0), USB-C 3.2 Gen 2 (DP1.4, PD 3.0), USB-A 3.2 Gen 2, USB-A 3.2 Gen 1, microSD reader, HDMI 2.0 are available from the connection interfaces b, RJ45, 3.5mm audio jack. There are also Wi-Fi 6 and Bluetooth 5.2 modules.

The older Zephyrus offers users a couple of additional benefits. First of all, it’s worth noting that the S17 is equipped with an opto-mechanical keyboard that rises 5 degrees to provide a more comfortable hand angle as well as better airflow for the cooling system. In addition, buyers can choose to be configured with graphics cards up to the RTX 3080.

The Zephyrus S17, like the M16, uses liquid metal in its cooling system (reduces the CPU temperature by 10 degrees compared to thermal grease). Six heatpipes are provided and Arc Flow fans draw in 25% more air thanks to the aforementioned design that lifts the keyboard. 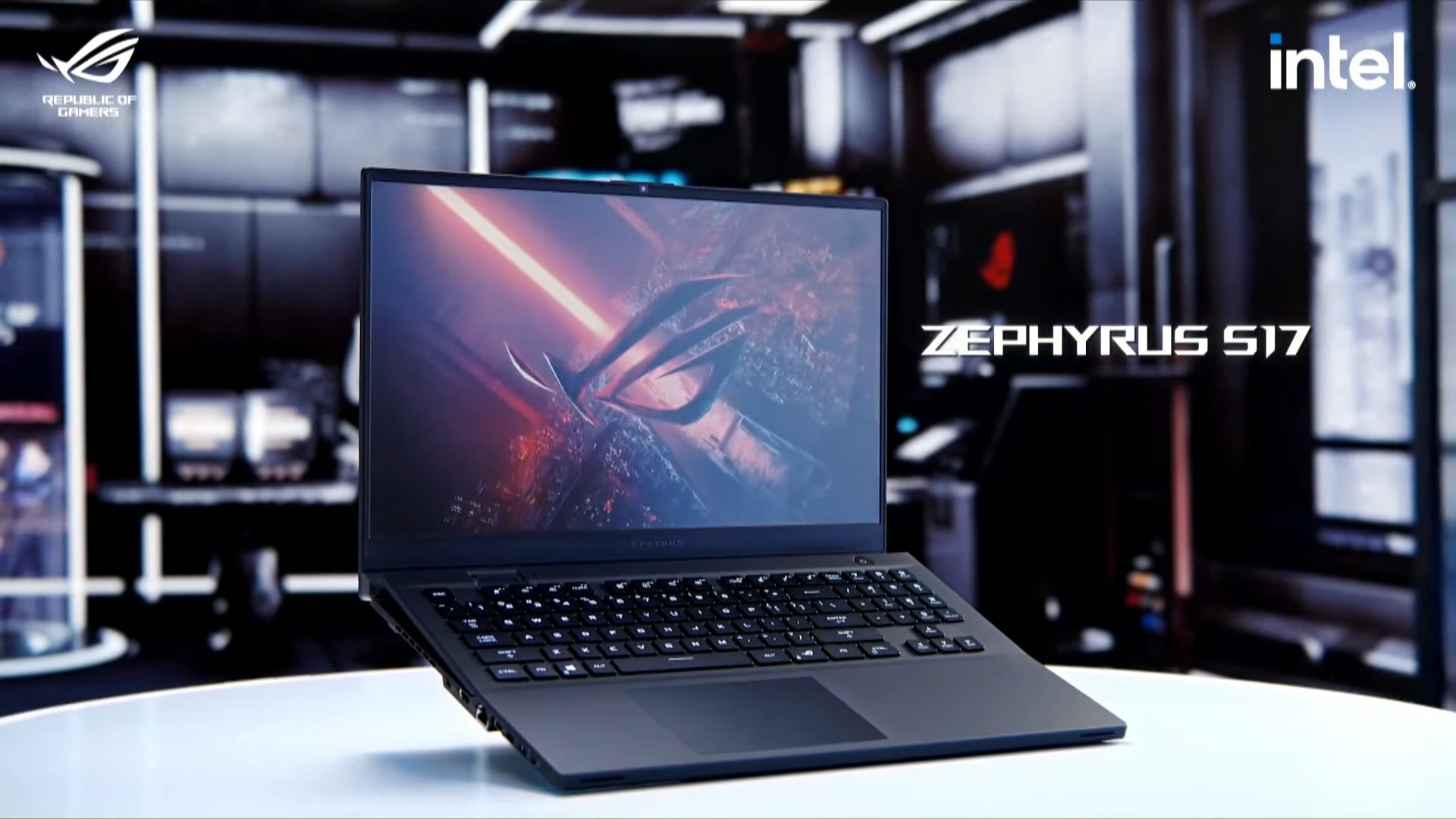 ASUS claims the Zephyrus S17 has “the best speakers in a gaming laptop.” A total of six components are available: two tweeters and two dual woofers, providing users with deep bass. The laptop also features a set of noise canceling microphones to keep your voice clear during online battles. The built-in battery has a capacity of 90 W * h, fast charging (50% in 30 minutes) and charging via USB-C are supported. The optical-mechanical keyboard has a separate backlight for each key. The resource of the switches is up to 100 million clicks. Key travel – 1.9 mm. There is also a multi-wheel above the keyboard that provides access to various functions. As for the available connection interfaces, Thunderbolt 4 (DP1.4, PD 3.0), USB-C 3.2 Gen 2 (DP1.4, PD 3.0), USB-A 3.2 Gen 2, two USB-A 3 are available.