The Sony Xperia 1 II (pronounced Mark II) is the latest high-end smartphone from the Japanese company, which puts emphasis on the cameras. Does this leave a good smartphone experience? We take a look at it in our comprehensive review. The device has a suggested retail price of 1199 euros.

It’s no secret that Sony’s smartphones are begging for success. Although the phones often look sleek, have clean software and are equipped with beautiful OLED screens, Sony is unable to connect people to them. Why is that? That could be different things. The company has previously acknowledged that the long development period of new smartphones is at the root of this. And the fact that Sony can’t keep up with modern trends fast enough doesn’t help either. But is the latter a requirement?

Make your own plan

As a manufacturer you can of course also just draw your own plan. And it looks like Sony is finally doing that with the Sony Xperia 1 II. Basically it is a modern smartphone as you can expect it. Under the hood we come across a super-fast Qualcomm Snapdragon 865 processor, accompanied by 8 GB of RAM and a whopping 256 GB of internal storage. If that is not enough, you can also put a micro SD card in the shared SIM card slot. There are also two stereo speakers in the front. 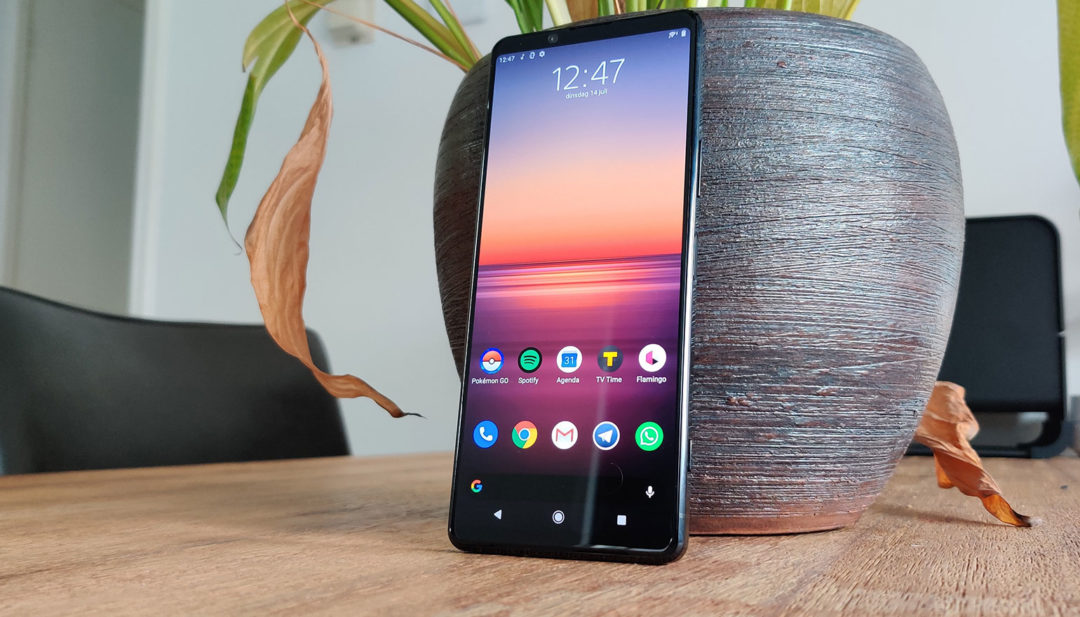 The fantastic OLED screen has a size of 6.5 inches and a resolution of 1644 by 3840 pixels. This deviating number of pixels is due to the fact that the device has a narrow and high design. Those specifications deliver a pixel density of 643 pixels per inch, which is a very high level. This means that details are clearly visible. There is support for HDR content and there is a refresh rate of 90 Hz. That may not be as high as on the recent OnePlus smartphones, but it is very nice to see.

One part that often plagues Sony phones is the battery, for example. In the previous model there was one with a capacity of 3300 mAh, but this time there is one with 4000 mAh. That is a lot of progress and one that ensures that you are sure to get through the day. And, depending on use, maybe longer. Android is and remains energy-efficient software. And with Android 10 on board, that’s no different. Sony also supplies a virtually non-modified version of Android, with extra apps and adjustments here and there. We have to talk about the side sense

For example, there is the side sensor. If you tap on it, you get access to frequently used apps. However, in practice that sensor just doesn’t work properly. You can tap and tap whatever you want, but those apps will not appear. Another addition is the ability to shrink the screen for one-handed operation. The entire interface is rendered compact, so that you can reach everything with just your thumb. Such a large screen is great for the content (reading, gaming, watching a film), but it can sometimes be inconvenient for operation.

A striking element of the Sony Xperia 1 II is the fingerprint scanner on the side. The Sony Xperia 1 II is one of the most sleek and business-like smartphones we’ve ever seen, so we understand that Sony is looking for neat solutions for parts that users expect on their smartphone. And although the place is in principle fine (if you hold your smartphone with the right, your thumb falls on it perfectly), we still notice that the scanner is not always accurate. Sometimes you have to reposition your thumb a few times. Most importantly: the camera

The most important part of the Sony Xperia 1 II experience is without a doubt the camera module on the back. That excellent element has four sensors on board. There are three lenses that have twelve megapixels: a telephoto lens, wide-angle lens and ultra-wide-angle lens. The telephoto lens has optical image stabilization and three times optical zoom. The fourth sensor is a time of flight variant, with which you can measure depth. That sensor has 0.3 megapixels and is used for augmented reality and, for example, the bokeh effect.

Of course, the specs of such a camera module only tell a small part of the story. The most important thing is: what can you do with it? This is the part where Sony can show what it has to offer – where it can therefore make its own plan. The team behind the smartphones worked together with the team behind the mirrorless cameras from Sony, mainly the A9 series. The main theme is speed and the camera is optimized for that. That is why we see, for example, that there is a 12 and not a 100+ megapixel main camera. 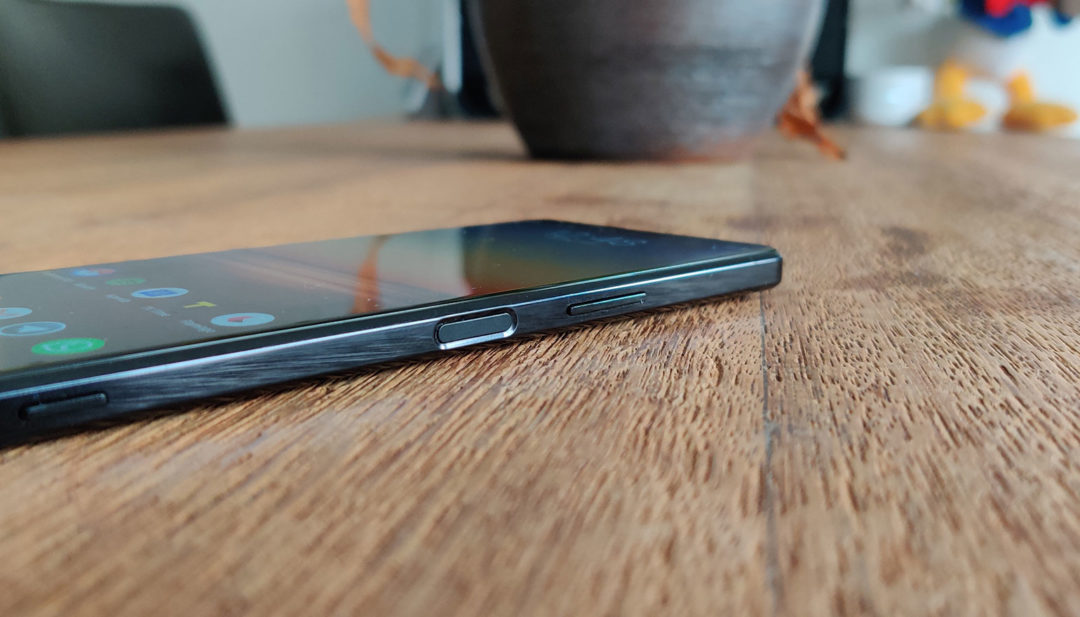 This time we get access to no less than three different apps for the extensive and fast camera module. Just like on the previous model, you get the regular Camera and Cinema Pro app. The latter app is intended for video, although of course you also shoot videos with the regular app. This time you also get the Photo Pro app as a counterpart to Cinema Pro. That application should bring the better parts of the mirrorless cameras to the smartphone. It’s a comprehensive photo taking app, so.

Where normal camera apps offer a manual mode, the camera app on the Sony Xperia 1 II does not. So you have the Photo Pro for that. If you are familiar with the Sony cameras, you will feel right at home. While the interface may feel a bit cluttered, there are plenty of options for taking good photos. One drawback is that there is no digital button for taking pictures. You do that with the physical buttons on top, but then you have a chance that you move your device while shooting.

Quality of the photos

We can be brief about that: wow. This is probably the best photo quality we’ve come across on a smartphone to date. The device captures details very quickly and very finely. The colors are also nicely balanced. Nowhere do we have the idea that colors are saturated or pale. You can of course partly control this yourself when you use the extensive Photo Pro app. But if you want to take quick snapshots with the standard camera app, then you have nothing to complain about. The photography team has done a great job here.

Photos taken in normal daylight sometimes leave you speechless. You get that feeling when you look back on your smartphone screen, but also when you see them on a screen. The quality is second to none. The colors come out very well, the image is sharp, clear and nowhere artificially processed, the dynamic range is quite wide and everything just comes together very nicely on the image. You can fix a lot yourself with the camera apps, but the default settings also do a great job. The quality does not deteriorate when you use the wide-angle lenses. The evening mode does not disappoint either. It takes a bit longer to take pictures, but the quality is just fine. Unfortunately, that mode is not automatically activated, so you don’t use it much when you forget to activate it. The selfie camera in the front also shoots beautiful pictures very quickly that are clear, sharp and colorful. It doesn’t look unnatural at all and that goes for the general camera experience. Very important to us.

When we look at the video quality, we can’t help but reach the same conclusion. Videos shot in 4k (beware: your device can get very hot) look incredibly sharp and colorful. Moreover, the device also captures a lot of details. Unfortunately, it is not always pleasant to watch the videos on the Sony Xperia 1 II. And that has to do with the small speakers. They are too small and simply have too little space for a nice sound. However, it is not a problem for simple YouTube videos or audio messages.

We make no bones about it. The Sony Xperia 1 II is a sleek, business device with a fantastic camera. The experience of the various camera apps may leave something to be desired, but fortunately that does not stand in the way of taking eye-pleasing photos. Furthermore, the software is very nice, but there are small things that irritate or do not work properly. We realize that the large screen is not for everyone, but it is indisputable that you can multitask and watch movies on it.

The biggest disadvantage of the Sony Xperia 1 II is not so much that the phone is not that exciting. The stock Android experience offers few reasons to choose Sony, unless of course stock Android is exactly what you want (a big plus for us). What the phone mainly opposes is the high price of almost 1200 euros. Despite the enormously good camera quality, there are just too many small irritations to justify the purchase for that amount. But it is beyond doubt that this is the best camera phone.