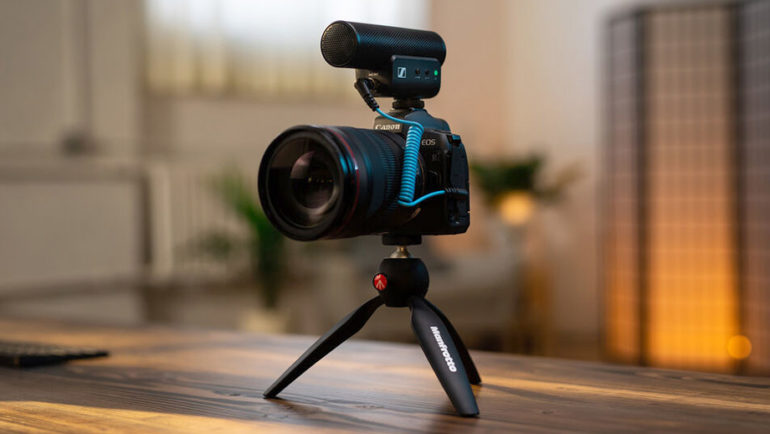 The announcements of cameras and lenses have died down, and it is time to present their products to manufacturers of various accessories. Only yesterday news came about a microphone from the Australian company RØDE, and today the well-known manufacturer of audio equipment Sennheiser , which for some reason is not such a frequent guest of our news feed , has become active . Today’s reason to remember this German company is the release of a new advanced version of the MKE 400 on-camera microphone , which was specially designed for bloggers, videographers and mobile journalists. The form factor of the Sennheiser MKE 400 is very similar to the MKE 200 launched by the company in the fall of 2020, but the new product has a number of additional features: the MKE 400 is equipped with a headphone output with volume control, an internal shock absorber, a built-in windscreen and an auto on / off function. In online stores, the microphone will be called (2nd Generation), that is, a new version, since this is essentially an updated model of the MKE 400, which was released by the company in 2008.

The MKE 400 has a supercardioid pick-up pattern, so the microphone will be good at picking up sound only from the direction the camera is facing and suppressing background noise on the sides of it. A shock-absorbing capsule minimizes operating noise, and a pop filter is located inside the housing. For work in the open air, the kit includes a furry windscreen, which, for ethical reasons, is now called in this way, in every possible way avoiding the use of a mention of the feline family in its name.

The microphone is equipped with a three-stage sensitivity control, there is also a low-pass filter. The headphone output is equipped with an 8-step digital volume control, you can connect any headphone with a 3.5mm jack and check the sound level and quality while recording. The MKE 400 comes with 3.5mm TRS cables for cameras and TRRS cables for smartphones. The microphone is mounted on a “cold shoe”, there is also a 1/4 “-20 thread, so it can be installed not only on the camera, but also on a tripod, on a stabilizer, on any rig or pantograph, stand, and generally anywhere, depending on features of the setup. Camera with microphone on a Manfrotto mini tripod

The microphone is powered by two AAA batteries or rechargeable batteries of the same form factor. The company says the microphone can last up to 100 hours on fresh batteries. Three hours before the batteries run out, the low battery indicator will turn on. From practice, we can say that three hours is quite a lot, since when you see such an indicator, you lose your vigilance, because there is still a lot of time left, and you just forget about replacing batteries or accumulators. It is much better to have a bright red signal – “ watch, change the batteries, or I’ll turn off! “And then already have some time to calmly complete the take and solve the problem.

Apparently, German engineers carefully collected user reviews, thought carefully about ergonomics and created a truly convenient microphone that will be pleasant and comfortable to use. Bravo Sennheiser! The joy of the author of these lines is due to the constant solution of similar problems with many (read Chinese) devices, and of course there is a desire to finally try Sennheiser technology.

Sennheiser MKE 400 is already available for order for $ 200, there is also a “mobile” kit, which also includes a proprietary Sennheiser smartphone bracket and a Manfrotto PIXI mini tripod, which will cost only $ 30 more – it costs $ 230.