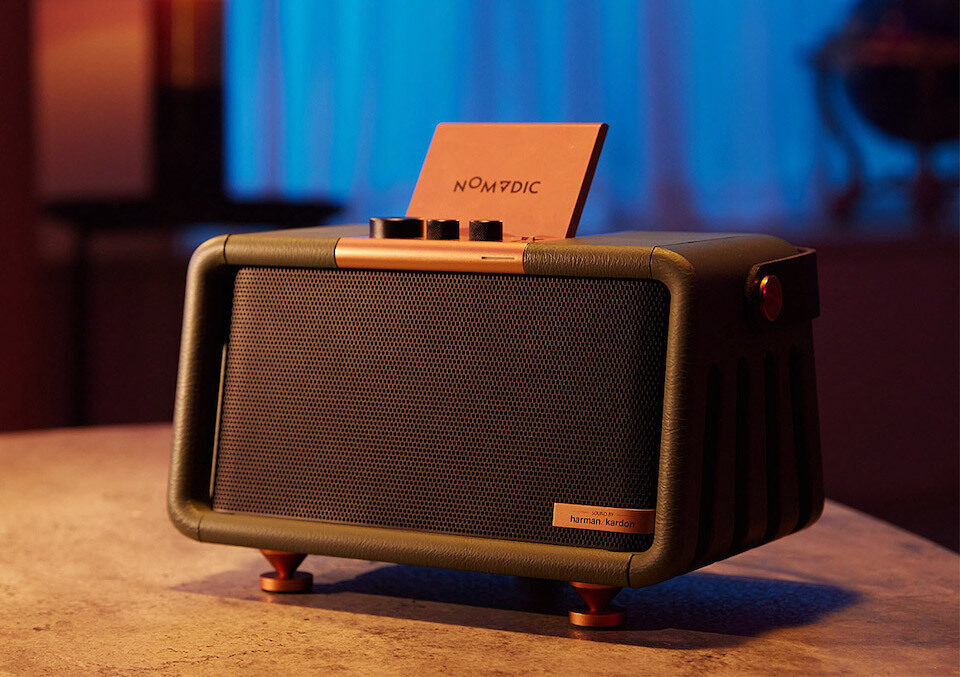 The world has already seen quite a few attempts to make an optimal portable projector that allows you to organize spontaneous viewing of films, clips and concerts in unprepared conditions. All of them were not very successful due to the traditional view of projectors in general: they required screens, powerful audio systems and, in principle, turned out to be too specialized. California-based startup Nomvdic has come up with a concept that seems to give the optimal configuration for such devices.

Their X300 projector is essentially a portable Bluetooth speaker that looks like a miniature old radio that weighs about 2.8kg and measures 276 x 165 x 157mm. Acoustics and amplifying part for it was developed by Harman Kardon. And the projector in it is located in the middle with the lens up. It is protected from dust by a special cover with a mirror, which can redirect the image to the wall or screen, if one is found. More projection surfaces can be used this way, including the ceiling, which is far more likely to be white and flat than walls.

The projector uses a 1-chip DLP circuit with diodes as the light source. Resolution – Full HD, that is, 1920 x 1080 pixels. Nothing is said about the new video formats, but Nomvdic promises that the color gamut will be 25% larger than the Rec.709 standard, which means potential support for HDR. The promised contrast ratio is 3,000,000:1, which is clearly achieved through dynamic diode control. But the brightness for a portable projector is traditionally low – only about 350 ANSI-lm, which is due not so much to the size of the device as to its battery power.

Nomvdic claims that this is enough to create a 100-inch image, but rather, such a diagonal is the maximum that can be obtained in full blackout conditions. The battery capacity of 10,000 mAh is enough for watching up to 3 hours of video without recharging, but if the device is used only as a speaker, listeners can expect about 6 hours of listening to music. And it should potentially sound good: the audio system in the X300 is stereo with two tweeters and two woofers, with an amplifier with a total power of 30 watts.

Nothing is said about the presence of an operating system in the device, but due to the fact that it is supposed to use sticks connected to the HDMI input to view streaming video services, it can be assumed that Android will not be on board. Nevertheless, the device should play files from microSD cards, USB flash drives and disks. In addition, it can “mirror” video when connecting smartphones via USB-C cable and Wi-Fi. And through Bluetooth 4.2, it can not only play music from smartphones, but also transmit audio to headphones when playing videos.

The X300 is expected to be priced around $900 when the first copies of the device go on sale in September of this year – the projector is now available on IndieGoGo for $799.