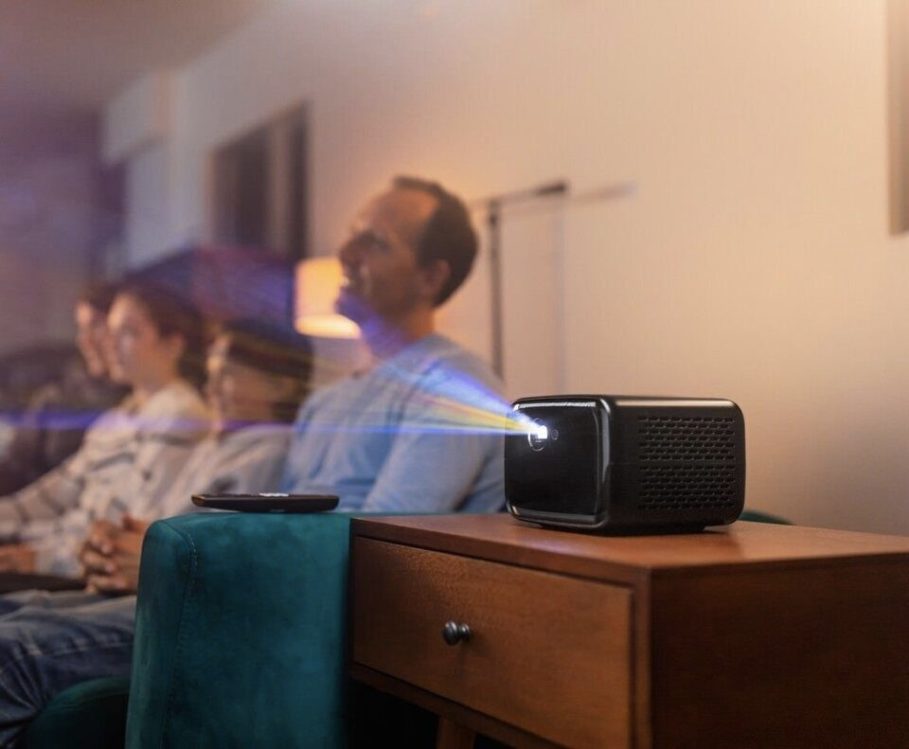 Philips just recently launched portable LED projectors – and needs to make unusual models to stand out from the competition. Two of last year’s devices cannot be called such, but this year Philips changed tactics and introduced two completely different projectors.

The first one was called PicoPix MaxTV, alluding to the capabilities of a typical modern TV, but without a tuner. It runs Android TV, which means access to streaming video services and a choice of multiple players to play media content directly from USB sticks. The latter is necessary for him, because it is primarily a mobile projector.

It has a large 21,000mAh battery that lasts about 4 hours of video playback, a built-in audio system with two speakers on the sides and a large oval woofer in the back, and lens protection with a sliding shutter. The luminous flux is not specified , but specialized sites say that it was about 900 lumens.

The developers were able to achieve such values ​​due to the so-called 4-channel scheme (RGGB) in the light source, that is, the use of two assemblies of green LEDs instead of one, since they give the greatest real increase in brightness.

As a basis for this model, they took a Full HD pico-size chip from TI. At the same time, the playback capabilities are not limited only to material with a standard range – the projector can also display HDR video, although its color gamut only covers the Rec.709 standard. The Philips PicoPix MaxTV weighs 2 kg and costs about $ 900.

The second projector, called Philips GoPix 1, can really be called a pocket projector. Unlike last year’s model, it is only 18 mm thick and weighs 245 g. At the same time, it has no OS or wireless connection. The projector is focused primarily on working with smartphones, to which it can be connected via USB-C.

But the HDMI input was also left just in case. There is no information about the luminous flux, but it is so clear that it will not be large. The resolution is 854×480 pixels. The power of the built-in audio system is 3 W. But the price is appropriate – about $ 300.