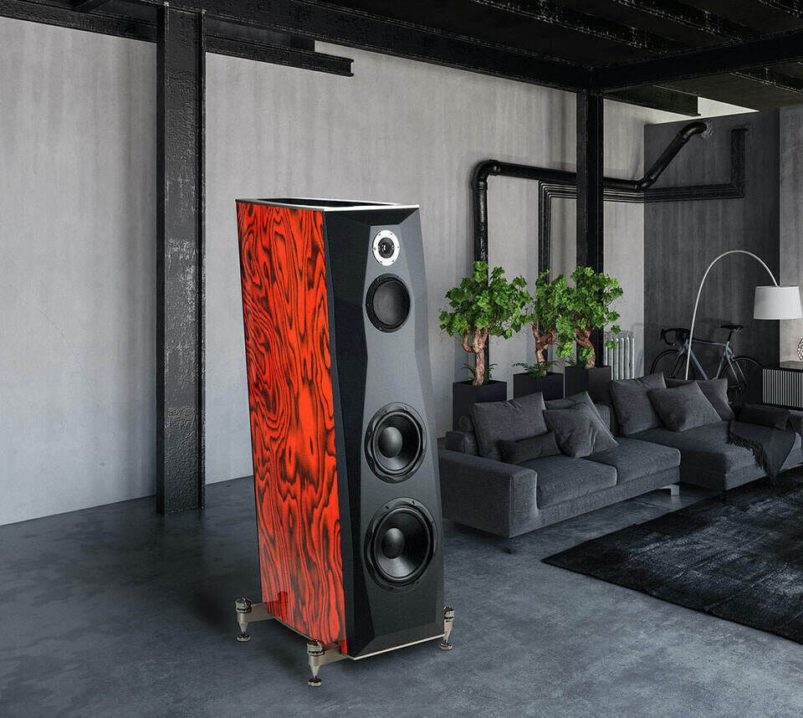 The full-size Alare Remiga 2 floor standing speakers from the Italian brand Alare, founded by the engineers of Audia Flight, debuted at the Hong Kong High End Audio Visual Show 2021. Despite the ‘2’ index, these speakers are the first Alare model available on the market.

According to the developers, they wanted to create acoustics suitable for the Audia Flight technique, and ten years ago they even assembled reference speakers that are still used in the laboratory. And two years ago they decided to enter the high-end acoustics market and founded a separate company – Alare.

The Remiga 2 120kg speaker set consists of a pair of custom woofers with 10 “and 8” carbon sandwich cones. The 7-inch German Accuton Cell midrange with a ceramic diffuser is housed in a separate volume filled with special aramid fiber wool.

At the top of the bezel, close to the midrange, is a 1.2-inch diamond tweeter with a thin diamond-shaped, concave diaphragm. This speaker, also from Accuton, was modestly called “a true technical masterpiece” by Alare.

The acoustics received a body made of sandwich panels using various types of wood. The wood layers are interspersed with synthetic damping material, creating a “bounded layer” effect. According to the manufacturer, the 135 cm high case can be considered acoustically inert. Mounting the Remiga 2 crossover – hinged. The connections are made with silver plated copper wire.

As a result, the frequency range of the Remiga 2 extends from 32 Hz to 30 kHz with a declared flatness of 0 to -3 dB. The speakers received a cantilever metal base with support points outside the dimensions of the case. Replaceable metal feet can be replaced with complete spikes. The six finishes include several types of natural wood veneer and traditional white and black piano lacquer.