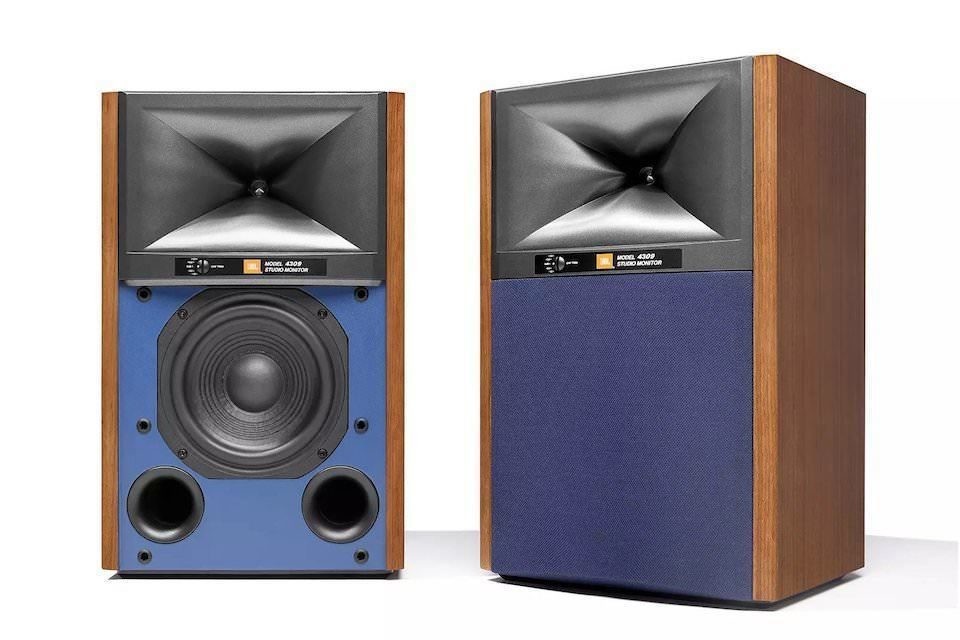 The JBL 4309 monitors can be considered a more compact version of the 4349 model : the same design, the same ideology and even the same sound character promise the same in almost half the size. With a height of 74 cm, it is hardly possible to call the JBL 4349 shelf units, and the 42-cm JBL 4309 is easy.

Naturally, the older model’s 12-inch driver has been replaced by a 6.5-inch mid-tweeter with a cellulose pulp diaphragm. The 2410H-2 ring high-frequency driver (for the JBL 4349 model it is the D2415K) received a similar Teonex diaphragm with an improved HDI geometry horn.

The blue bezel is dedicated to the brand’s 75th anniversary this year. A pair of bass reflexes are located in the lower corners of the front panel. Above the front panel there is a tweeter level control.

The JBL 4309 crossover is assembled on coreless coils, wirewound resistors and metallized low impedance film capacitors. The maximum power of the novelty is 150 W (in the older model it is 200 W), and the lower frequency limit with an unevenness of -6 dB reached 42 Hz – 10 Hz higher.

The novelty has received a fabric grill that protects the lower part of the front panel so that the tweeter horn remains open. The body will be available in two finishes: walnut or black. The JBL 4309 monitors have already received the Red Dot from the Red Dot Design Award.

Advertisement
X
Subscribe to get the best Tech news and reviews of the week.
By signing up, you agree to our Privacy Notice and European users agree to the data transfer policy.
Close
04/14/2021