Looking for a new speaker can have many variants depending on the type of use that you want to give it, since the concept of portability is increasingly relevant for users, but also a small team can fall short when it comes to music parties or large meetings . In the latter case, classic models like LG XBOOM ON2DN are still popular.

LG ON2DN is a mid-range loudspeaker that targets a traditional home stereo concept , both in its overall design and in its dimensions and modes of use. However, its 300W of power should be sufficient for the demands of most and its ability to incorporate a microphone adds more possibilities to entertain friends and family.

As can be seen in the images, this equipment is designed with a typical rectangular format that is completely dyed black and only has a striking red circle on the front audio output. On its upper face is where all the physical buttons are located, although logically with your purchase a remote control is also included to perform actions from a distance.

The official dimensions of LG XBOOM ON2D correspond to 300 mm x 324 mm x 390 mm and its total weight is 6.8 kilograms , that is, a fairly robust model by current market standards and that make it clear that it is not about a loudspeaker designed to be carried on a regular basis. There is also no built-in battery, so it will always be necessary to have a power input on hand.

It is worth noting that the button distribution is located on two front circular panels, as well as its physical ports that range from two USB inputs for playing audio files stored on external drives , a classic 3.5 mm auxiliary input and another microphone input. 6.5 mm. Nor does it lack an HDMI port for its complementation with multimedia players.

Nor can you leave out a small but useful detail that corresponds to a slot to fix the Smartphone there without risking it falling during a party , in addition to making it easier for the user in charge of the playlist not to have to stay by the side. on the speaker overnight when using a Bluetooth connection. 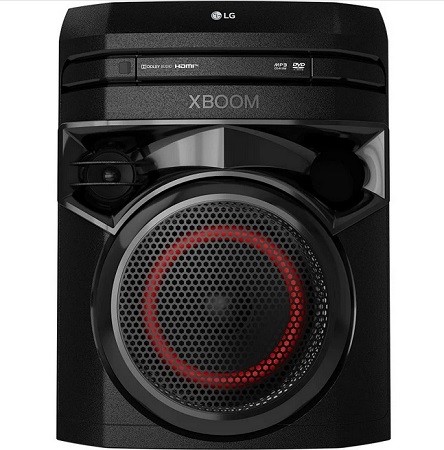 LG XBOOM ON2D is enough for celebrations at home

As indicated above, this model does not have many peculiarities at the level of advanced sound technologies, but it complies in the field of power through a distribution of three integrated speakers that reach a total of 300W.

In addition, the so-called “Super Bass Boost” system allows for powerful sound that everyone will hear even when they are not near the equipment, as its intelligent design offers extra airflow behind the speaker unit to produce powerful bass.

As for its karaoke function, not only the aforementioned microphone input is offered but also a vocal sound control mode that optimizes the volume of the music and the microphone independently . It is even possible to use two microphones to perform duets and increase group fun (it is worth noting that they are not included with the purchase of the speaker).

Finally, there is no lack of compatibility with classic modes of use such as the FM radio tuner and CD player , as well as Bluetooth wireless connectivity that includes up to three devices synchronized simultaneously to share control of the playlist without interrupt the music in no time. LG’s XBOOM line has models for all tastes and needs, as we have previously highlighted devices of the caliber of LG XBOOM Go PL7 that target diametrically opposite users. And it is that it is a compact speaker that fits in the hand to be transported and facilitates a cable-free use with battery for up to 24 hours of use.

Of course, the advantage it has in portability is impaired in its power when it is one tenth in comparison (30W) and that is why it is recommended for personal use or in small informal meetings. Of course, the audio quality remains at a high level thanks to the “Sound Boost” function and certification by the specialized brand Meridian.

In preparing the article, materials from https://www.gizlogic.com/lg-xboom-on2dn-precio-comprar/ were used. Visit article here.