What soundbar should you choose? 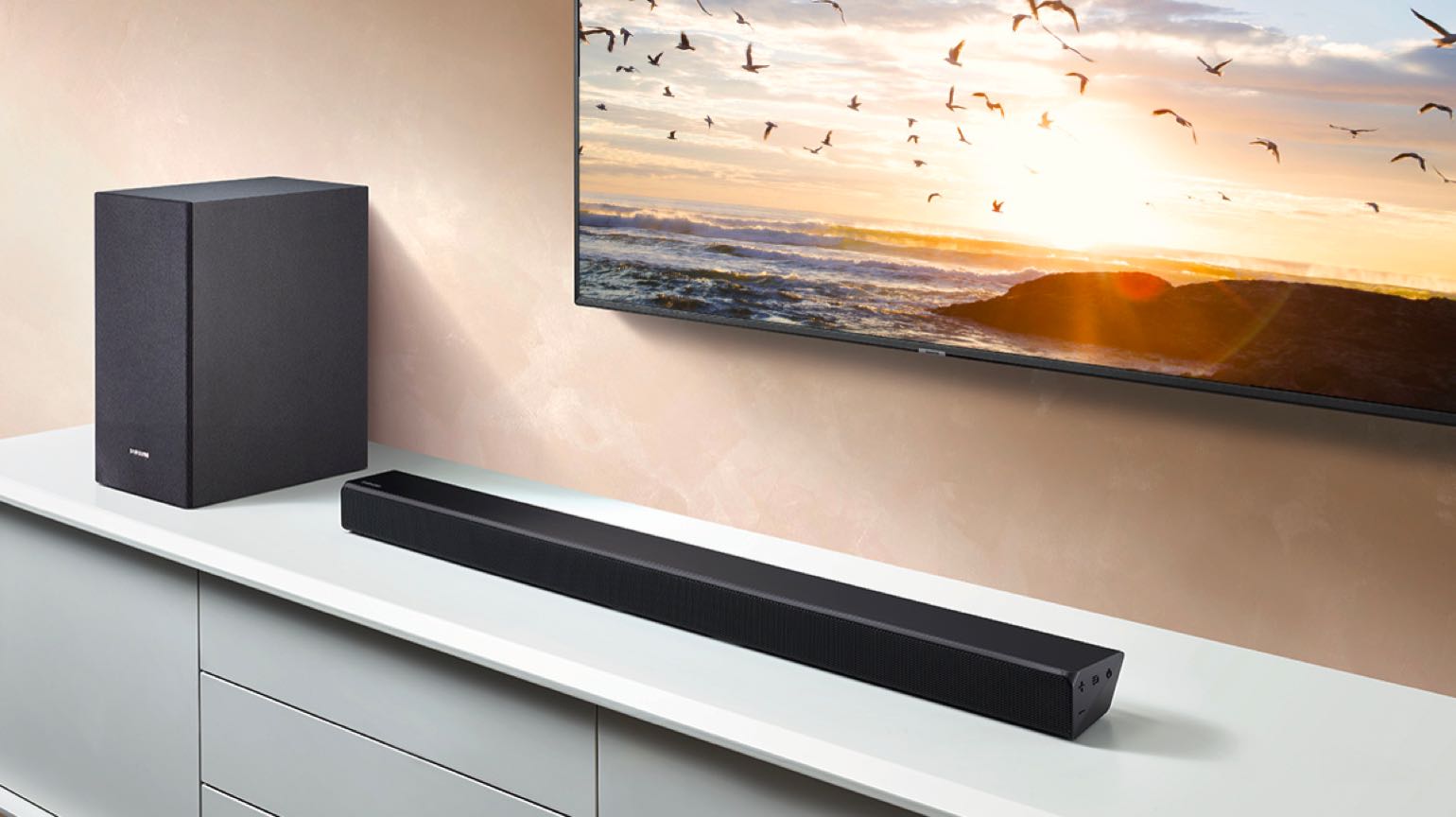 A soundbar is a solution for anyone who wants a better sound from home cinema setup, without immediately having to fill the entire room with speakers. The first practical disadvantage that many people encounter is that they have to be able to place the soundbar next to the TV. Whether it is due to a lack of space or a partner who does not like to look at such a device, the fact remains that the design of your TV corner must be adjusted accordingly. With this article, we’ll help you make a choice regarding the size and placement of your soundbar.

We probably don’t need to waste a lot of words explaining a soundbar. In short, a soundbar is an elongated speaker with a number of built-in drivers. These drivers differ from each other, so that a wide range of frequencies and tones can be produced. The drivers are also often placed in different directions, trying to simulate the characteristics of surround sound as well as possible. This then works through reflections in space.

Choosing a soundbar has its advantages and disadvantages, which you can read in detail in our article about the advantages and disadvantages of a soundbar . When you have made the choice to go for a soundbar, you will come across many shapes and sizes, from small and flat to huge colossus that are able to drown out an average symphony orchestra. The small and compact version may be easy to hide in a TV cabinet, but you don’t have to expect earth-shattering sound quality. At the larger sound bars, others may think you are overcompensating for something.

Of course there is no fixed ratio to which you have to stick to when you choose a soundbar for your TV (or vice versa). You can easily put your bedroom TV on top of a beast of a soundbar. Most people prefer a soundbar that is reasonably close to the television in terms of width. For smaller TVs you can use a soundbar on which you can place a TV. Such a flat soundbar is given different names from different manufacturers, such as a SoundStand or SoundPlate . These types of sound bars have been disappearing a bit from the market in the last few years.

A kind of unspoken rule is that the width of the soundbar is between 5 (13 centimeters) and 15 (38 centimeters) inches lower than the screen diagonal of the TV, depending on the size of the TV. If you have a 50-inch TV, you can easily use a soundbar with a width of 45 inches (113 centimeters). With a 75-inch TV, it is already a completely different story, because you will rarely encounter sound bars that are wider than 60 inches (150 centimeters).

A larger cabinet does not necessarily equate to a better sound, but you can assume that more different types of speakers achieve a much greater range. Especially the bass tones mean little in the more compact models, simply because there is no room for decent woofers in the small housing. The sound then sounds flat and pinched, and for a model where this happens less, you soon have to pay hundreds of euros.

A trend that makes sound bars more expensive and bigger is the arrival of Dolby Atmos . This standard has been developed to give a 360 degree sound where sound objects move around you. Now that standard has mainly been developed for at least 11 speakers in the room, so the effect with sound bars will certainly be less. Yet many top models today have support for Dolby Atmos. This means that they accept the Atmos signal, can reproduce a more spacious sound and often also come with extra drivers that are directed upwards and / or the sides. Those extra drivers try to create the Atmos effect by means of reflections on walls and ceilings. And for those extra drivers, extra space is of course required and the soundbar becomes a lot bigger.

With or without subwoofer

Not only the size of the soundbar itself can play a role. From a certain price range you get ‘extras’ with your soundbar that bring your listening experience to a higher level, but also take up extra space. For example, more expensive systems often come with a separate subwoofer. You will also have to make a place next to the TV for that box that produces low tones. The placement of the subwoofer is at least as important as that of the soundbar. This has to do with the fact that our brain can place low tones better than high tones. For example, if you place the subwoofer behind you, you will also hear voices coming from the subwoofer behind you. The perfect place for a subwoofer differs per person, so you will have to experiment a bit with that.

It does not fit!

Most manufacturers of sound bars put them in promotional images and videos in front of or under a television screen, or hang the soundbar on the wall under the TV. That is not without reason. Many people quickly slump in front of the TV, which means that the sound is actually the best in that position. So if you have the space to place / hang the soundbar in front of or under the TV, then that is also the place that we recommend. It is therefore possible to place or hang it above the TV, but it is more of a last option. In a setup with multiple speakers, the soundbar usually focuses on sounds in the foreground, such as conversations. It might be a bit strange to hear the voices mainly coming from above the television.

For those who prefer not to have a large TV cabinet, hanging a TV and / or soundbar is the best solution, but the wall and the surrounding furniture must be adapted to this. A wall bracket must be attached and a cable duct added to properly conceal plugs and cables from connected devices. Many premium soundbars come with their own suspension system, but keep in mind that you often have to pay extra for this.

With a TV cabinet you are even more bound to physical spaces. You are either forced to settle for a smaller soundbar that fits on or in your furniture, or you have to buy a larger TV unit that also has to fit into the decor of the room. The amount of space that the soundbar gets is also important for sound production. If a soundbar is placed in a (partially) closed cabinet, the sound will be muffled and tinny because it remains trapped in that cabinet. More expensive models often include drivers that point to the top and side, which means that functionality is almost completely lost when the device is placed in a cabinet. In these cases, you will always have to place the soundbar on top of the furniture, or buy a special cabinet that offers space for the sound.

A complaint that we hear more often recently is that a soundbar on a piece of furniture blocks the lower part of the television screen and often also blocks the infrared eye. This is the result of television manufacturers who, in their quest for a completely borderless design, place the TV low on its feet or mount it at the back. At the same time, the average soundbar is becoming increasingly large to be able to give space to larger speakers. This for high-end audio standards such as Dolby Atmos and DTS: X to be able to support. The combination of TV and soundbar is less and less taken into account. More and more sound bars are also being designed that only fit the televisions of the same manufacturer, and manufacturers that only make sound bars pay less attention to what those sound bars will look like when they are placed next to a TV.

There are a number of solutions to come up with. The most elegant solution is to hang the TV above the TV cabinet, leaving enough space for the soundbar and at the same time operating the TV without any problems. A simple solution to the problem of the infrared eye is to use an infrared extender, but that means an extra cable that has to be hidden. However, it is not a solution for cutting the image due to the height of the soundbar, if you suffer from it. If mounting the TV is not an option, you could always make an elevation on which you place the TV, but that is mainly something for the handy people among us.

So there are a number of things in the field of format and placement that you should take into account when purchasing a soundbar. In addition, it should be noted that even the most powerful sound bars cannot be a complete replacement for a true surround sound system. Although a premium soundbar has many speakers that broadcast in different directions, you are never completely surrounded by the sound, as is the case with a setup with multiple separate speakers.

Denon DHT-S416 is a 2.1 soundbar with Google Chromecast