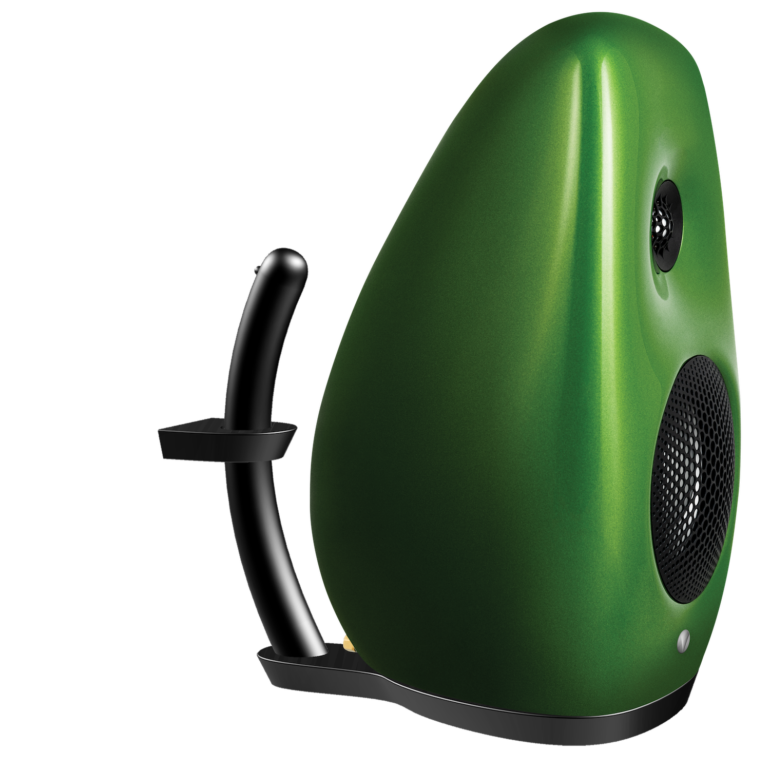 The Vivid Kaya S12 is a mini monitor. Seems harmless, has a ‘nothing-to-be-wrong’ appearance and a certain degree of cuddlyness. Once inside, the true nature manifests. Perhaps comparable to your mother-in-law. Therefore an introduction.

Vivid builds loudspeakers that keep the minds of critics and music lovers busy. After all, Vivid is synonymous with innovation. Not a manufacturer that simply builds loudspeakers in mass, according to concepts that have been in existence for 50 years. No, those who listen to a Vivid experience something new. Another step towards realistic sound. The difference between listening to your hi-fi equipment or listening to the music.

There are hundreds of speaker brands in hi-fi, with just as many models per brand. Amazingly, new brands are still being added. Speakers and hi-fi products have become a commodity product. Just like dishwashers and coffee makers. Loudspeakers are small, living room-friendly, business as usual, often have a nice design, apart from the mains connection they are ‘wireless’ and certainly sound good these days. But the real innovation is carried by a limited number of brands and individuals. That is no different in hi-fi than in many other sectors.

Only a limited number of groundbreaking loudspeakers were designed and built between 1930 and 1980 that really improved performance fundamentally and convincingly. In aviation, we are in about the same time span from Lindberg’s Spirit and Fokker’s Spinflew to the 747 and Airbus A380. Much more progress than within hi-fi. Laurence Dickie deserves the honor of being part of the world’s most innovative loudspeaker engineers.

He also clearly states that Vivid is not a loudspeaker designer, but a research organization. Laurence has made a name for itself with the matrix housing and the Nautilus for B&W (from 1983). For Turbosound he developed a number of horns with exemplary radiation properties and at Vivid (from 1997) his work resulted in the dust-blowing G1 in 2008.

Anyone who would come across an S12 will probably pass it by carelessly. A small ‘plastic’ speaker, which hardly weighs anything and does not stand out because of flashy colors and screaming layers of paint, although Vivid delivers a version in piano black and in colors of your choice. That is a missed opportunity. Finally the holy grail is in front of you and you don’t even recognize it.

This omission may also not be covered by insurance. But, with a height of 48 cm, a capacity of 12 liters and a weight of 6 kilos, this S12 can easily be seen as yet another computer speaker. However, Vivid itself speaks of ‘Small footprint, giant performance’. This is usually not reflected in the standard specifications in the brochure.

Two-way system with a port, 87dB efficiency, 45-25,000Hz frequency range within -6dB points and then dimensions, weight, standard colors, colors to order, wall mounts, stands and so on. How many do you want? But, just digging through it gets more exciting. This small Vivid has the famous tube loaded reflex of the big Gaya G1. There is a new long throw C100D bass / mid driver and the well-known ‘tube loaded’ D26 tweeter from the Vivid range.

Although the S12 looks fancy, modern and attractive, the housing is not just designed to put a trendy design on the market. It really is ‘form follows function’ here. The S12 was created after three years of development time and is intended as a monitor next to the floorstanders in the Kaya line.

Think of the Kaya 25, 45 and 90. A standard loudspeaker with the well-known plan-parallel six boards has a lot of internal resonances. Sound reverberates between all those surfaces and usually the resonances in the longitudinal direction of floorstanders are more problematic than the lateral movements.

With a small monitor, according to Vivid, those lateral movements also turned out to be disturbing. Subsequently, an absorber was built in the shape of a tetrahedron. That is a somewhat more complex mathematical form.

This absorber dampens resonances in all directions. The big additional challenge was to set it up in such a way that the ‘sound output’ from the bass reflex port would not be disturbed, which of course happens quickly if you mute internally in all directions. They succeeded, but the complex tetrahedron was not really suitable for serial production. This is where the shape of the housing comes into play. The back forms a ‘shell’, which is covered with a kind of wings on the inside. They dampen all resonances in all directions, but do not disturb the low energy via the bass reflex port.

So a somewhat more practical form, derived from the tetrahedron. The C100D bass / mid driver then also benefits from the lack of resonances and will logically be able to ‘sound’ very tight and neutral as a result. But the further design of the S12 housing was also not thought up at random, because it looks so nice. The tweeter is placed in a horn-like waveguide. This gives you extra output, but you also influence the time-alignment of the entire system.

It is essential that the polar response of the tweeter matches that of the bass / mid driver. If not, the frequency response in the off-axis region is not linear. Because this is in order with the S12, it is theoretically perfectly clear why the S12 achieved such an exceptional performance during a further stage of tuning. Something that simply does not work with many other monitors. 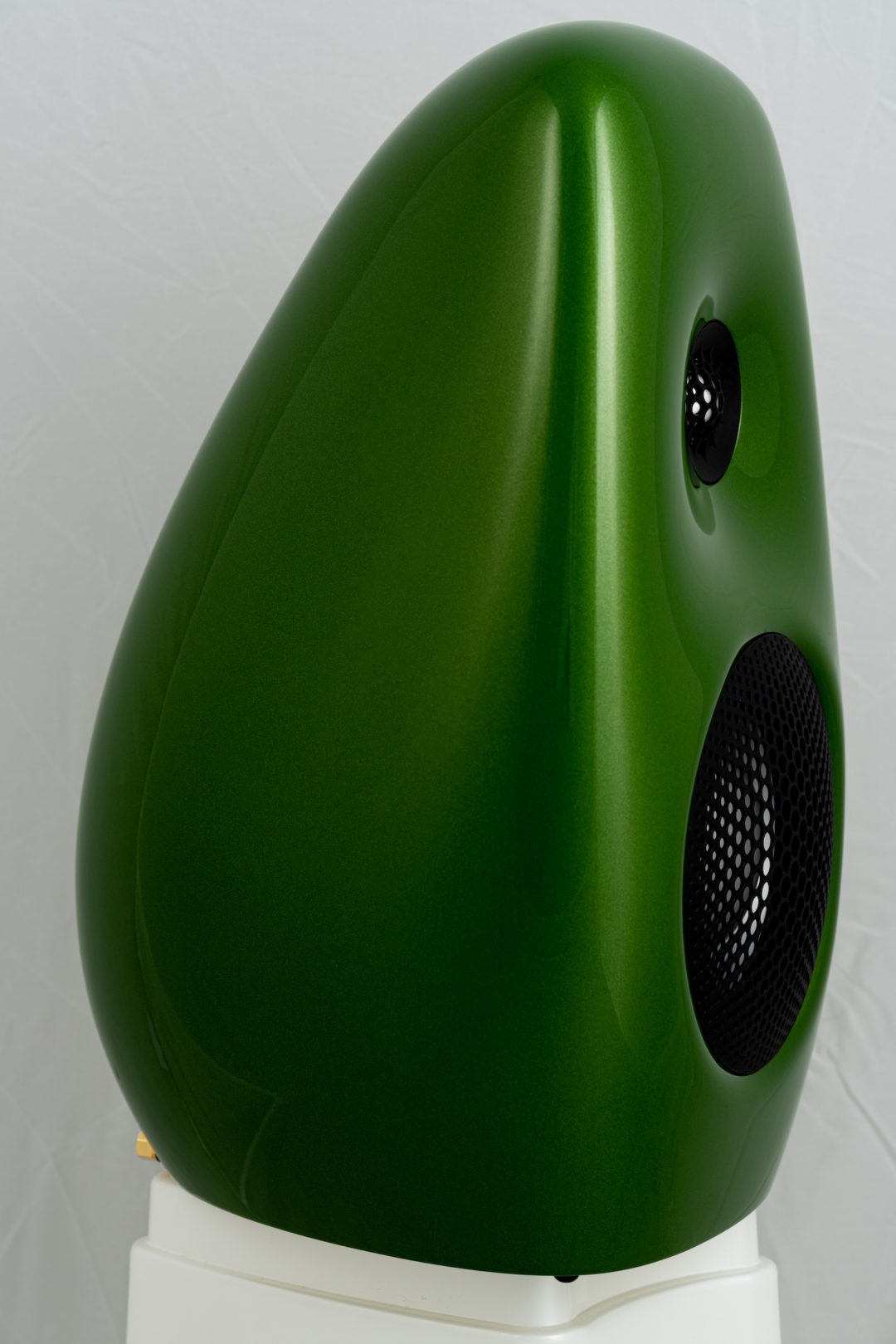 Listening to the very good performing system, in a kind of ‘standard setup’ around the S12, it starts to itch. Most mini monitors often give a somewhat ‘smaller picture’. It’s different from what’s possible with large floorstanders and systems like the Genesis 1, the Infinity 5, the PMC Fact Fenestria and the Lyngdorf LS. They are more space-filling and capable of a convincing live stage presentation.

A feeling then says that much more could be obtained from such a Vivid S12, although a consumer at home could already be very enthusiastic about how the system initially performed. That was absolutely first class. Well, the undersigned always takes a Sardinian pleasure in really pushing the limits of audio systems. See it as a deviation, as a kind of top sport,

After a visit to shows or shops, you are sometimes left with the feeling that it sounded good, but that there really is more to get out of such a product. In audio you should never rely on your gut, just measure, read the theory and arrive at logical conclusions and actions. In any case, the secret booklet with the most bizarre tuning tricks was consulted and a strategy formed to get a little more out of the S12s.

This booklet has been compiled over the years on the basis of experiences, conversations with colleagues from the (pro) audio world, from comparable booklets by professional (American) tuners and inspiration gained from contact with great teachers who were willing to share their knowledge. to share.

An example was Ken Ishiwata. He once demonstrated two small speakers, controlled with a Marantz set with a retail price of no more than 3K. Then there was an image of the Concertgebouw Orchestra, roughly 6 meters wide, with a sublime illusion of reality.

The collected world press was perplexed and did not understand anything about it. The trick is in the mentioned booklet. The approach, in general, basically consists of following theoretical models of how loudspeakers with a particular construction principle interact with the space and with the electronics.

The acoustics of a room offers certain possibilities, but there are also impossibilities. You can then manipulate what is possible (available in a particular listening room). That means that something like this is simply not possible in some rooms. Electronics can also be a limiting factor, but that was by no means the case here.

Form follows function. Every line, curve, rounding and surface of this beautiful plastic speaker has been thought through. Those who can tune well can use these monitors to build a system that creates a wall of sound. A real 3D presentation that hardly reminds you of listening to music through two small speakers. There is simply a stage in front of you with musicians. An almost perfect illusion, with a fabulous speed, detail, reality and neutrality. The rendering of the middle area is very nice.

The system is able to highlight the warmth and atmosphere of the recording. The bass is very tight, detailed and defined. It doesn’t go up to 20Hz, but with a very clever way of tuning it is possible to get within the octave where 80 percent of the music has the maximum low range, but that also works by placing a little closer to the wall. However, it will undoubtedly be exciting to equip these monitors with one or two subwoofers.

The thought then goes to the SVS SV-2000PRO. It integrates in particular with very fast speakers. Is neutral, fast and above all goes extremely deep. There are tones measured here from 20Hz with a sound pressure of 95dB. The S12 will soon be in the listening room for a second try and will then run into this experiment. In any case, the S12 is an amazing product. In the perception of the undersigned, this is one of the best monitors in the market. In fact the result of innovative thinking, which really brought the reproduction of music to a higher level.