Philips has announced its new line of Philips TVs for 2022. A wide range of TVs will be available throughout 2022, including flagship OLED TVs and 4K mini LED TVs. 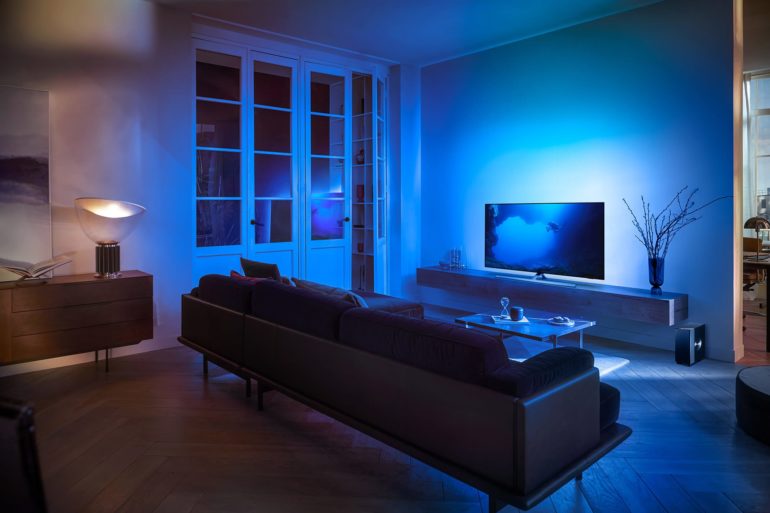 For 2022, Philips has shifted its focus from quantity to quality to TVs as the brand has several new developments to stand out from the crowd. We offer you to get acquainted with the main characteristics, markings and features of Philips TVs 2022 model year.

It is worth noting right away that a number of new Philips TVs were demonstrated at the TP Vision 2022 event. This event takes place most often in the UK. That’s why TP Vision usually doesn’t showcase its new products at CES 2022. Another highlight of this year is that Philips is going all out to support games: 120Hz, HDMI 2.1, VRR and the Game Bar menu option.

Philips has announced a wide range of new TVs for 2022 for different budgets. There are also several TVs with new technologies that you should be aware of. Chief among the new TVs should be Philips OLED807, which will be launched closer to the beginning of the third quarter. It will feature an OLED evo panel for the first time.

Some sources claim that this will be the new OLED EX panel , first introduced by LG Display in 2021. If we recall the experience of past years, then only the Philips 65OLED987 and Philips 65OLED937 models, which have not yet been presented in 2022, can get such a panel. Typically, the company announces the release of these TVs towards the end of the summer.

The OLED807 isn’t the only TV to look out for. The Philips Mini-LED 9507 is ready to be a superb TV with a 4K @ 120Hz refresh rate, 4-sided Ambilight for enhanced viewing immersion, HDMI 2.1 support that adds VRR (Variable Refresh Rate) and a low latency mode that Mini-LED will make 9507 is an excellent choice for gaming.

Philips will also release “The One” in 2022. The One 8807 will once again be positioned as a TV with many desirable features such as 120Hz refresh rate, eARC support and VRR via HDMI. 2.1 as well as HDR formats including HDR10+ , Dolby Vision and HLG.

Leading the way in image quality is the OLED 807 with the newly released P5 AI 6th Generation Image Processor. It introduces a new set of “smart” picture presets that get the most out of a 4K OLED display. This panel now uses LG’s newer OLED Evo technology, which has slightly higher peak brightness than regular OLED panels.

Viewers can select settings such as Eye Care, Dark Detail Optimization, or Color Temperature Optimization. A new version of AI Auto Film Mode has been added for seven film-oriented image presets (including Filmmaker mode ) to tailor the screen to your taste.

The OLED807 is now set to adjust the brightness and contrast based on the environment. In this regard, the perception of ambient light plays a more important role than before. The HDR formats are the same: Dolby Vision, HLG, HDR10 and HDR10+ and HDR10+.

However, this time around, they’re adding the expanded IMAX support that’s increasingly found in premium Disney Plus streaming content. The OLED807 is equipped with a 120Hz panel and HDMI 2.1. The TV has support for VRR (Variable Refresh Rate), low latency auto mode, and Nvidia’s AMD FreeSync and G-Sync technologies .

All this ensures a smooth gaming experience, even if the frame rate output from the console or PC is variable. There’s also a new Game Bar menu that gives you instant access to the most convenient TV settings that gamers may want to tweak while playing.

This allows you to get closer to OLED-like black levels without sacrificing brightness, while also minimizing the unsightly grays and washed-out shadow details that conventional LED-backlit LCD TVs can suffer from. Philips MiniLED 9507 with 4K resolution is available in 55″, 65″ and 75″ sizes. Its feature set is otherwise identical to the OLED807 series. This TV should be a good compromise between OLED and LED.

The Philips The One series is an attempt to demystify TV technology to provide a mid-range TV. Every customer can walk into the store and feel “not ripped off” when buying an 8807 TV. Compared to last year’s options, the 8807 series has some improvements.

The LCD still supports the Philips P5 image processor, which should deliver high color fidelity and processing of HD and SD sources on a 4K display, as well as smooth motion. Improvements are intended mainly for gamers. The TV offers HDMI 2.1 with eARC support.

The 8807 can also support 120Hz refresh rate, Variable Refresh Rate (VRR), and can use AMD’s Freesync Premium technology with smooth frame sync. Input lag is as low as 9ms, and the new Game Bar in the OSD allows you to customize your most frequently used gaming features on the fly.

HLG, Dolby Vision and HDR10+ compatibility is included, as well as support for Dolby Atmos output . The TVs are available in 43″, 50″, 55″, 65″ and 75″ screen sizes. Also available is a giant 86-inch model. This is the largest screen from Philips to date.

Philips TVs will be among the best for gamers who want to get the most out of their Xbox Series X, PS5 and PC game consoles. It’s not just the presence of HDMI 2.1 ports and a screen with a maximum refresh rate of 120Hz at 4K resolution.

You should also expect the new TVs to come with AMD Freesync support and, in some cases, Nvidia G-sync. Not only that, these high-end displays will offer Auto Game and Auto-Low-Latency modes that can bring input lag down to 9ms.

And that’s all in addition to a new “Game Bar” pop-up menu that gives gamers easy access to their TV’s gaming settings while playing. Combined with the great picture offered by 4K OLED panels and the exciting Philips Ambilight feature built into these TVs, the brand’s 2022 should be a year of joy for many gamers.

Looking for a complete list of Philips TVs 2022? It is posted below. There is no pricing information for Philps TV 2022 yet. During the year we will try to make reviews for each series of TVs. This list also includes the OLED807 series, which has not yet been officially announced.

Judging by the experience of past years, the appearance of this series will be announced in the summer. We assume that OLED707 will be different from OLED807 with dual channel audio and conventional OLED panel.