ASUS RT-AX55 is an entry-to-mid-range router with support for Wi-Fi 6 standard and comes with a number of additional features.

Currently, the list of Wi-Fi 6 routers available in stores is not that great. This is due to a certain delay in the start of certification of such devices in Russia, and more modern options – the Wi-Fi 6E standard – so far, apparently, can not wait. Cheaper and younger brands gravitate towards “bare” Wi-Fi – additional features and smaller Ethernet ports, faster wireless speeds. Bigger brands are already looking for a balance between cost and opportunity. And in the case of ASUS RT-AX55, to achieve it, someone may not have enough price reduction – by a thousand or two rubles. Strictly speaking, this is exactly how much – about five thousand rubles – it should have cost, if not for the disruption of the supply chain and production around the world against the backdrop of the coronavirus. But this is where anyone’s questions about the device should end: it turned out well both in terms of hardware and design – the top cover, although glossy, has a small notch, which helps to hide prints and dust on the case. 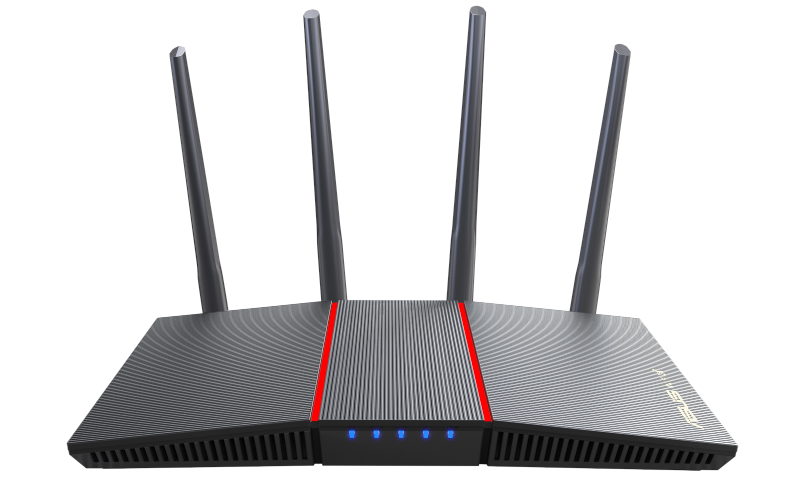 The router has dimensions of 230 × 134 × 56 mm and weighs only 374 g. This size-to-weight ratio is understandable – there is no massive heatsink on the board and is not required, and the board itself is small compared to the case, and it is very spacious for it. For ventilation, there are slots at the front and rear ends and at the bottom. It is a pity that no wall mounting is provided, although the design would allow it to be done. Instead, it is suggested to place the router on a horizontal surface. For this, there are four large rubberized feet on the bottom that will not allow the device to slide.

On the front end there are five blue indicators indicating the status and activity (from right to left) of the router itself, WAN and LAN connections, 5 and 2.4 GHz wireless networks. It is better to remember the order of the indicators, since their signatures are small, and the LEDs are very bright. Fortunately, they can be easily disabled by reconfiguring the WPS trigger on the back of the device. It can also be configured to quickly turn on / off Wi-Fi.

There is also a power socket on the back, a reset button recessed into the body, a large and easily felt power button and five Gigabit Ethernet ports: four LAN and one WAN. In the settings, you can assign one of the LAN ports for the second WAN connection in redundancy or balancing mode. On the sides and top of the block of ports and buttons – which is important, without blocking access to it – there are four non-removable antennas 17.5 cm long, which can rotate in two planes – 90 ° backward and 180 ° sideways. The RT-AX55 offers the baseline 802.11ax dual-channel scheme in the current generation with 80 MHz (5 GHz) and 40 MHz (2.4 GHz) channel widths, which theoretically give “clean” channel speeds of 1201 and 574 Mbps, respectively. In fact, in the 2.4 GHz band in modern urban environments, you will still most likely see only the basic 802.11n (300 Mbps) layer due to the high load on the air. But even at 5 GHz, the router can also roll back to lower speeds, which can be seen in the tests, and in the presence of devices without Wi-Fi 6, roll back to 802.11n / ac for compatibility. This is one of the features of all new generation routers that must be considered.

ASUS RT-AX55 is based on the Broadcom BCM6755 chipset , a highly integrated all-in-one solution that is perfect for this class of devices. Four ARM Cortex-A7 cores (up to 1.5 GHz) are complemented by 128 MB of flash memory and 256 MB of RAM. Interestingly, the BCM6755 formally supports Wi-Fi 6E, but this function is not used by any manufacturer in practice. But it is not worth hoping that it will work after the next firmware update – vendors hardly prepared the radio part.

The same chipset is used by ASUS ZenWiFi AX Mini (XD4) and RT-AX56U , the closest neighbor of RT-AX55 in the lineup, which differs primarily in the withdrawn USB ports and a slightly different antenna configuration (as well as the amount of memory, depending on the version) … But his price is a thousand rubles more. And if the beauty and compactness of ZenWiFi are not important to you, then with the RT-AX55 you can even save a little when building a mesh system based on ASUS solutions, since it also supports the AiMesh function.

In general, from the point of view of firmware, we have a regular ASUS router. But there are a few more additions to the typical functionality, which also become the standard even for simple models of this manufacturer. This, for example, is the AiProtection protection system based on Trend Micro technologies – it offers an assessment of the security of the router settings with recommendations for correcting errors, detecting and blocking infected devices within the local network, blocking access to malicious sites and parental control. The latter includes the ability to create a schedule for Internet access with binding by MAC address. Additionally, you can choose a third-party DNS server, including those with a filtering function.

With the wireless part, in terms of both settings and performance, everything is also not bad for such a configuration of a radio router. Alas, the problem with the adapter based on Intel Wi-Fi 6 AX200 has not disappeared since the review of ASUS RT-AX82U – for correct ax-connection in the 5 GHz band with the settings, you still have to “shaman”. In the 2.4 GHz band, we expectedly saw only 802.11n.

To measure velocities, iperf 3.1.3 was used everywhere. Jumbo frames – and this is the only additional parameter in the LAN settings – were not used. The stand with the wireless adapter, as in the previous tests, was in line of sight, at a distance of about four meters from the router.

To test the VPN servers of the router and normal NAT connection on Host A, we used a Hyper-V virtual machine with 2 vCPUs, 2 GB of RAM and Windows 10 Pro 20H2 connected to an X550-T2 adapter. If you believe the monitor in the router’s web interface, then a PPTP connection with MPPE128 encryption effectively loads only one core out of four, and without MPPE – two, but up to 70% each. OpenVPN with default settings (AES-128-CBC, HMAC SHA-1, RSA-1024) loaded three out of four cores with varying success, which, however, did not particularly affect the speed.

Setting up IPSec for an ordinary user is not trivial and, in particular, assumes that the router has a “white” IP and a DDNS name to generate a normal certificate. The same is required for the free built-in VPN service Instant Guard to work, but the process of setting it up is as simple as possible. Moreover, it almost does not load the router in comparison with other VPN connections: in total, at the peak for two cores no more than 30%, and usually even less. It practically does not affect the speed of the Internet connection.

Instant Guard allows you to protect Android or iOS when connecting to insecure networks (public Wi-Fi) by organizing a direct encrypted connection with an ASUS router. For the initial setup, you need the ASUS Router application with your router already added to it. When you start Instant Guard for the first time, you need to connect to your home Wi-Fi and just click Next or OK during the setup process. After that, with any connection to the Internet, you can simply open Instant Guard and press the only button in the center of the screen – in a few seconds the VPN will work.

Exactly on the same hardware base as that of ASUS RT-AX55, there are two more AX1800 class routers on sale: TP-LINK Archer AX20 and the already mentioned ASUS RT-AX56U. The TP-LINK model is slightly more expensive, but it has one USB port and a dedicated button to turn off the indicators.

And if from the point of view of performance we can assume equality, then we do not undertake to judge the competitor’s functionality. So when choosing between these two models, you can, apparently, be guided solely by love or dislike for the brand. But RT-AX56U ASUS refers to a slightly different league. From the functional differences: two USB ports (2.0 + 3.0) with the corresponding services + AiProtection Pro, and not Classic, like the 55th.