This time I will introduce you to one of the strangest wearable gadgets on the market – the monitored bracelet can broadcast music, turn on the radio, work as a camera control, store wireless headphones and … be an ordinary fitness tracker. 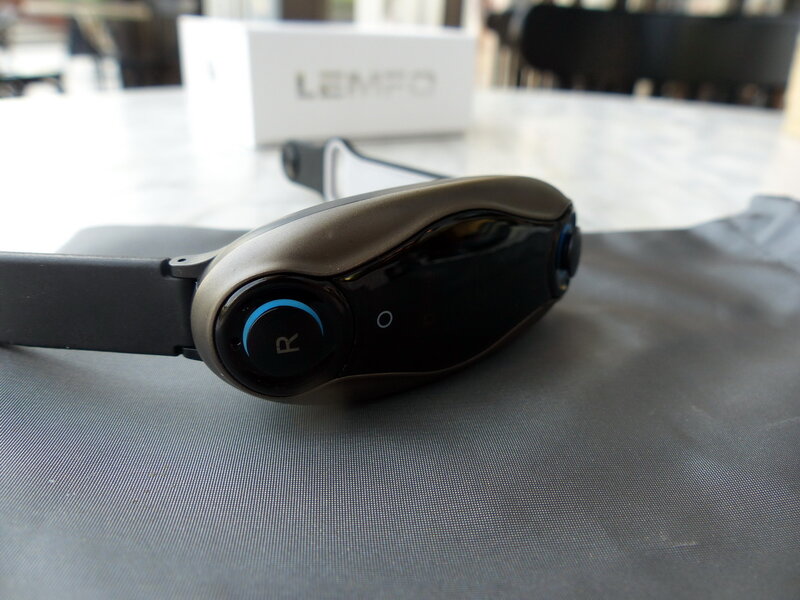 LT04 seems quite futuristic at first glance. Modern devices cannot boast of similar contours: the design of the trackers is well-established, the first time you can not tell Lenovo from Huawei. Perhaps this is one of the main advantages. But the fact that it is made entirely of plastic is a serious disadvantage. In this situation, the declared protection from water, sand and moisture is questioned – long contact with sand will leave noticeable marks on the LT04. The replaceable silicone wristband looks fresh. However, you can buy one not where you expect: the standard watch mount allows you to use children’s watch straps . As an alternative – buying in an official store on Ali (a scarce choice, to be honest. The strange “buttons” at the edges are nothing more than built-in detachable headphones. They use the bracelet as a base case, sitting firmly and securely in their magnetic grooves, even while running.

Not the most functional and bright display 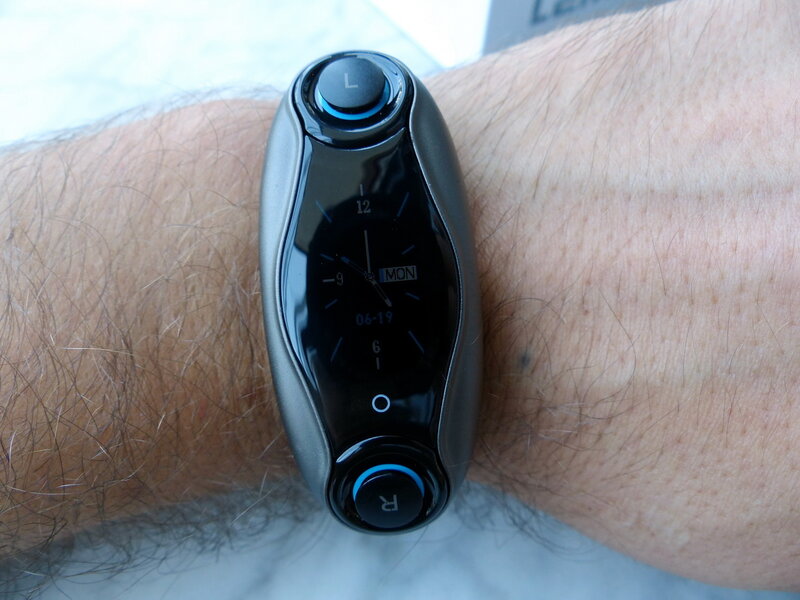 The screen is touch-sensitive, but to switch modes there is a single touch button with a circle. The display is dimmed most of the time. To activate, you must raise your hand or press the touch key. It is difficult to distinguish between the switched off screen, as it fits perfectly into the contours of the case. In the light, the situation does not change much: unfortunately, the brightness in passive mode is too small. When the display is activated with the control key, it becomes readable, but in this case the direct bright sun will become a serious obstacle.

But the protective glass glued to the screen from the factory is a nice bonus that you rarely find. And I suspect that without it, operation should not be carried out, especially in aggressive conditions. The watch has standard fitness functions: calorie counter, pedometer, and heart rate sensor. From the screen, the bracelet offers to use the basic functions, the transition between which is carried out by pressing a button. The main screen is represented by a clock, the style of which can be selected in the settings. Followed by daily steps, calories burned and heart rate.

In addition, directly from the screen, you can use the calculation of blood pressure and measure oxygen saturation.

The built-in push-button headphones are compact in-ear wireless earbuds that are identified as LT04 when connected.

In the case of the bracelet there are magnetized seats and contacts for charging: the headphones independently “jump” into them when approaching.

Each has a mechanical button that is used to switch tracks or answer / reject a call (symmetric control, each has a button). There are headset and call answering functions at the touch of a button. Can be used individually, leaving the other in place.

Synchronization between headphones is excellent, with a smartphone is also of high quality, but “thinks”. The LT04’s sound is comparable to the Redmi AirDots (given that Redmi’s sound bad): dry, simple and clearly not meant for listening to music. This is a headset for conversations and podcasts – you should not count on deep sound.

The shape of the gadget is comfortable enough for constant wear for several days. As with the Mi Band, it will not work: in a relaxed mode of use, the charge will only last for a week. If you actively use the heart rate monitor and additional functions, it will only last for 5 days. Charging takes 4 hours. Familiar magnetic contacts are used – exactly the same as in other models of Lemfo wearable electronics: a powerful magnetic base that independently orientates itself at the moment of approaching the gadget.

Charging in headphones lasts for 3 hours. The “ears” can be charged from the base only 1 more time, almost completely emptying the battery. The heart rate sensor looks like the heart rate monitor of the first Mi Band. However, the accuracy is normal, the measurements are the same with other fitness bracelets. The blood pressure and oxygen saturation measurement functions show an error of 10-15%, so the data is only suitable for a cursory assessment. The most annoying drawback of LT04 is the display of notifications without details. Only app icon and vibration, no text.

In fact, the Lemfo T04 has become an original concept that continues the idea of ​​a single wrist gadget for all occasions, which had previously been brought to life in a number of the company’s projects. Nevertheless, this “prototype” can be really used, and if sport is not the most serious component of life, it is quite successful. The location of the headphones is really convenient for short-term conversations. Talked and removed – they no longer interfere.

Lemfo offers a rather interesting accessory that allows you to stand out among the crowd of Xiaomi users. But the plastic is seriously embarrassing, and the sound quality does not allow us to unambiguously recommend: the option with Mi Band and AirDots turns out to be cheaper and more familiar.