Routers traditionally have simple box contents. As usual, the device comes with a small power supply unit and an Ethernet cable. This is all you need to create a home network.

No special knowledge is required for the initial setup. You just need to correctly connect the cable and go to the administrative panel, which will guide an unprepared user through the entire process with prompts further through the steps.

The interface design and all the actions taken here are practically no different from those in other routers of the company. Unless in this case, an inexpensive model allows you to use a mobile application to control and change parameters.

TP-Link Archer C24 is a small square box with four antennas. This time the case is made of matte white plastic. This is a much more practical solution than gloss, which covers almost the entire surface of the device, which the company’s designers clearly love. With this router, you don’t have to think about scratches that could appear even from a banal dusting.

The size of the router is relatively modest (115 × 106.7 × 24.3 mm), which will not force you to look for additional installation space, as long as the antennas are placed if the device is “hidden” somewhere in furniture. By the way, the antennas are not removable, but their direction can be adjusted. 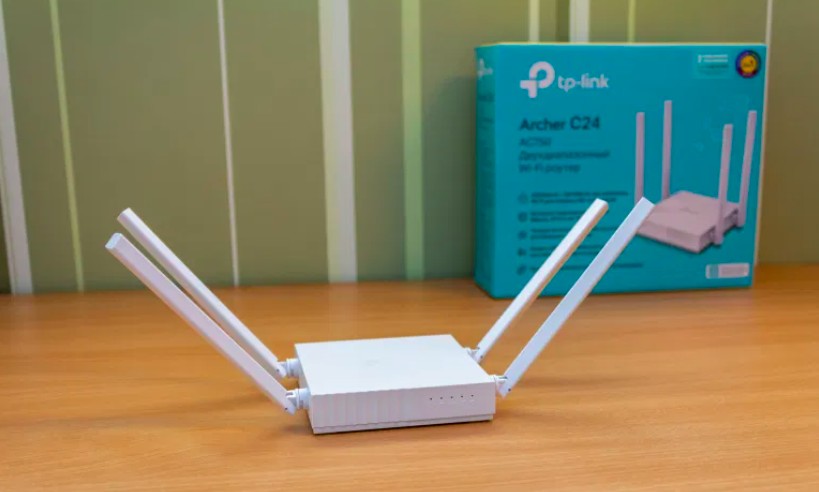 There are four plastic legs on the bottom of the case. Naturally, they will not be able to “grab” on almost any home surface, so the connected wires should be removed away from those places where they can be touched. There are also a couple of wall mounts. Interestingly, unlike most routers that come to us, the bottom of the Archer C24 is solid. There are no slots for ventilation on the case at all.

Of the “decorations” on this “Archer” there is only the company’s logo on top and a few “ribs” on the front side. There are five activity indicators next to them that can be turned off if they get in the way. All the same connectors are on the back: power port, WAN and four LAN ports. Next to them is a button for activating the WPS mode or rebooting. There is no separate power button.

Actually, the laconic design also repeats the ease of use. The router is small and not particularly noticeable (except that it can draw too much attention to itself due to the white case, because most routers are made in dark colors). It’s hard to say that something is missing here for an inexpensive device, but it would not hurt to “rubberize” the surface of the legs.

You shouldn’t expect any amazing figures from the basic solution. TP-Link Archer C24 operates according to the AC750 standard and the theoretical maximum speed in the 2.4 GHz band is 300 Mbps, and in 5 GHz it is 433. Obviously, this is not a device that provides a large fleet of connected clients with high requirements for speed. But, conventionally, for non-trivial tasks this may be enough. At low speed indicators, the router is equipped with 100-megabit ports. In principle, the initial router is no longer needed, but users who have access to a faster channel will no longer make sense to connect such a device.

Archer C24 can operate in three modes: router, access point and repeater. So, if the home network needs to be strengthened, say, in a separate room of a private house, then this can be done using such a device (again, not forgetting that the speed will be limited to 100 Mbps).

Among other things, the router is able to create guest networks, supports NAT Forwarding, restricts the access of individual devices to any requests and their network operating time using parental control, there is QoS, a few security settings and support for IPTV.

In the settings of the router itself, there are also the usual for the manufacturer the possibility of updating the firmware (only they need to be manually downloaded and “thrown” into the device), creating backup copies of the entered parameters, logs, diagnostics, rebooting according to the schedule and turning off indicators.

You can also “manage” the device using TP-Link Tether from smartphones. But you won’t be able to do this remotely, only locally. As is the case with other routers, the application does not have access to all items that are available through the browser, so this control method will be more convenient for basic configuration and changing basic parameters.

Basic routers, especially the AC750 standard, are clearly not created to impress the user with high-speed characteristics. In this case, they require more stability and a good signal. Our testing environment did not change where the Archer C24 was installed in the center of a two-room apartment. There is also a gigabit connection, which in this case was used at best by 10%. On-network speed testing was performed using two clients in the form of a ROG Zephyrus gaming laptop and an HP ProBook. In the 2.4 GHz band with a wireless connection, the data transfer rate averaged 77 Mbps near the point and 35 in the far corner. Connecting one of the laptops with a wire slightly increased the indicators to average values ​​of 93 and 48 Mbit / s in the same positions. Even the theoretical indicators of the 5 GHz range are not much higher, but in this case the average speed turned out to be even slightly lower. Wireless transmission rate was 87 Mbps near the router and 25 in the far position. With a cable for one of the laptops, the figures were 95 and 34 Mbit / s in the same places. With a wired connection, very predictable results were obtained that do not need a separate comment. The next week with the device showed that it is extremely rare, but the speed drops can be literally for a minute or two. It is possible that these were temporary difficulties with the provider, and not necessarily problems with the router, although this usually did not happen. There were also small pauses when streaming video from laptop to TV (using AppleTV). This was not the case with faster routers. And with the exception of a few such episodes, there were no more difficulties with accessing the Web, even large files could be downloaded at the highest available speed. And this is with 5-10 clients connected.

TP-Link Archer C24 is clearly not designed for demanding users. It is equipped with only 100 megabit ports and operates according to the AC750 standard, which will immediately “deploy” the buyer who already has faster access to the Internet at home. If the router is bought purely for brazing, online communication and other undemanding tasks, in a small apartment it will be enough if it is correctly located to cover the entire space with a good connection. But for a lower cost, you can easily find faster routers that may not support management using a mobile application, but can provide more comfort for everyday tasks within the network.

GameBoy Color made into a remote control for Apple TV