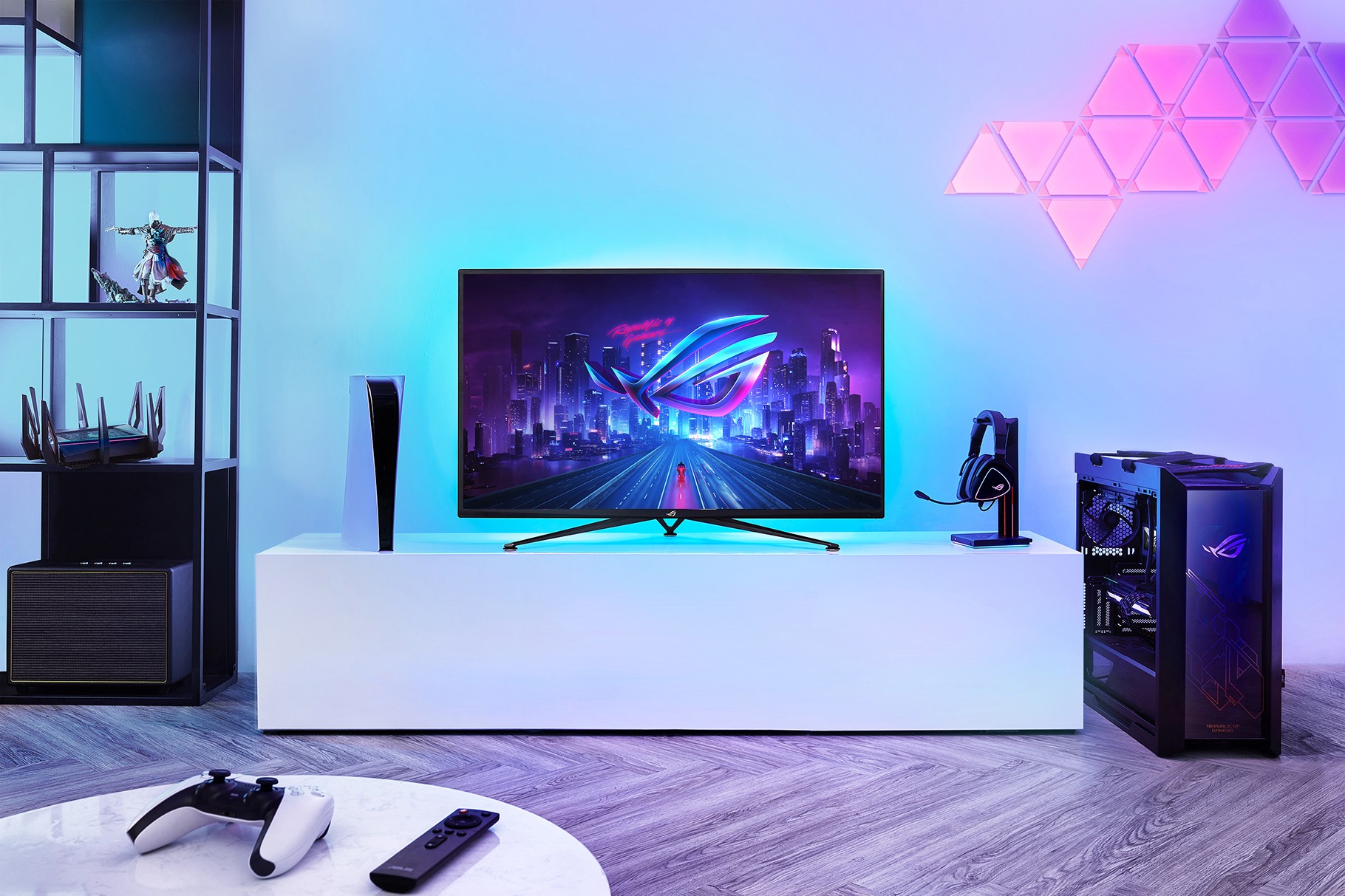 The Asus ROG Strix XG43UQ gaming monitor features rich, vibrant colors, fantastic contrast, a large screen and great speakers. An important advantage is that the XG43UQ is equipped with the latest HDMI 2.1 connectivity. This means you can take full advantage of the new NVIDIA GeForce RTX 30 or AMD Radeon RX 6000 GPUs.

This huge 43-inch display looks more like a TV than a PC display. It is designed for those who just want to enjoy watching the big screen while switching to PC or console from time to time. The Strix XG43UQ monitor impresses with a specification that includes AMD FreeSync 144Hz, 4K resolution and DisplayHDR 1000. Is this one of the best gaming monitors you can buy today? We will try to answer this question in the proposed review of the Asus ROG Strix XG43UQ.

The XG43UQ really looks like its own among TV models, potential monitors. For example, LG CX , Samsung QN95, etc. But the look is pure aesthetics, not a hardware highlight. There are few features here. The stand, for example, only adjusts the tilt of the screen, although a little height movement would be helpful.

The metal legs of the stand are technologically advanced in fact, and the frames around the screen are quite thin, although they cannot be compared with the frames of similar TVs. The rear panel of white plastic attracts the greatest interest for its futuristic look. The monitor can project the ASUS logo onto the surface on which it is installed. Since the Rog Strix XG43UQ looks more like a TV than a gaming display, it has a pair of 10W speakers. 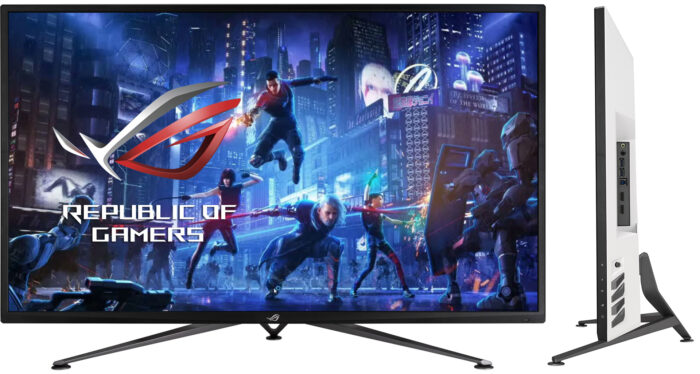 The speakers are loud, powerful and punchy, with reliable bass and decent quality throughout the range. They can’t compare to good TV speakers or soundbar. But they are not far from that level of quality and sound much better in games than any other monitor speaker.

ASUS XG43UQ also has a remote control that adjusts volume and settings. The XG43UQ monitor can also be controlled using the DisplayWidget, which displays the Windows OSD menu. Both options are good because the buttons on the back of this huge panel are hard to reach.

The Asus ROG Strix XG43UQ has a wide 43-inch diagonal, 4K resolution and a VA panel with 10-bit color. The 4K panel only delivers 102 ppi. But that’s okay, if you sit further away – you get the same clear image as on a TV. The 144Hz refresh rate is high enough to ensure smooth motion in any top-end game.

Asus has a DisplayHDR 1000 rating, one of the highest certifications available for gaming displays. And it’s better than the DisplayHDR 600 on the Alienware AW3821DWs. The declared response time is 1 ms. True, it was measured using MPRT. This standard shows better values ​​compared to GTG. So in reality, the response is noticeably worse. To run the best games at 4K resolution and a decent refresh rate, you’ll need a powerful graphics card.

For a maximum panel frequency of 144Hz, this would be something like an Nvidia RTX 3080 or AMD RX 6900 XT. Even if you want to run less demanding games at 4K and 144Hz, you will need an Nvidia GeForce RTX 20-series or AMD Radeon RX 5700-series or better because Asus uses Display Stream Compression (DSC) and only newer cards support this standard.

The monitor is also designed for consoles and has many possibilities in this area. The XG43UQ has HDMI 2.1 ports, so it is theoretically capable of playing games from PS5 and Xbox X / S at 4K and 120Hz. In reality, Asus is set to release an Xbox version of this display later in 2021. However, 4K and 120Hz are the future. Few console games are running this fast right now.

Strix XG43UQ has high contrast and vivid colors. The measured values ​​of brightness and contrast are 480 nits and 3990: 1, respectively (this corresponds to the brightness of the darkest point 0.12 nits). This value in VA matrix is ​​much better than that of any IPS panel . The Delta E value of 2.12 is not bad, the color temperature of 6110K is also good, although slightly warmer than the target.

These values ​​are complemented by the 98.9% sRGB coverage at 129.3% volume. This means that the panel can easily display all the shades needed for regular games. When watching SDR content, the maximum brightness is slightly above 900 nits. Activated HDR brings the panel brightness to a maximum of 1,070 nits and the contrast ratio to 5350: 1. The Asus XG 43UQ rendered 91.5% of the HDR-compatible DCI-P3 gamut.

When it comes to gaming, the monitor has a few quirks and limitations. For example, ELMB (Extreme Low Motion Blur) only works on one of the three horizontal stripes on the screen, not on the entire panel. This is not ideal, and the ELMB sharpening also dims the display. There really isn’t much difference between ELMB and Asus’s usual Overdrive settings. Both options sharpen the image, but both suffer from ghosting and ghosting.

Fortunately, normal sync provides smooth enough images for games to look decent, and the Overdrive and ELMB settings only marginally affect the legibility of things. If you leave these modes off, there will be blur during gameplay. But you will hardly notice it when you play from across the room. Enthusiasts should also consider that the XG43UQ panel uses a basic BGR sub-pixel layout. If you look closely at the text, it means that it is not as clear as on a regular PC display. You will find the same thing when viewing text on TV from a distance of ten centimeters. To make everything more readable, zoom in to 150% and the text will be sharper and clearer.

On the side of the Asus monitor, you’ll find two HDMI 2.0 ports, two USB 3.2 Gen 1 ports, and an audio jack. There are two HDMI 2.1 and DisplayPort 1.4 connectors on the back . Good connectivity, although this display lacks USB-C ports, which is a bit disappointing in 2021.

In conclusion of the review of the XG43UQ from ASUS, let us summarize whether to buy the ASUS ROG Strix XG43UQ or not. The LG CX 4K 120Hz 48-inch OLED TV costs less than $ 1,500. Those. The ROG Strix monitor is on the same level in terms of price, but LG is a better deal. If you don’t need a larger size, the 43-inch gaming display is a great alternative. Moreover, it contains DisplayPort 1.4 in case you want to use a gaming PC with a GPU without HDMI 2.1, as well as the Xbox Series X / S PlayStation 5 consoles.

Advertisement
X
Subscribe to get the best Tech news and reviews of the week.
By signing up, you agree to our Privacy Notice and European users agree to the data transfer policy.
Close
07/20/2021