At the moment, Contraband Police is not yet a finished product, but now I can confidently say that I will safely add the game to my wishlist and will wait until the next chapter is released.

The first information about Contraband Police appeared several years ago, but it was not until mid-February that the developers made it to the launch on Steam. True, it is worth noting that the full release is still very far away – now a demo version is presented in prologue format, which is available for free to everyone.

The rest of the chapters are promised to be added later, but for now, players are given the opportunity to get acquainted with the capabilities of the crime fighter. I have already done this and I can admit that I liked it even too much – now I am sitting waiting for the next chapter to be added and it will be possible to search the trucks again in search of contraband.

For obvious reasons, the developers could not take a real country as a basis, since various problems and even litigation could arise. To avoid this, the authors of the project had to come up with their own world, in which the player takes the position of a sentry at a checkpoint on the border of the fictional communist country of Akaristan in the 1980s. Because of this, the characters speak Polish, the cars have a strange name, and the location around us resembles one continuous village in the mountains. 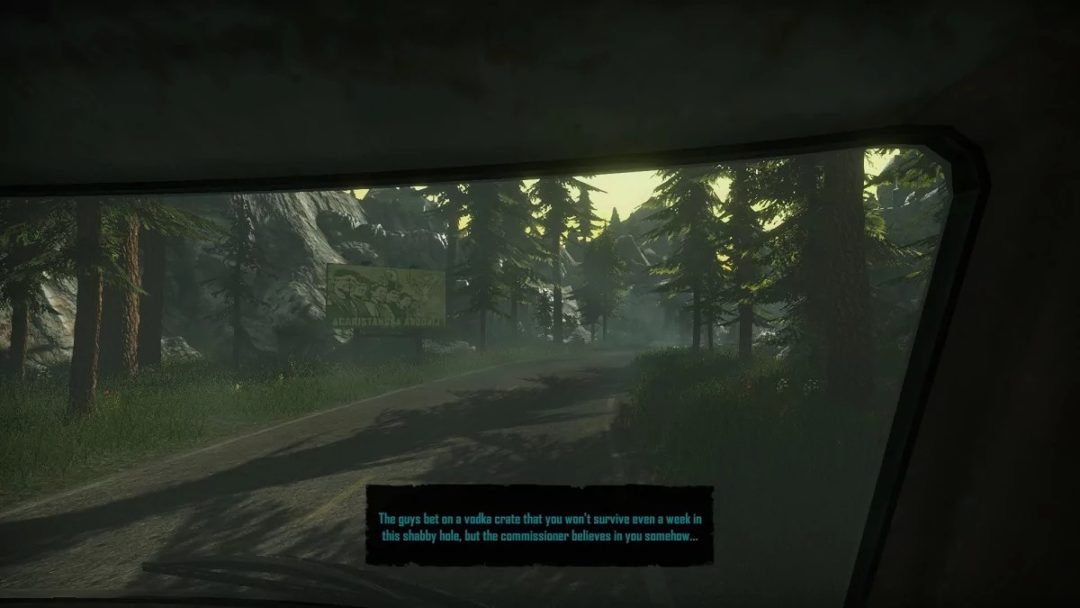 Actually, the entire prologue available at the moment is a conditional training of the player in all the basic mechanics of the game. First, they explain to us how to check the documents, then they show us where to rest, how to cut tires and seats in search of contraband, where to put criminals, and so on. After completing the training, all this seems very obvious and understandable, but the player would definitely not be able to guess the many gameplay features on his own, so the training deserves special praise. Moreover, you need to understand that the checkpoint post is not everything that is implemented in this simulator. We’ll also have to travel by car, catch villains, and even shoot from a pistol. 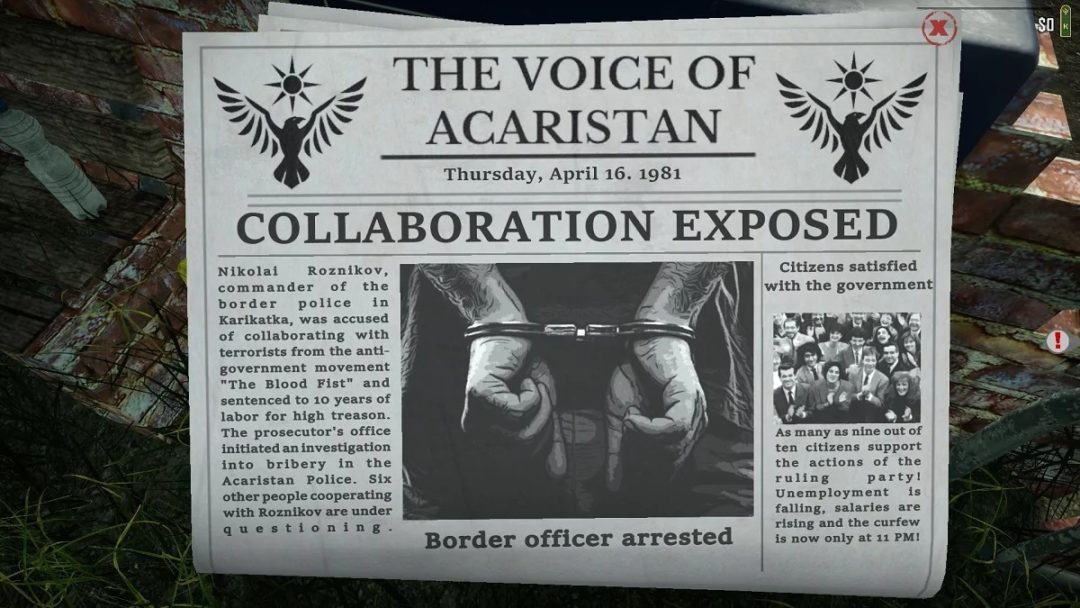 But the most important thing, of course, is to find the smugglers who want to trick you and smuggle something across the border that cannot be smuggled. To prevent this, the player needs to inspect the documents of the citizen and his transport. These are two completely different processes, which are connected with each other. First, the player must take the person’s passport and other documents, starting to verify the data with each other. It is necessary to verify the name and surname in all provided documents, compare the expiry date of the passport with today, compare the stamp and background of the passport with the official data for a specific country.

All the necessary data for comparison is available in the border guard’s notebook – there are indicated all the parameters that need to be paid attention to when evaluating the documents, there is a list of all currently available countries and all the data we need are indicated – what stamps can be, what passport colors are used in this country. Accordingly, if a person has one country indicated, and builds a seal from another, then it is worth taking a closer look at it and, of course, not letting it cross the border. And there are actually many such subtleties, but in an hour you will understand them at a glance. It is important to clarify that our border guard has a stamina parameter, which is spent every time you compare parameters in documents using mouse clicks. And if you recheck everything several times or miss the mark, then by the end of the working day your endurance will end, and you will have to compare names, document numbers and seals by yourself, by eye. However, this is even more interesting – there is no sense of casualness. Moreover, it makes no sense, for example, to spend stamina comparing names or passport numbers – they can be compared by eye in a couple of seconds, it is better to spend energy on something important or not spend it at all.

After checking the documents, it is worth opening the form and putting crosses in those points that did not agree, and then proceed to inspect the car. Open all the doors and trunk, look under the hood, run through the cabin looking for suspicious things. Here you can even unload everything from the trunk, inspect and compare with the import invoice, banning the entry of the truck if it contains prohibited items or goods. And, of course, you can not only inspect the interior for contraband, but also open seats, upholstery or tires in search of something prohibited. But everyone shouldn’t cut tires in a row – they will be fined if you just spoil a person’s property. To find a smuggler, you need to study the latest news reports, plus examine the list of suspects at a special stand. If, for example, there is a suspicion that contraband will be brought in today on such and such a car, then such a car should be inspected especially carefully. Moreover, always pay attention to the scales and the declared weight of the car on the card. For example, a passenger car came to me, whose body weight without a driver is 1350 kilograms, but on the scales it showed 1450 kilograms with an empty trunk. It is logical that these extra 100 kilograms are hidden somewhere. 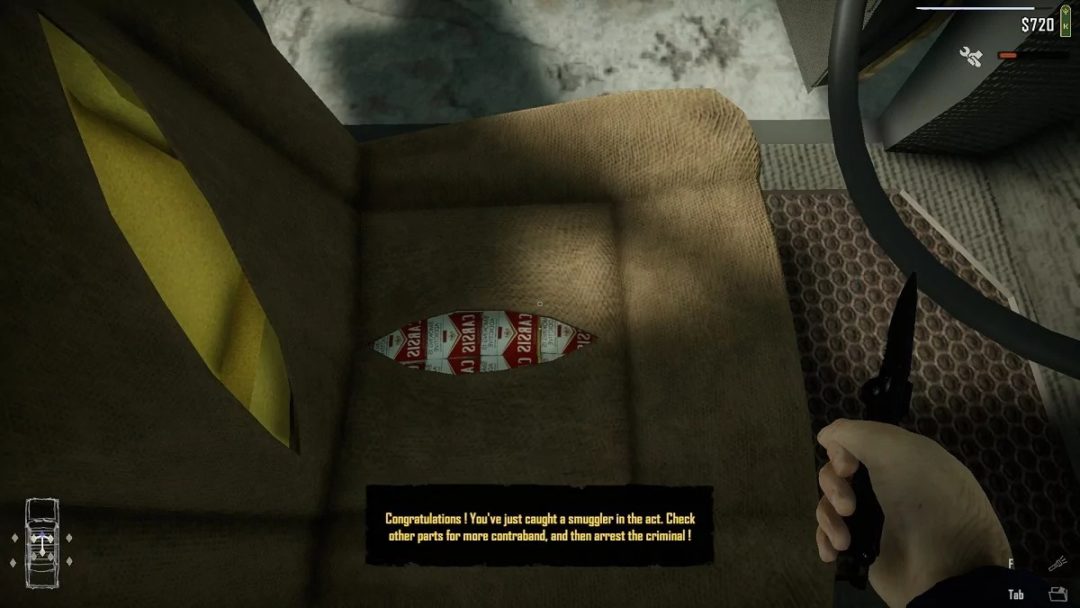 And by cutting the seats and tires of the car, I was able to find contraband in the form of cigarettes, alcohol, packs of money and even drugs. For this, a citizen who tried to bring all this good to the country was sent to a temporary detention facility, and everything confiscated was thrown into a warehouse. Oh yes, you can still close your eyes to the violations of the citizen and take a bribe, letting him into the country, or you can put an innocent person in prison. That is, the developers thought of the possibility of a bad guard, who in a bad mood puts everyone in a row.

Life outside the checkpoint

Surprisingly, the gameplay of the simulator during the inspection of documents and cars at the checkpoint does not end – the game has already implemented a fairly large map, although, of course, many locations are still closed. But the player has the function of delivering prisoners from a temporary detention facility to a prison, plus we ourselves deliver all the seized illegal to the state warehouse, receiving good monetary rewards for both these actions. For example, after the surrender of all the contraband and two prisoners, more than three thousand dollars fell into my account, which I then went and safely spent on tools.

Yes, in a communist country, the guard buys himself tools for opening the cabin, tires and other containers in search of contraband, so the gamer will have to periodically go to the merchant and buy everything he needs. This is a very interesting process, since you need to look at the map constantly, while turning on the flashing lights and not crashing into everyone. In addition, there are situations when attackers simply hit the gases, breaking through the barrier – in such situations we can sit in a “loaf” and overtake the criminal, crashing into him at full speed. It’s an insanely fun process, in fact.

At the moment, Contraband Police is not yet a finished product, but now I can confidently say that I will safely add the game to my wishlist and will wait until the next chapter is released. I liked comparing documents at the checkpoint, looking for inconsistencies and putting a red stamp in a passport, and the process of assessing a car, inspecting it and opening it are quite exciting activities. Of the shortcomings that have been identified at the moment, I can only note the voice acting in Polish and only two hours of gameplay – I managed to go through the prologue twice in one evening and was not even tired. I would like, of course, more.