Night over Manhattan. In the shimmering atmosphere of a city that never sleeps, buildings pile on top of each other. We notice a cloaked figure standing on the fire escape of one of the skyscrapers. Human  looks out the window… And through the dull glass, in which the neon reflections of the night city are reflected, he sees a man sitting in front of a typewriter.

The tie is loosened, the collar of his shirt is unbuttoned, his hands clasped his head with disheveled hair. There is a hat next to the typewriter, there is already an incomplete glass of whiskey, an ashtray with a smoking cigarette in it. A sheet is sticking out of the typewriter, on which only the title is written. Genesis Noir. A person raises his head and looks somewhere into the distance – and we understand that he sees an event horizon in front of him, now receding, now with a sharp razor approaching his throat.

Oddly enough, games are still trying to raise money on Kickstarter – this practice may not blow up the news every day, as it did six years ago, but it has not gone anywhere. This tool is now being used more to grab the attention of the public and investors than to actually fund video games. At least, the Genesis Noir campaign, which took place in 2017, did not aim at a very significant amount – $ 40 thousand. But if the goals of such campaigns can change over time, then the result – never. The game was promised to be released by December 2019, and it was released at the end of March 2021. Classic. Everybody here is night owls

But the game itself is certainly not a classic. This is jazz, improvisation on a topic that goes too far. No, the word “too” for Genesis Noir is perhaps inappropriate.

The watch dealer (and, obviously, the time itself) No one who also makes up for playing the saxophone and moonlights as a private detective, had an affair with the jazz singer Miss Attraction (it is untranslatable) – and became part of a love triangle that ended in tragedy. To stop the tragedy, Nobody decides to do the most obvious thing – to return the universe to the state before the Big Bang. And, making notes on napkins, proceeds to the planned, recreating the entire process of creating the Universe from the beginning to the present moment. Oh yeah, this is the much-touted opportunity to dial a dial phone – you know how it’s done?

To do this, our hero, who never takes off his hat and raincoat, will have to move from the world of endless night and rain … Into space? Primary broth? Into the state of “up to molecules”? To medieval Japan? The Large Hadron Collider built on Mars? What-oh-oh-oh-oh?

Any attempt to describe what is happening in Genesis Noir leads to this very “what-oh-oh-oh-oh”. To the accompaniment of futuristic jazz, absolutely incredible things happen – in a minimalistic, almost monochrome and invariably geometrically verified setting, we travel through time and space, in a metaphorical form we encounter the initial situation and somehow understand it. Until we create a black hole. What happens next defies any description – and why are there spoilers? It is important that the monochrome style is retired, the screen explodes with all the colors available to the artist, and jazz gives way to electronics. The creators of the game, the Feral Cat Den community, go completely ahead – although they end everything with an unexpectedly calm, touching and noir in spirit ending, nicely looping an endlessly strange story in its essence.

In fact, Genesis Noir turns out to be a free jazz session, where the authors of the game, like musicians, keep a tune that is barely perceptible at some moments, planting a series of solos on it. In form, this is a traditional point and click, divided into separate chapters, which are interspersed with small scientific information about the structure and origin of the Universe. 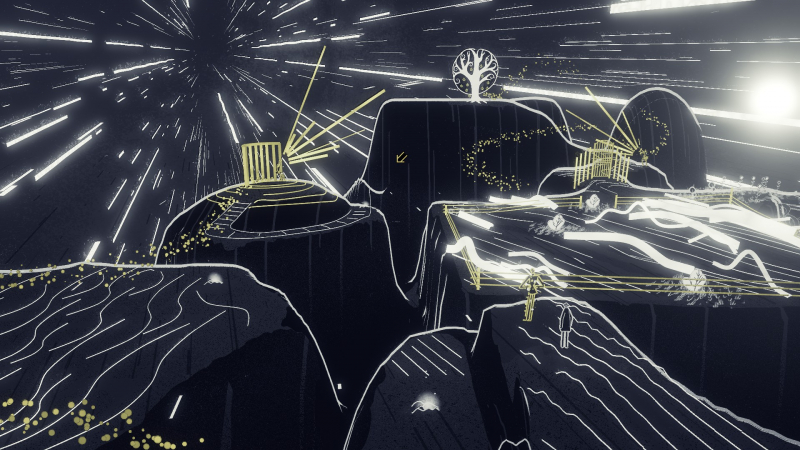 Uh-uh, well, it’s like a visual depiction of string theory

For the most part, no intellectual effort is required from the player at all – Genesis Noir is primarily an atmospheric and imaginative game, rather than challenging the brain (it challenges the mind and psyche). It is necessary to find active elements on the screen (as a rule, it is quite simple to do this, pixel hunting is almost not required) and somehow swing, spin them, throw them into something else that is on the screen. In fact, despite the fact that the game looks spectacular on the big screen, Genesis Noir would fit very nicely, for example, on a tablet. You want to touch it, touch it and get a feedback – for example, vibration. Most of all, in terms of gameplay, it is similar to the creations of the KO_OP studio – GNOG or Winding Worlds (Apple Arcade exclusive).

But at some point, she suddenly offers puzzles, simple in nature, but slightly discouraging from surprise. I got stuck on one for half an hour, quit the game and came back an hour later with a fresh head – and solved it in 20 seconds. That is, in fact, in a psychedelic adventure, No one faces difficult tasks, but the sensation of flow, which is so necessary to free the mind, sometimes fails. There are also glitches in the technical performance of Genesis Noir, which are quite natural for the studio’s debut project – some freezes, crashes, broken, but working after restarting the problem. I hope they will be corrected by the time the game is released (the text was written before). As a last resort – cured by the first patch. In any case, I did not notice any critical failures that did not allow the game to pass. My head is towards the end of the game – and yours too, by the way

Just as I did not notice even five hours that flew in this strange and unimaginable world in one go – Genesis Noir surprises, puzzles and amazes almost continuously, there is simply no question of fatigue or routine of the process. The only reason you want to pause is to breathe and gather your sprawling thoughts into a bunch. Yes, this is a really dynamic point and click.

Pshshshshshikhhh. The match struck the boxes. Dark matter, reduced to one infinitesimal point, fluttered. The universe began slowly (in 10 −42 s) to fill with things. Overcast sky. Rusty fire escape. Raw red bricks of an old skyscraper. Dim glass with neon reflections. Chair. Table. Hat. An ashtray with a burned out cigarette. A typewriter with a sheet sticking out of it, already filled with text. The period is after the word “text”.

Genesis noir offers very straightforward in mechanics while it takes on its impeccable atmosphere, style and a tower-blowing flight of fantasy. Buy it!