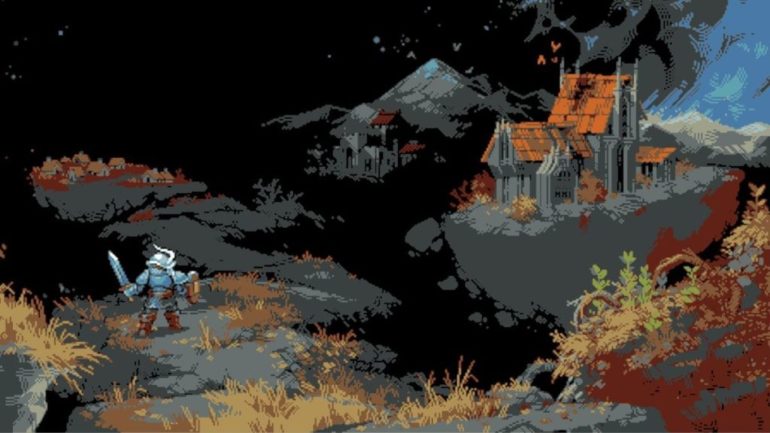 The end of the world has come – the universe is sinking in the abyss of oblivion! And only a mysterious hero with extensive amnesia is able to prevent the death of existence and restore at least a piece of the former universe. His memories break through the thick curtain of nothingness and the firmament of an anomalous time loop, re-creating the lost reality bit by bit. But not everything is so simple: powerful enemies will soon appear on the path of the savior – architects and builders of the end of times …

But the great battles for the fate of the universe will wait. After all, our main goal is to restore peace, which at first is only a gray circular track. Its only content is a hero, a fire and a couple of aggressive slugs. These opponents are solely for seed: from them we will get the primary equipment and game cards that are responsible for the creation of the world.

Basically, mined maps are divided into road, roadside and landscape maps. The first category includes a variety of locations – villages, cemeteries, swamps, wheat fields, ancient ruins and other populated, and not always people, points. After setting a point of interest on a cell, you can expect useful bonuses when passing it – for example, somewhere a hero can restore health undermined in battles or, say, pick up a shard of a valuable resource. But the main thing is that opponents regularly appear here, the main source of new cards and ammunition … or heroic death. 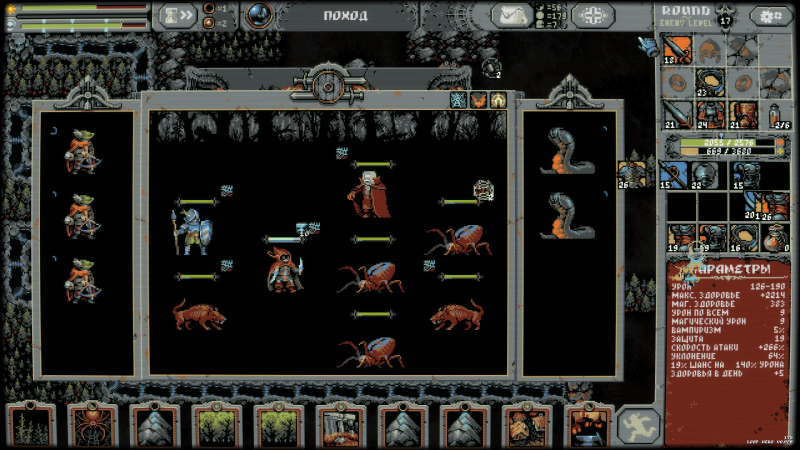 The only thing in which we do not directly participate is, in fact, the battle. Unless the equipment can be quickly replaced

Roadside maps have a slightly different function – they, with rare exceptions, are designed to help us on our hikes. Traffic lights disperse clusters of enemies, in the bookstore they will change three random cards for, perhaps, something better, the outpost will provide help in battle on adjacent cells, and in the blacksmith shop they will provide the effect of armor at the price of items from our inventory. But, of course, in this category there are options for the amateur to complicate his life: the mansions of the vampires will take the fanged out to battle if it unfolds in the neighborhood; the battlefield creates a chance that the defeated enemy will return to the mess in the form of a ghost (and a ghost has a chance to return in the essence of a ghost ghost …); cocoon, without too much fiction, creates spiders on adjacent cells … Yes, and establishments with positive effects, it happens, will release some revived armor,

Manipulation with your own and not only characteristics is the purpose of landscape maps. Rocks and mountains increase the percentage of hero health; the deserts, on the contrary, reduce it – true, not only to us, but to all beings in the session; forests and thickets increase attack speed; while the suburbs contribute to the build-up of additional experience in combat. Filling the voids with muddy river waters or impenetrable thickets, it is worth remembering that measure is good in everything – if you overdo it with the greening of the world, you can get unexpected consequences.

For example, if you collect a three by three square from mountain cells, a mountain peak is formed, which significantly increases health, but a harpy will land on the map, opposing our campaign for personal worldview reasons. Creating a vast forest belt is also fraught – on the road there will be a “village?” Cell, an eerie attempt by the thicket to simulate a human settlement. The copy, by the way, is quite accurate – even wooden “clones” of the hero will periodically appear here, a collision with which is still an attack.

Fortunately, you can always get rid of unpleasant sectors with a special “oblivion” card, which brings almost any cell to its original form. Whichever tactic you choose, it’s best to always keep it in the deck. Less need for other special maps: lighthouses, temple of lightning and treasury. The bonuses from them seemed to me too insignificant to overload the deck.

Still, you are allowed to take a maximum of fifteen cards with you on a hike. So the optimal selection of the deck comes to the fore: to collect more potential troubles in order to risk your head, increase the chances of good loot and speed up the gain of experience, or take more supporting “cards” to walk in circles without risk to health. Dilemma! 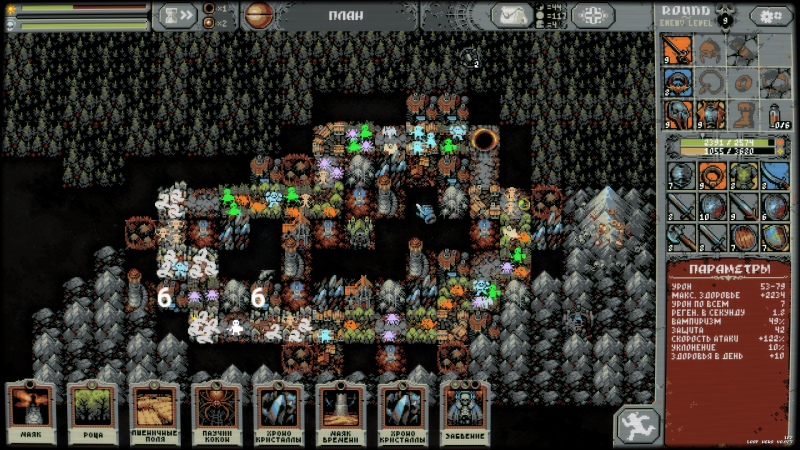 Problem from 3DNews: find the hero of the game in the picture. Reflection – five seconds

It is equally difficult to choose a suitable gold card – a unique building available at the very beginning of the game and giving significant advantages when used correctly. The ancestral crypt, for example, takes away all health bonuses from uniforms, but it allows you to increase the maximum hit points at the expense of killed enemies “with a soul”, the arsenal allows you to put on an additional piece of equipment on the hero, but reduces the quality of equipment by fifteen percent, but the memory maze is unexpected “doing nothing”…

It’s a pity that powerful “gold” is not immediately available, like most ordinary strong cards. They still have to be unlocked by building the appropriate structures in the stronghold of our great campaign.

Village at the End of the World

The Accountable Settlement plays an important role in the adventure, as it should be, and is as responsible for the success of the adventure to save the world as it is for judicious use of the cards during the campaign. For example, a variety of buildings will bring tangible bonuses on sorties. The herbalist’s hut will give an opportunity to kiss the healing bottle; the forge will provide the hero with basic equipment at the beginning of the campaign; the gymnasium will open the boundless world of knowledge, embodied in the classical system of levels and talents; and the watchtower will set up a patrol near the fire, which will fire at all enemies (except for bosses) during the battles on the nearest cells.

There are also buildings that are useful in a different way – a lumberjack’s shack or, say, farms will supply us with important resources after the expedition, rewarding for each circle passed, but not more than a certain maximum. The hero can also draw strength in other places – from warehouses and dugouts. Living spaces not only improve the quality of life of the last of the people, but also increase the maximum of supplies. Sometimes jokes in dialogues work out well, but sometimes the jokes seem a little unsharpened …

Furniture, tools, food and jewelry give even meager, but still useful passive buffs. An alchemist shelf will increase the maximum healing potions on a campaign, a gothic count’s chair increases the level of vampirism (the ability to heal with damage), a kitchen knife will give one percent to health for each food item installed in the corresponding category, and a piece of cheese restores one health point for a defeated enemy. Closer to the end of the adventure, the old portrait will definitely come in handy, which increases the damage to bosses.

And new playable classes are opening up in the settlement. Having built a den, the hero will be able to exchange the warrior’s armor for a rogue’s cloak. And having erected a sinister crypt, you will be able to try on fashionable accessories of the necromancer. And this will change the game fundamentally …

A hero out of time

The classic warrior is tough, deals good damage and is able to develop the indicator of vampirism to a frightening level, becoming almost immortal. A clever rogue cannot boast of health strength, but he has the right to boast of a high damage rate and a developed ability to avoid enemy attacks, and he also receives significantly more equipment on sorties. The necromancer prefers not to get his hands dirty, leaving the summoned skeletons to participate in fights. It is to increase their power that most of the class’s features are designed, and in order not to join his wards, the vulnerable lord of the dead envelops himself with a layer of magical armor. The warrior wears a sword, ring, shield, and armor. The rogue prefers two blades, armor and boots, and the necromancer will do without weapons at all, taking instead a dusty grimoire, a pair of rings and an amulet – style is still more practical …

Of course, the classes also differ in the talents given out for the levels. One is given an increase in health for the potions drunk, the other compensates for the loss of vitality with an increasing chance to inflict incredible damage, and the third has the opportunity to increase armor at the expense of the summoned allies. There are also general improvements for everyone – a chance when using it not to spend a charge of a bottle with a healing broth, an extra life, or the ability to choose from a different set of talents. Skills, by the way, are given out in a random assortment, so it won’t work out this aspect in advance.

Interesting class nuances lie not only in skills, but also in interaction with cards. For example, at the outpost, servicemen will surely enter into battle side by side with a warrior or a rogue, but a necromancer, despite all the arguments, will be insulted and fired on a par with spiders, vampires and revived scarecrows. Oh, these prejudices.

The interclass difference is felt in the context of a successful passage. The necromancer personally seemed to me the weakest of all. The poor guy often did not live to see the boss in any of the locations. Dodger, on the contrary, is overly strong, and with a successful combination of talents, he can beat the final antagonist (and this is no less a local Creator) with supernatural ease. A warrior is also powerful, but at the end of expeditions, especially in fights with bosses, a hero clad in armor can blunder. In short, it seems that the balance still needs a little work. But the history of Loop Hero definitely does not need polishing …

The Loop Hero storyline echoes the game’s peculiarities in an amazing way. At first it seems rustic, but with each new stage it is revealed deeper and deeper. The dialogues are not devoid of a successful irony over the typical genre clichés and conventions of their own universe, and quite mature theological and philosophical reflections are hidden behind the simplicity of awkward puns and the ease of situational witticisms.

The story, represented by different characters, constantly flirts with us, making us doubt everything we know about the game world. And, surprisingly enough, he manages to keep his interest until the very climax. The ending cleverly implements a couple of plot twists (one of which is really unexpected) and easily creates the basis for new campaigns. And not in vain – they will definitely happen!

Loop Hero surprises with elaboration, touches with dialogues, frightens with the ability to absorb free time – such is an unexpected treasure!