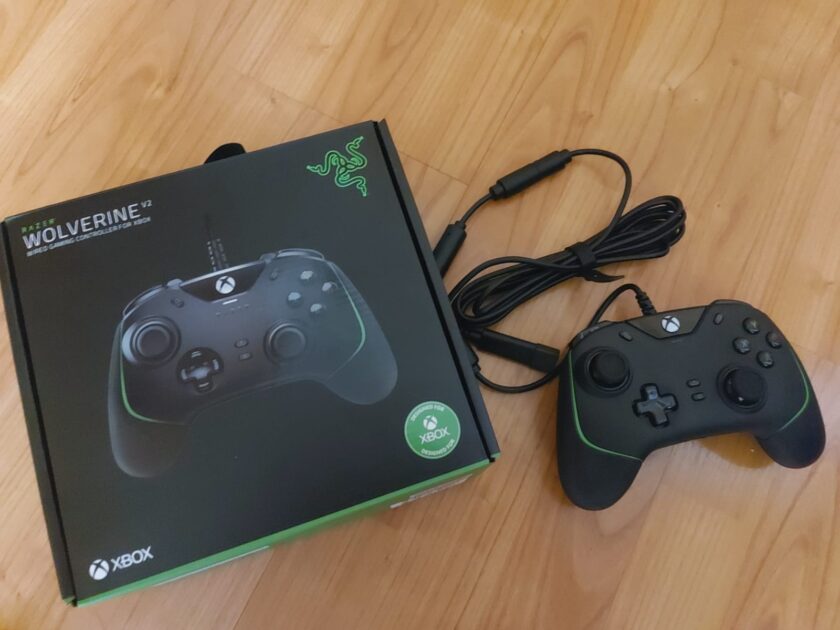 We all know that Razer is a select “guild” in the gaming world. The manufacturer’s systems and peripherals often tend to compete with the gadgets of other reputable companies. The new Wolverine V2 is based on this principle, a wired controller for Xbox Series X | S, but also for PCs with Windows 10. As I said, I play most often on PC, but a controller is a very important accessory. , so I took this toy to a test glass and I was pleasantly impressed.

For subtitles, Wolverine V2 is an improved iteration of the Wolverine Tournament Edition. Thus, Razer gives up the ” breezes” of  its predecessor in favor of a very useful ergonomic shape, which ensures a better grip and maneuverability.

Razer Wolverine V2 has an elegant and subtle look, with a matte black finish. Nothing extravagant or excessive, and the grips have an advantageous contour, over which a non-stick rubber layer is applied. The location of the buttons is on an ordinary Xbox controller, but the Razer controller is equipped with two additional buttons, which rest next to the standard triggers. Even though their number has been reduced from four ( present on the Wolverine Tournament Edition ) to two, the additional buttons can be extremely useful during intense gaming sessions and I will tell you soon why. The interesting part about the construction of the Razer Wolverine V2 is that all its buttons, including the D-pad, are mecha-tactile, ie based on the clip. Thus, their pressing is not only more precise, but also provides satisfactory feedback.

Razer Wolverine V2 – Play it before!

The controller looks good, it feels good, but we have to see how it handles in-game, right ?! That’s why I took some soul games out of the mothballs, along with some multiplayer titles and some freshly released jewelry. Taking in the virtual worlds of Dark Souls, Assassin’s Creed Valhalla, Mortal Kombat X and Warhammer 40,000: Mechanicus, Wolverine V2 was my reliable ally and dear friend, and the games chosen were only good for a detailed analysis of the controller. from the Razer. Let me explain

First of all, the controller moves excellently. The haptic feedback works very well, it even starts with cleverness exactly in the tense moments during the games. This definitely adds to the experience. The titles I chose are part of several genres, including turn-based strategy. Here I was delighted to learn that all my wanderings are optimized for such an Xbox / Windows 10 controller. The interface is easily rewritten, including that of the Ubisoft Connect platform, and the transition from mouse & keyboard to controller is instant.

Thus, the games seem to have changed; Mechanicus, for example, becoming a turn-based strategy very easy to button, offering an interface through which you can navigate much easier. Going beyond the other classic examples of using a controller, Assassin’s Creed Valhalla and For Honor proved to be excellent for the Razer Wolverine V2 from birth.

The additional buttons that Wolverine V2 is equipped with were very helpful. For increased reaction speed and not to frantically move your fingers left and right, you can quickly press the extra buttons, which can be customized in the installable software. Attacking, parrying, consumables and the like is no longer activates only the location A, B, X, Y . From now on you can access them much faster. 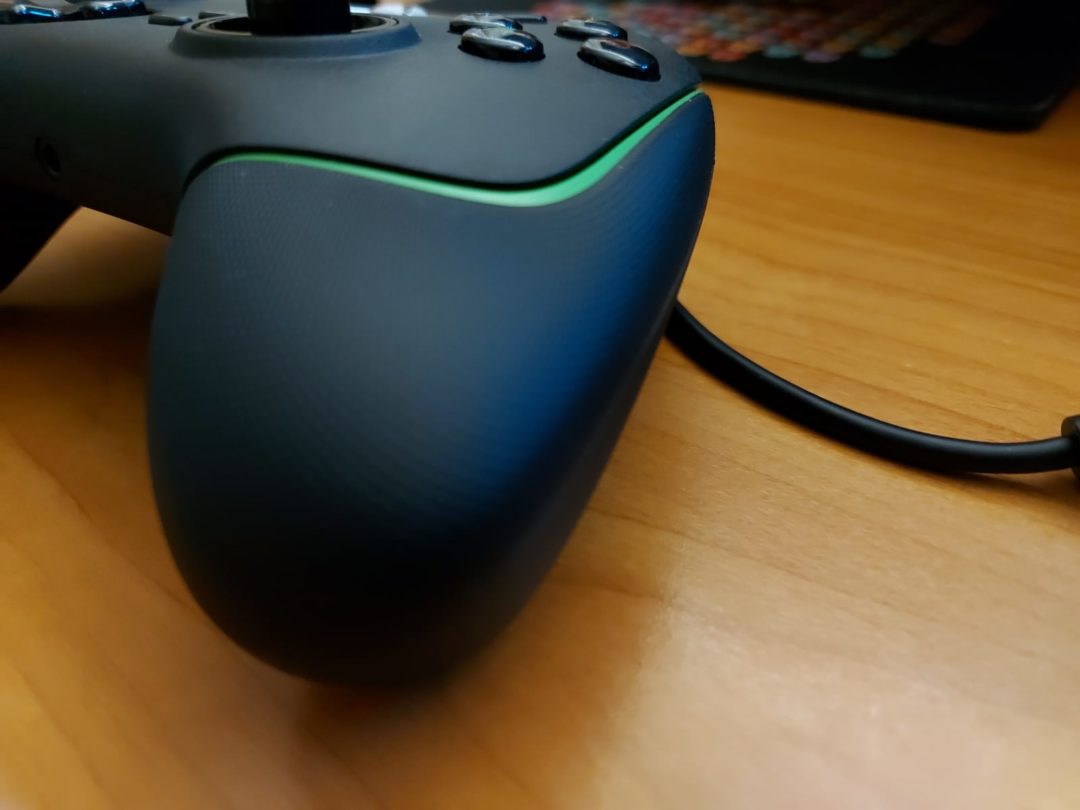 The mecha-tactile feedback is extremely pleasant. It denotes precision and durability, but my dwarfs on the brain were a bit shaken by a certain “game” of sticks and triggers. Don’t get me wrong, they work flawlessly, but on top of that, I wish my actions were a little heavier, so that I wouldn’t live with the impression that I would stick with the sticks in the air if I shoot them more aggressively. I know that for many, their lightness is vital for accuracy in various games, especially in multiplayer, but this can be solved in the special application for Wolverine V2.

In any case, I’m pleasantly surprised, in the sense that the Razer Wolverine V2 is the first controller I’ve rubbed for hours without slipping / sweating my hands, preferring to use it even in games that seriously require a mouse approach. & keyboard.

Being optimized for Windows 10, Wolverine V2 connects very easily via USB, there are chances that Razer Controller Setup will be installed directly, without downloading it from the Microsoft Store.

The program is easy to use and allows a wide customization of all the buttons on Wolverine V2. You can make a complete remap, which makes excessive use of the two additional buttons, but you can also set the sensitivity of your sticks and triggers for different games, be they shooters or fighting. Personally, I didn’t need any software, but I enjoyed the shortcut offered by the Xbox home button. Once you press it in-game, an overlay opens that gives you access to many interesting functions. You can quickly set the sounds, input and output of the microphone. In addition, the interface also monitors your FPS, temperature and processor usage, while you can enable the streaming function optimized for Windows Gaming.

Speaking of the microphone, the Razer Wolverine V2 also incorporates a 3.5 mm audio jack, which I used with pleasure. Everything works as it should, because you have everything at the muzzle of the horse. The wired headphones don’t hang on to you anymore because you connected them to a jack placed over the sea and hard, and you can play quietly.

Wolverine V2 has a cable with a sufficient length – 3 meters. In fact, it is very long, which can be either advantageous or disadvantageous. Fortunately, the length can be managed very easily, without waking up that you have made a string out of the wire. It is strange to note that the wire is “divided” into two halves that connect through a port that reminds me of the PS / 2 peripherals from the time of the ancestors. What is its purpose on this controller? I will never know.

For a wired controller, however, Wolverine V2 is quite expensive. This is given that even an official Xbox wireless controller is a bit cheaper. Okay, we already know that Razer offers expensive products, but it can be a little disappointing to come across a wired third-party Xbox controller, which is more expensive than the wireless one, even officially. The quality of the construction and the multiple functions that this controller enjoys could be some serious arguments. Otherwise, I can’t explain this price for a wired gaming controller.

Wolverine V2 from Razer is an interesting and robust controller. It looks good, moves well, feels good and gives you the opportunity to customize it to your liking. For a wired controller, the price is a bit high , but the quality of construction, attention to detail and the fact that we are talking about Razer peripherals are some solid reasons. At the end of the day, as soon as I have spread these thoughts in the online environment, I will resume my gaming session with the little help, because I was very stained on it.

Philips 243B1JH monitor is equipped with a user presence sensor