When creating the headphones, the developers of the company clearly set themselves the task of making them as miniature and invisible as possible. This was reflected not only in the fact that the weight of the earbuds themselves is practically not felt in the ears or even when weighed them in the palm of the hand, but also in the design of the carrying case. This is the first case that not only fits completely in the front pocket of my jeans, but also inside my clenched fist! Its shape is optimized in such a way that there is not a millimeter of extra space inside, and so that the headphones can fit in the case, it has niches not only in the box, but also in the lid. Despite its compactness, the case has a built-in 410 mAh battery at its disposal, which, together with the 35 mAh batteries installed in the headphones, allows the user to listen to music and communicate on the phone for 18 hours. A full charge of the headphones themselves is enough for 4 hours of battery life. A USB-C port is provided for charging, it will take 85 minutes to fully fill the case and earbud batteries. The headphones themselves have everything you need to work with any smartphones – the built-in Bluetooth 5.0 module with support for AAC and SBC codecs provides instant pairing and reliable reception at a distance of up to 10 meters.

The acoustic part is built on a dynamic driver, large for this class of technology, equipped with a 13.4 mm diaphragm. This should be enough to get good bass, even taking into account the fact that the model is not in-ear and is held in the auricle not due to the deep immersion of the nozzle into the ear canal, but due to its ergonomic anatomical shape. 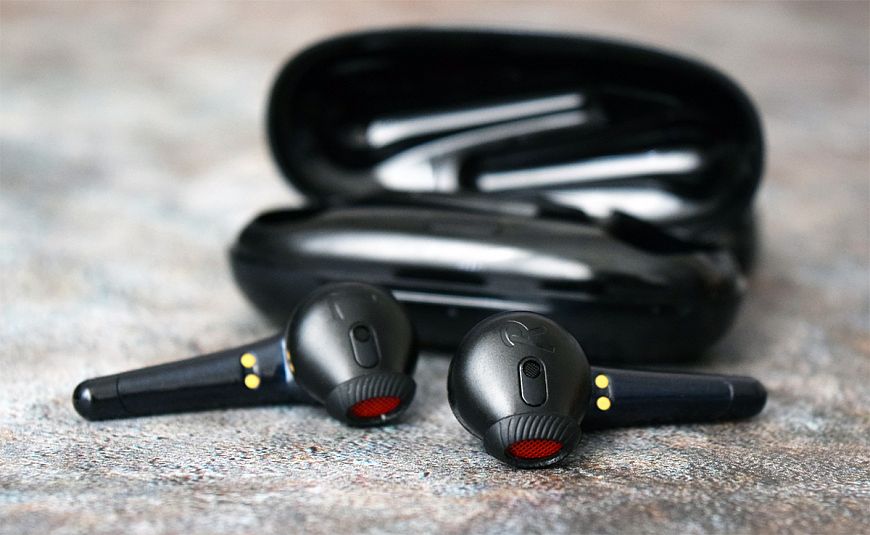 1MORE ComfoBuds True Wireless come with a single pair of non-removable ear pads, which is a natural fit given their design. The exit from the nozzle is closed with a perforated red plate, which serves not only to protect the speaker from moisture and dust getting inside, but also plays the role of a phase array. By the way, the protection of the cases of the model corresponds to the IPX5 standard, which allows you not to be afraid of water getting on them. To improve the sound quality when communicating on the phone, each earbud is equipped with two microphones, which allow the electronic noise canceling system to cut out external noise and at the same time amplify the sound of your voice. The weight of one 1MORE ComfoBuds True Wireless earbud is only 3.8 grams, the weight of the carrying case is 28.9 grams.

In strict accordance with the manufacturer’s promises, pairing with any smartphone occurs instantly, and in the future, to start listening, you just need to take one earphone out of the case – the music starts playing in a few seconds. During testing, several signal sources were used, which were smartphones Samsung Galaxy Note 10 and Apple iPhone XR, a Dell laptop plus a portable Hi-Res player Astell & Kern A & Futura SE100. The musical material included traditional test tracks in a wide variety of resolutions up to 24 bit / 96 kHz, as well as broadcasts from the Deezer and Tidal music services.

After listening to several tracks, it became obvious to me that the name ComfoBuds refers not only to the comfort of the fit – and the model has it almost flawless, you stop noticing the presence of earbuds in your ear after a couple of minutes – but also to adjusting the sound signature of the headphones. The sound from 1MORE ComfoBuds True Wireless is really quite comfortable and well balanced. Small flaws in HF, caused by the transmission of a signal via Bluetooth and manifested in any wireless headphones, appear only at a volume close to maximum, and even then not so much as to interfere with the enjoyment of music. We got the best sound when paired with a smartphone from Apple, moreover, with it, the headphones even support pause and start playback by pressing the outer side of the case, although this possibility is not announced by the manufacturer. The pause function when removing the headphones from the ear works flawlessly with any signal sources. 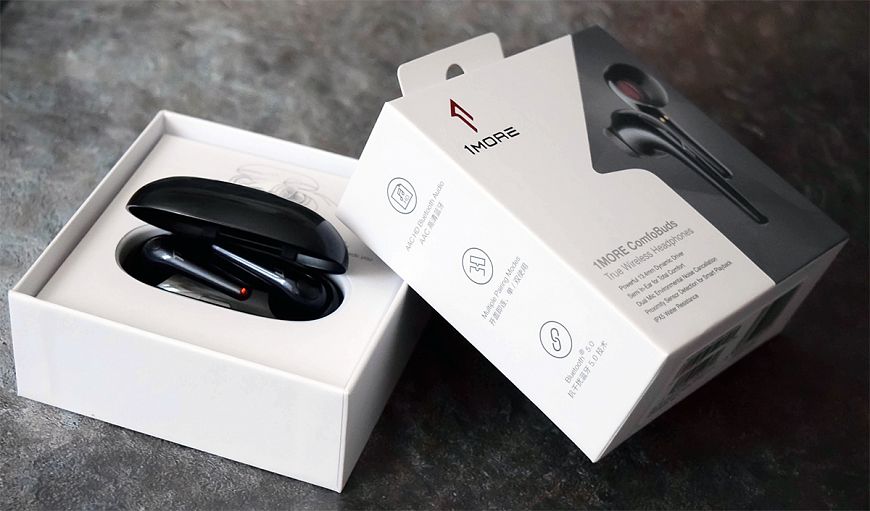 Returning to the sound quality, I would like to note the correct bass setting – on the one hand, it never comes to the fore, on the other hand, it is always perceived as weighty and distinct, even on low-frequency recordings of the 1980s that are stingy. It is not for nothing that the famous musician and sound engineer Luca Bignardi, who was awarded four Grammy awards for his work, took part in the creation of the headphones – the hand of a professional is immediately felt.

The volume reserve of 1MORE ComfoBuds True Wireless is quite sufficient for listening in a moderately noisy environment, although you shouldn’t demand the impossible from them, of course. In general, taking into account the extremely affordable price, the headphones turned out to be just great.