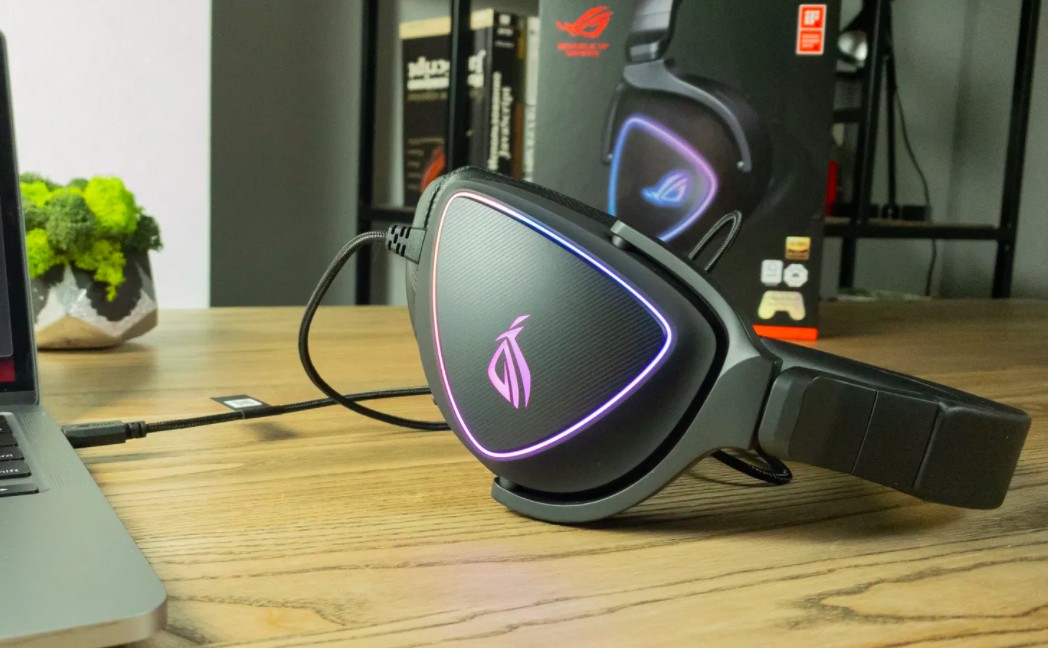 Two years ago, we met with a very good gaming headset ASUS ROG Delta. Now it’s time to talk about its new version, which received the prefix “S”. Outwardly, these are almost identical models. But, the main differences are inside and the main thing is the hardware support for the MQA audio codec, designed to give its listeners exactly the sound that the artist intended. Let’s see how ASUS came up with such an idea in a headset format for gamers.

The headset comes with a pair of interchangeable breathable ear pads, a detachable microphone, a USB Type-C to USB Type-A adapter, and a set of documentation.

If you’ve seen the ASUS ROG Delta before, the “S” version will seem very familiar to you. There are few changes – the plastic attachments of the bowls to the headband became black instead of silver, and a button for switching backlight modes appeared on the left bowl. That’s all.

For those who were not familiar with the original version, let us recall what the ASUS ROG Delta S is like. These are large, full-size headphones with triangular cups. Despite its large size, the ASUS ROG Delta S does not feel heavy and is not. Their weight is only 300 grams.

The bowls are adorned with RGB lighting along the contour, its style can be synchronized with other ASUS devices, if you have one using the Aura driver.

The headphones turned out to be very comfortable. Their soft ear cushions do not crush or create any discomfort. The headband is also not very narrow. Bowls rotate for added convenience.

On the left cup there are additional controls – volume control and a sliding switch for backlighting modes and off.

A pair of 50mm drivers and an ESS 9812 DAC built into the headphones are responsible for good sound in ASUS ROG Delta S. The sampling frequency ranges from 40 Hz to 40 kHz. I’ll talk about MQA support a little later, but for now we’ll talk about how the headphones behave in games and ordinary music.

The sound is very balanced. No bloated, excessive low frequencies and good detail and scene width. In games, you get a powerful sound of special effects, and in music, you get very clear sound with a well-developed top.

Now let’s talk a little about what MQA is. The MQA, or “Master Quality Authenticated” codec was developed by Meridian Labs as an attempt to convey the sound to the listener exactly as the artist intended. After all, even in Lossless, the sound is processed when saved in a certain format. Basically, the sound in MQA is the sound obtained from the master copy, which is recorded in the studio. MQA can be recorded in FLAC or ALAC, but its decoding requires support not only from software, but also hardware.

So, the hardware decoder is already built into ASUS ROD Delta S. There is not so much content on the network in MQA and its main source can be called the streaming service Tidal, which, by the way, is not yet represented in Ukraine, but is formally available via VPN.

Having listened to several albums in MQA, I heard a difference even with FLAC, but I can’t say that it was noticeable everywhere, I always liked it very much. Yes, you can hear a little more detail in the sound. The analogy with vinyl comes to mind, where you can hear a lot of additional things. But this does not make MQA warm and tube-like, and its support in a gaming headset is not entirely clear. Yes, there is such a possibility, now there is no need to buy expensive separate decoders for this.

There is nothing special to tell about the microphone in ASUS ROG Delta S with all the desire. He’s good, but nothing more. There is no active noise cancellation system in it. Interestingly – a separate key to disable it too.

ASUS ROG Delta S is still one of the highest quality gaming headsets, now with a clearly audiophile bias. It is unlikely that support for MQA will be so in demand, because since its introduction in 2014, it cannot be said that this standard has been unequivocally adopted by the recording industry. But, nevertheless, there is now a relatively inexpensive device on the market in a convenient form factor. But, ROG Delta S is worth buying not only because of the support for this codec, but also due to its good sound in principle and a convenient design.