Audeze Sine DX Review: A world of their own The Audeze Sine DX is a planar magnetic on-ear headphone that is an open version of the well-known closed model Sine. Stereo phones provide a wider and deeper soundstage with a clear separation of musical images in space, guarantee linear frequency response and long hours of listening without fatigue.

The headphones have a high sensitivity, wide frequency range and low impedance, so they can be used in tandem with portable devices, including smartphones, tablets and Hi-Res-players. 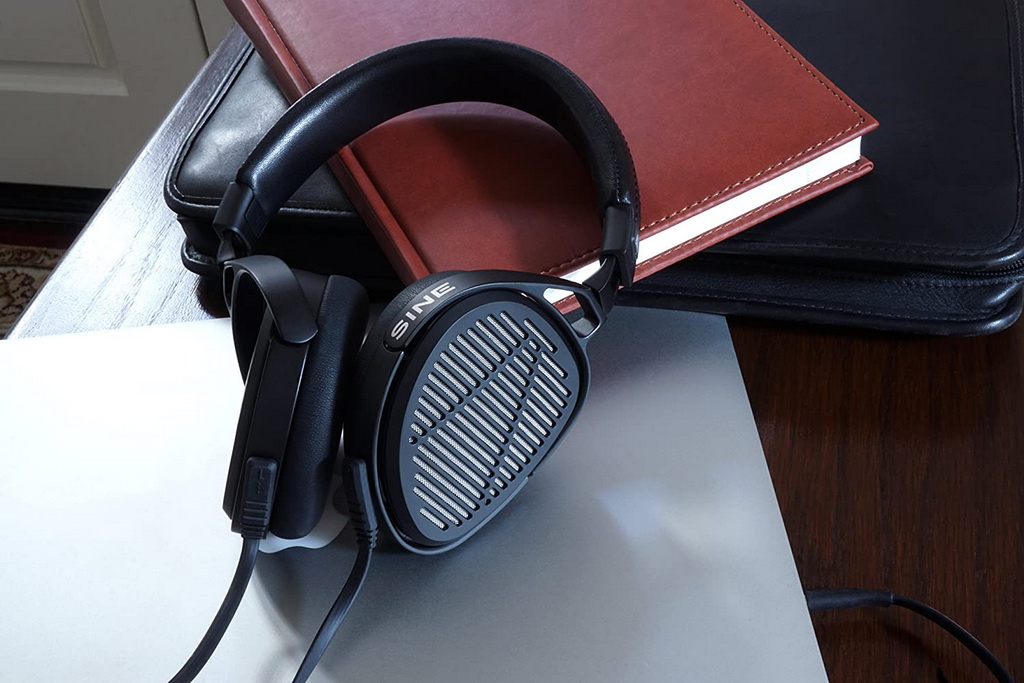 The model sports a stylish, modern industrial design with an asymmetric cup, developed by Designworks (A BMW Group Company) of California. The Audeze Sine DX headphones have a lightweight, durable aluminum frame. The cups can be rotated at an angle of ninety degrees in different planes, which makes it easier to transport the model. Easily removable ear pads and headband are covered with natural leather, and their soft high-quality filling guarantees a sufficiently high level of comfort.

Audeze Sine DX emitters use a large ultra-thin film membrane, on which, in accordance with the Uniforce technology, conductive paths are carefully applied, i.e. the membrane acts as a voice coil at the same time, while ensuring minimal distortion.

According to the company, the thickness of such a diaphragm is comparable to that of a human hair. The result is excellent transient response, ultra-fast response, high resolution and an impressive 3D sound image. Powerful Fluxor neodymium systems are used as magnets, and the Fazor technology used in the Audeze Sine DX features special acoustic elements that optimize the direction of sound waves inside the cabinet. This makes it possible to get rid of resonances, The model is supplied with a flat detachable double-sided cable. The cable is connected to the cups using special 3.5 mm connectors, which have housings with a slope of thirty degrees and are inserted at an angle, which is very convenient. A 3.5 mm plug is used to connect to the signal source, and the appropriate standard adapter will help to connect the Audeze Sine DX to the usual 6.3 mm jack. A fabric cover is provided for storing and carrying the model.

Produced under the Sine name, the Audeze headphones are a world of their own, radically different from the well-known LCD line. It is under the name Sine and iSine that planar headphones are produced that combine portability, compactness and light weight. Multiplied by proprietary technologies, all these factors cease to be commonplace, and the moderate price for its class further fuels interest. One thing is upsetting: in the Sine series of on-ear headphones, Audeze has only one model left.

On-ear headphones are a rare genre in the category of planars, because to ensure modest dimensions, the design of the emitter must be made as compact as possible, and compactness and large magnetic grilles do not combine very well. However, the developers of Audeze succeeded – and thus the first on-ear headphones of the Sine series were born. These were not just on-ear, but also closed-back headphones that were great for use outside the home. The Sine DX model is already their second incarnation, which differs from the first in its open acoustic design. What happened next, at first glance, seems rather absurd, but it is already an accomplished historical fact: the closed model has ceased to be produced. Considering that the Audeze assortment already consists of 90% open models, it is at least strange to leave the open model in the lightweight form factor, and not the more universal closed model. It is impossible to listen to open headphones on the street, on trips, in the office. Practically nowhere, except in your personal office, hotel room or at home, sitting next to a stereo system. I suppose that the Sine series was primarily of interest to users of older LCD models, as an alternative “on-site” personal Hi-Fi system. And those who are so responsible and serious about listening to music simply do not do it in an inappropriate environment and therefore choose acoustic design solely based on considerations of its impact on sound quality.

In this context, I propose to consider Sine DX. Like headphones that you can take with you wherever you go and whose sound quality must be taken as seriously as possible – without discounts on form factor and other specific features. After all, if not to enjoy music, then what else can they be useful for?

A unique feature of the Sine headphones is the D-shaped diaphragm. If we were talking about a dynamic emitter, such a shape would be absurd and completely meaningless, but planars with a smaller power stroke and a voice coil distributed over the entire surface of the diaphragm, in principle, can have any shape. In this case, the contour, similar to an elongated letter D, fits perfectly into the design of the cups and allows them to make the most of their area. The cups, in turn, repeat the shape of the auricle. 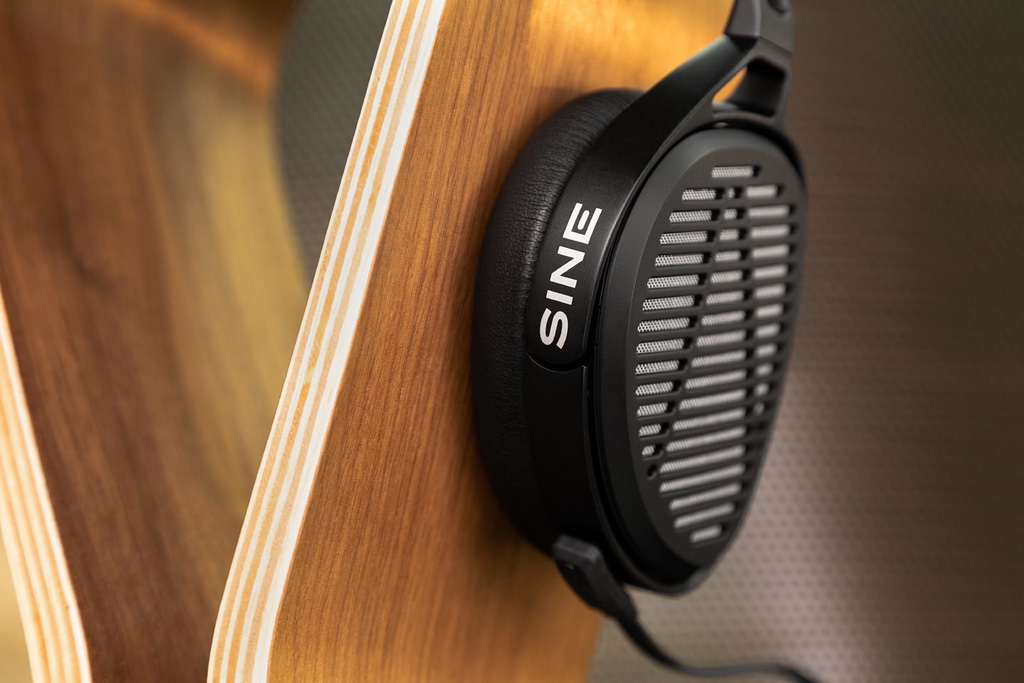 Experiments with the shape and size reduction of the diaphragm to 80×70 mm (relative to the 106-mm caliber of the LCD series) did not prevent the developers from using a full set of proprietary technologies: a special scheme for distributing Uniforce conductive tracks, evenly distributing the EMF over the entire working surface, matrices of powerful neodymium magnets Fluxor, providing the most uniform and strong magnetic field, Fazor phase equalizing elements, which normalize air movement and minimize distortion.

Audeze Sine DX look favorably against the background of the older LCD line with its titanic dimensions. Even the lightest LCD-GX can hardly be called transportable, and the branded plastic case, although it can survive the most extreme trip, is more suitable for moving than for regular travel. In spite of them, the Sine DX are super compact with no discounts on the design of the emitters. The ability to rotate the ear cups 90 ° in the plane of the headband makes it easy to put the headphones even in a thin laptop bag or case with office papers, not to mention the fact that they can simply be put in a pocket or carried around your neck without any discomfort. 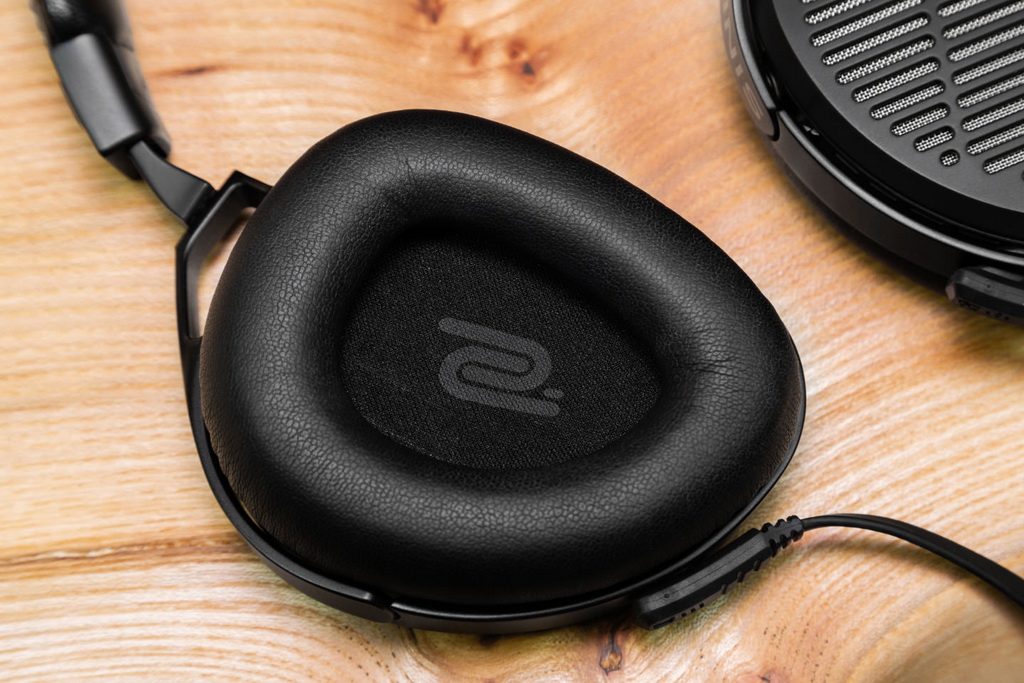 The feeling of lightness is emphasized by the design. Open grilles with a signature A-shaped silhouette and a spatial headband frame complement the weightlessness of the Sine DX design, while the black color of all elements with a perfectly stitched leather headband adds solidity and high cost to the appearance. Wearing these headphones is not a shame to get into the salon of the most luxurious BMW roadster or to be at a party somewhere in Monte Carlo. Although it is unlikely that audiophile headphones will come into play there.

Visually, the headphones are excellent, tactilely they do not disappoint either: soft skin, cool metal and … a pleasant weight in the hands. Whatever one may say, but a pair of planar emitters is hard, so the headphones gained almost 300 grams of live weight, which is not so little for an overhead model. Landing is another surprise. Sine DX behave unexpectedly familiar. Having tried these headphones for the first time, I felt like a character in the “Alien” franchise, imprudently looking into the opened egg – the headphones on my head were so thoroughly and businesslike. And the funniest thing: wearing the Sine DX, you can shake your head as much as you like and even roll on the floor (if you suddenly have such a desire) – they hold perfectly and, with the most active movements, do not move from their homes. At the same time, it must be admitted that the design is maximally ergonomic and well thought out. The ear cushions are comfortable both to the touch and in terms of the degree of softness, their shape follows the contour of the auricle, and the combination of these qualities with a large number of degrees of freedom for attaching the earcups ensures the most even distribution of the pressing force. It would be enough not to modify one of the above points – and wearing headphones would turn into torture, but the Sine DX show themselves flawlessly in this matter, providing the very feeling of comfort and weightlessness.

And here I would put the Sine DX models a solid top five for ergonomics, but the hand once again clings to the cable. This is a surprisingly rigid and massive conductor with an impressive cross-section, and at room temperature it behaves like some in the cold – it perfectly keeps its shape. If you, like me, don’t like this, try to find an alternative and be sure to tell us about the search results in the comments. I have so far managed to find a couple of dubious-looking homemade products. Doubtful – because the wire comes out of the connectors of the cups at an acute angle, and the use of standard connectors in custom cables will certainly doom the conductive cores to extreme kink and sudden breakage. As for the standard cable, its molded connectors ensure the cable is held in the optimal position and look more than reliable. In addition, a definite plus is that it does not give a microphone effect when you touch your clothes. This is due in part to the sheath material and in part to the connector design. Viewing the Audeze Sine DX as a compact alternative to older models is a surefire way to understand the strengths of these headphones. They can be safely connected to the best sources and amplifiers that are only at hand and be sure of excellent results.

In the case of Sine DX, compactness does not determine applicability in any conditions, but elementary transportability – and this can be considered a sufficient reason for the existence of this model.

In addition, the developers did everything so that the not the most convenient form factor did not become a problem with prolonged use. Well, the low impedance and modest requirements for the power of the amplifier are quite a killer argument.