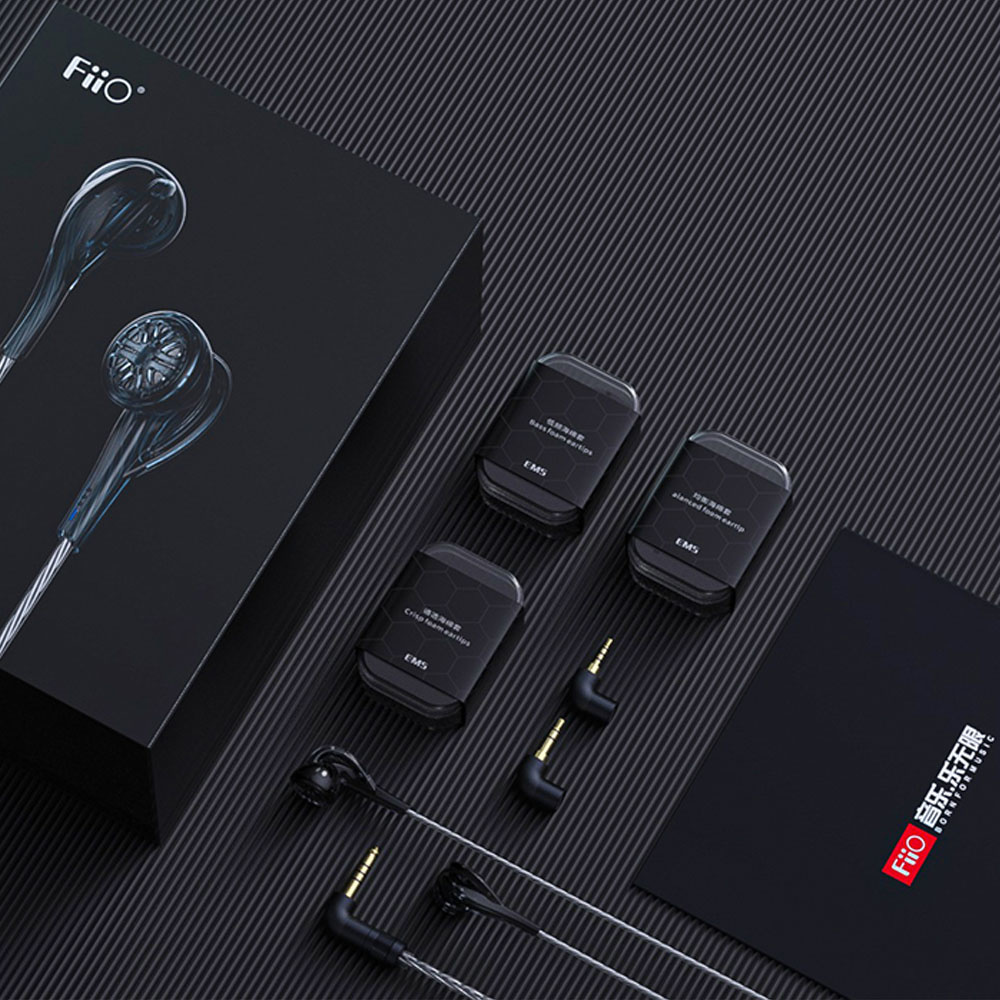 Open fit headphones once dominated the portable audio market, as they were the only choice in small indoors until the appearance and rapid growth of in-ear monitors almost wiped them out.

And we say almost because there has always been a small limited audience that continued to prefer them because of their unique ability not to penetrate deep into the ear canal, a movement that is required when using iem and many can not tolerate even a minute.

Among some companies that have continued to build open fit is FiiO which has always had a usually cheap model on its catalog.

And suddenly in the year 2020 it decided that the users of open fit have the right to the audiophile sound and so after thorough research and testing the EM5 was released.

The modern and luxurious EM5 of FiiO has inside a large dynamic unit with a diameter of 14.2mm that has a beryllium-coated diaphragm which is very light and at the same time very hard.

These properties in combination with the special construction of the diaphragm with the method of long travel ensure that the sound that reaches our ears is linear, compact and without distortion.

The usual disadvantages of ear buds are the inadequate response to the low and FiiO in order to deal with this problem and amplify the bass uses a special design innovation of its own.

The construction of the EM5 thanks to the method of 3D printing allows the creation inside a long narrow audio tube – something like the bass reflex of the speakers – that amplifies the low frequencies.

The EM5 cable is a stable choice of FiiO since the shape of the EM5 is such that a removable cable would prevent its proper and anatomical fit which in addition to comfort is essential for proper sound performance.

FiiO for the EM5 cable selected the best materials and used high purity silver in a Litz braid ending in a removable screw connector with three different 2.5mm, 3.5mm and 4.4mm terminals available to cover all usage scenarios.

A cable of truly unique quality that we would definitely like to see in the future on all mid-range FiiO headphones and up.

FiiO suggests for better sound quality the use of the EM5 to be done with the specially provided foam sponges which take care of the fine tuning and for this it supplies us with three different designs.

One for balanced sound, one for bass boost and one for the six-piece treble for each item in its own separate plastic box.

Finally in the package we will also find a luxury hard storage box lined with synthetic leather and the FiiO logo engraved on the lid.

The EM5 cable with the removable screw plug made it very easy and gave us the opportunity to listen to it with various audio devices with both single ended and balanced connection such as the top and award-winning by EISA FiiO M11PRO.

Of course it is not necessary that you will need something so expensive since the EM5 with 32Ω impedance and 109dB sensitivity will play comfortably with whatever you have at your disposal.

We all know that in in-ear headphones the correct application determines the sound performance but especially in the ear buds it is of utmost importance since the slightest movement brings about big changes in the sound.

Provided that the EM5 has been properly applied to our ear then its sound is balanced with a particularly pleasant and natural character that is distinguished for the right sound color and its harmonious richness.

The surprise and the main feature is that it has a real low (and not inflatable medium low) similar to which we have not heard before in any other ear bud and we have heard a lot.

The bass has a very satisfactory range without much cut and has good quality features that make it sound tight, descriptive with enough body and strength.

Of course do not expect subwoofer performance or intense dynamic behavior, do not forget that we are talking about ear bud, but in practice you will enjoy almost all types of music without particularly missing the low.

The middle area – which is the one that is not affected by the application – stands out by stealing the show thanks to the liveliness and the right tone while it sounds a little ahead compared to the other frequencies.

Equally good is the high response with the EM5 having a lot of energy and enough detail with smooth damping without being sharp or annoying.

In the ear buds (open fit) that we lose in passive noise isolation that is practically non-existent we gain it due to their open nature in scene and display.

Here, too, the EM5 really stands out with a sound reminiscent of large open headphones as it delivers the program to a uniquely spacious and holographic scene in which there is precise and proportional placement of the instruments with all the groups being clearly heard even in the fullest musical works.

The supplied foam sponges do the job and slightly differentiate the sound while helping us a lot in the installation.

We will close by emphasizing once again the importance of good implementation since in any other case we will have a loss of low and / or unwanted amplification of high frequencies.

FiiO EM5 are currently the best earbuds on the market.

Finally, after so many years, an almost forgotten species is reborn from its ashes and we have in our hands a top earbuds with audiophile sound that has nothing to envy and many of the corresponding iem category while in some areas it surpasses them very reminiscent of a large headset.

So good news for the loyal friends of ear buds since finally thanks to the EM5 of FiiO you can enjoy their comfortable application without any concession to the sound quality.