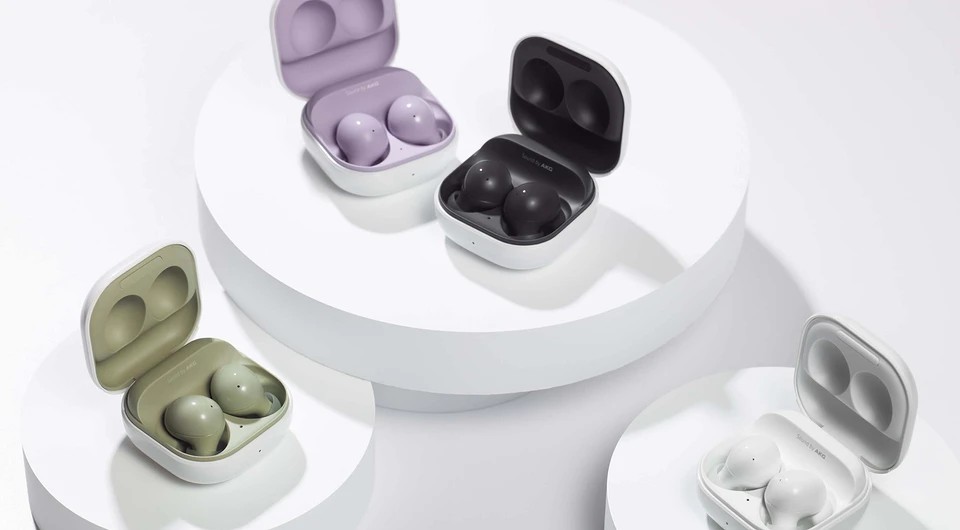 In early 2021, Samsung released the Galaxy Buds Pro headphones – and now, six months later, the Galaxy Buds 2 are presented. The novelty is a little cheaper than the previous model, but not much inferior to it. Let’s figure out how the new headset might surprise you and whether it is worth buying it instead of the Pro version.

It would seem, what else can you think of in the design of TWS headphones . But Samsung managed to surprise us: unlike all previous Galaxy Buds models, the new product received a two-tone case. In all variants, its outer part remains white, while the inner part is colored. Available in 4 colors: black, olive, purple and white. We had a black model on our test, that is, a black and white model.

Inside the case there are magnetic contacts, thanks to which the headphones quickly “fly” into their places for charging. The case itself is square, compact and light: it weighs only 41 g, and with headphones – 51 g. It is also interesting that the Sound by AKG logo is now hidden inside the case, and not on the lid, like in the previous model.

The new Buds2 are vacuum headphones. We believe that this is the most comfortable design in terms of fit: from the additional silicone ear cushions, you can choose the size of the “plugs” for your ear. The headset comes with three pairs of such attachments.

Compared to the previous model, the buds have become smaller and lighter. Also, the headphones are now completely glossy, which in theory should make them more slippery – but during testing we did not have such a problem.

All headphone functions are controlled by the Galaxy Wearable app. On Samsung smartphones, all the necessary plugins and updates are installed automatically, and on models of other brands, you will have to manually download the utility for Buds2. Not very convenient, but this is how manufacturers motivate users to use gadgets of the same ecosystem.

The microphone system is also used in the ambient sound mode. The function works in the opposite way – and as a result, the headphones transmit all the noises around, making them louder. I must say, the Buds2’s sounds are amplified so much that if you accidentally turn on Ambient mode in the subway, you can get scared how noisy there. Although according to the declared characteristics, the amplification is almost twice that of the Buds Pro model.

An internal microphone and bone conduction sensor are also used for clear voice transmission. The headset clearly picks up the vibrations of the voice in order to broadcast it to the interlocutor.

Like the previous model, Buds2 received two-way speakers: tweeter and woofer. Samsung does not specify the exact size of the drivers, but they are definitely smaller than the Pro version. The sound is rich and balanced across the entire frequency spectrum. Note the good bass – very decent given the miniature size of the headphones.

Since the perception of sound is always very individual, the manufacturer leaves the opportunity to adjust it in the equalizer in the Galaxy Wearable app. It also allows you to change the stereo sound parameters by changing the left / right sound balance.

When testing with a Galaxy smartphone, the headphones were automatically connected to it already when the case was opened. They also determine their own position in the ear. This is very convenient: if you take out the earphone, the music will stop.

In the app, you can turn off active noise canceling when using one earbud (usually it is turned off so as not to waste energy). And if you like to play on your smartphone , then the game mode will work with Samsung models, which reduces the delay in audio output.

Despite the fact that the new Buds2 have become more compact, they last a little longer on a single charge than the previous model Buds Pro, especially if you do not use noise reduction. Without ANC, they will last about 7 hours in playback mode at medium volume and up to 29 hours when charged from a case. With shumodav – 5 and 20 hours, respectively.

A full wire charge takes about an hour and a half – you can follow the process of recharging the battery of the case and headphones in the Galaxy Wearable app. The model also supports wireless charging. From Samsung Galaxy flagships, you can charge them simply by placing the case on the back of your smartphone and turning on reverse charging.

The earbuds charge super fast for the first minutes. So, after just 5 minutes at the outlet, the charge will be replenished for a whole hour of music playback without ANC. And 10 minutes of charging is enough for 150 minutes of use.

If you are using a Samsung smartphone, then the Galaxy Buds 2 headphones are a great choice. They last a little longer without ANC than the previous model, and have a more comfortable shape. The novelty differs from the Pro version in that it did not receive protection from water (IPX2 instead of IPX7) and is equipped with more compact speakers. At the same time, the quality of sound and performance remained at a height, and the voice transmission during calls is as clear as that of the “pro” – so you can safely take the Galaxy Buds 2.

Advertisement
X
Subscribe to get the best Tech news and reviews of the week.
By signing up, you agree to our Privacy Notice and European users agree to the data transfer policy.
Close
09/03/2021