For several years in my reviews, I periodically refer to the headphones of the American company Grado . The so-called Grado laboratory, in fact the business of the Grado family for three generations, has been in the audio market for over 65 years. Having succeeded in producing high quality turntable cartridges, the company gradually expanded its product range. And after 1990, the first Grado headphones appeared….

Since the mid-90s of the last century, the manufacture of headphones in wooden cases begins. Grado headphones were marketed as audiophile solutions and very quickly began to gain popularity.

In the future, the company, with a certain frequency, updated the previously created models and expanded its lineup. In an effort to keep up with new technical solutions, Grado began to produce in -ear , wireless and, more recently, TWS headphones .

Compared to many headphone companies, with their approach to packaging, design, materials used, Grado Labs looks like a very conservative enterprise. For example, the entire Prestige series of headphones, like the junior Reference-series Grado RS2e, have the same packaging and configuration. However, after seeing the large box with the Grado RS1e, it became clear that something new had finally appeared. 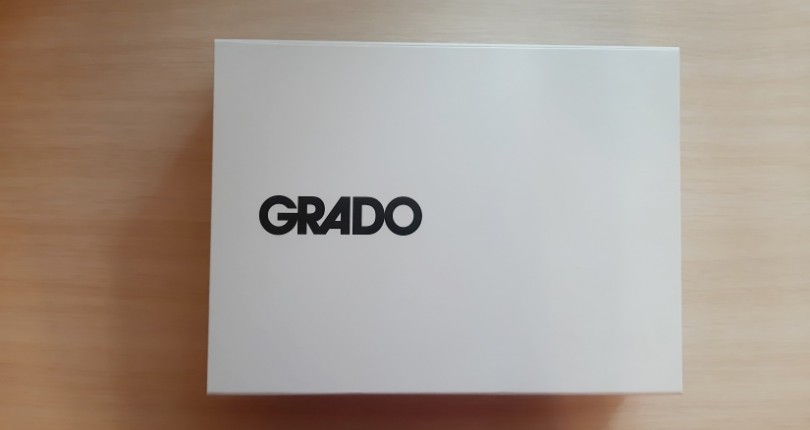 Headphones Grado RS1e are delivered in an impressive package (dimensions 350x265x80 mm) made of very thick cardboard, the end of which has a magnetic latch. The front side of the package is designed in a minimalist style – only the name of the company is printed on a white background. On one of the ends there are technical characteristics of the model.

When the box is opened, its contents are hidden by a thin layer of foam protection, removing which we see the following. Standard cardboard insert information sheet (photo and text) about three generations of the Grado family, producing audio products. The Grado RS1e headphones themselves, which are placed in a thick layer of foam protection and, predictably, a gold-plated adapter from 3.5 to 6.3 mm, put on the headphone cable. On this, the equipment could have ended, as it was in previous models, but not in the case of the Grado RS1e. Whether the price tag has noticeably increased compared to the younger models, or the desire to emphasize the flagship model of the Reference-series, the RS1e set was decided to be expanded with another accessory. It turned out to be not a hard case, not a soft case, and not a replaceable pair of ear pads. Such a complete accessory has become … a headphone extension cord.

Therefore, the headphone cable must first be connected to the adapter (3.5 to 6.3 mm) and then to the extension cord. And if suddenly the sound source does not have a 6.3 mm input? .., again you need to turn to the next adapter (but I think that such a scenario will be extremely rare).

Through the Grado website, in addition to the headphones, you can purchase branded accessories – a hard case or a beautiful wooden case.

The design of the RS1e is broadly similar to that of the other Grado headphones. Unlike the younger models, the Reference series is made using light brown leather and wood. Mahogany is used for the Grado RS1e bowls.

The earbuds themselves look like an expensive, vintage and time-tested item. The wooden bowls are engraved with the Grado Reference Series and the RS1e model number. The right and left channels are marked with letters printed on the black plastic inserts, to which the ear cups are attached using metal rods. As a standard, the headphone cable is not detachable, in the RS1e it is 8-wire and ends with a 3.5 mm gold-plated jack. 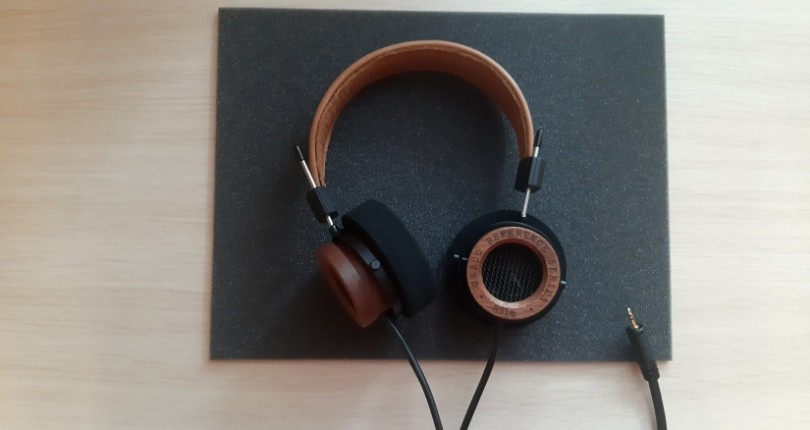 At first glance, both Reference Series RS1e and RS2e look the same. But headphones made with leather and wood cannot be identical. Skin tone, wood color, its pattern will not only distinguish one pair of headphones from another, but small differences can be noticed even in the cups of one pair.

Do not forget that Grado RS1e are made by hand, which also brings a certain variety – the accuracy of the headband sheathing with leather, the thickness of the leather seam and its processing, the quality of polishing of the wooden bowls will differ for different pairs of headphones. And since the number of manual operations is quite high, I have not yet met perfectly executed Grado headphones – there are always minor flaws.

The ergonomics of a particular pair of headphones may differ slightly from another. For example, my test model initially felt good downforce, which weakened slightly after a few days. In theory, the steel headband can be gently extended. From the box there is an unpleasant chemical smell of impregnation of the ear pads, which disappears after a few days. 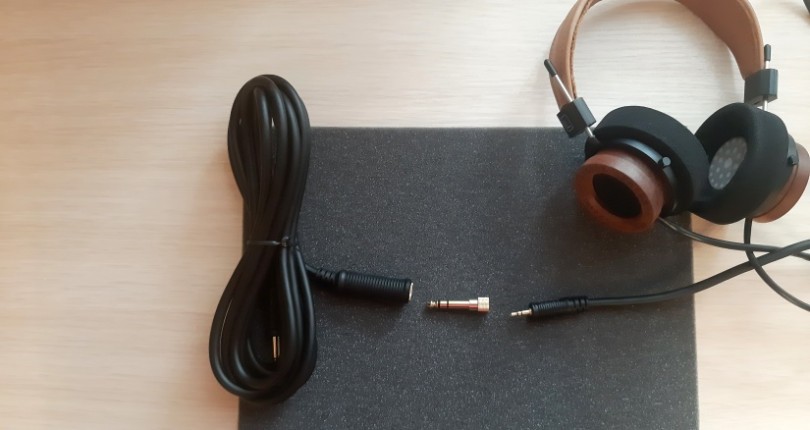 As you know, Grado RS1e in terms of acoustics refers to open headphones . Not only that, these are the most open of all open headphones that I have ever listened to. There is no noise isolation in the headphones, which must be taken into account when listening to music.

If you do not find fault with the production nuances and choose a copy that is comfortable for your fit, then the Grado RS1e are pretty good headphones – tactilely pleasant in materials, relatively light in weight, and due to their design, do not cause overheating during prolonged listening.

Even budget Grado models are able to surprise with the width of their stage, so the flagship of the Reference-series is all right with this indicator. The Grado RS1e offer a very wide stage that has a sense of volume, airiness and clear instrument separation.

The construction of the scene can be conditionally described by a kind of oval, when the width of the scene is greater than its depth. In my opinion, the conditional distance between the listener and the stage is not very large. Headphones from the first notes offer to concentrate on the music. Their sound is very clear and detailed.

Genres such as jazz, instrumental music, including acoustic, vocal, classical music, classical rock and art-rock are simply “prescribed” for Grado headphones. Of course, you can listen to many other musical genres in the Grado RS1e, but the above-mentioned ones are the most interesting for the headphones.

The bass in the headphones is both full-bodied and highly readable. Low frequencies are served moderately, but they are able to go into depth and sometimes add tonal softness, without “mush” and loss of control. The bass has good speed and natural decay. For example, the slap from Marcus Miller is transmitted by headphones with all the necessary punch and impact. As a result, the low frequencies in the Grado RS1e are moderate, have the necessary fullness, they are controllable and detailed.

The mids of Grado headphones are often referred to as “proprietary”. Their main feature is harmonious richness and natural sounding. The midrange plays very richly, emotionally with a decent separation of instruments. The vocals are conveyed richly, cleanly and clearly. On some recordings, vocals, both female and male, have a certain warmth, and they begin to sound chamber and soulful.

The high frequencies of the Grado RS1e demonstrate airiness and length. HFs are able to show brightness, more often moderate, and intensity, while remaining controlled and not drowning out other frequencies. The HF resolution, however, like the MF, is at a level sufficient for those who like to analyze these ranges. At the same time, the headphones deliver high frequencies without a hint of monitor dryness and, most importantly, without forgetting about musicality. More info on Grado RS1e can be found here.

The Grado RS1e headphones differ from other models with their old-school design. In the manufacture of headphones, far from the most modern and technologically advanced materials are used. In production, preference is given to natural leather, wood and metal elements; the presence of plastic is minimal. As an open model, the RS1e showcases an outstanding stage, sound balance, volume and excellent detail.

Returning to the information from the official site, where Grado RS1e are called “point of no return”, “audio masterpiece” and those headphones, hearing which disappears interest in models for the mass market. The statements are quite bold and categorical, but let’s leave it on the conscience of the company’s marketers.

In my humble opinion, the Grado RS1 is still not a universal model, suitable for all genres; headphones have their own characteristic sound “handwriting”. Therefore, RS1e, like some other Grado models, is difficult to recommend for purchase without first listening.

Judging by some reviews, the sound of the Grado RS1e is not suitable for everyone, some consider it too intrusive and a little tiring. In contrast, we can say that Grado RS1e want to saturate the music with a variety of sound colors and their shades, to convey airiness and transparency to the listener.