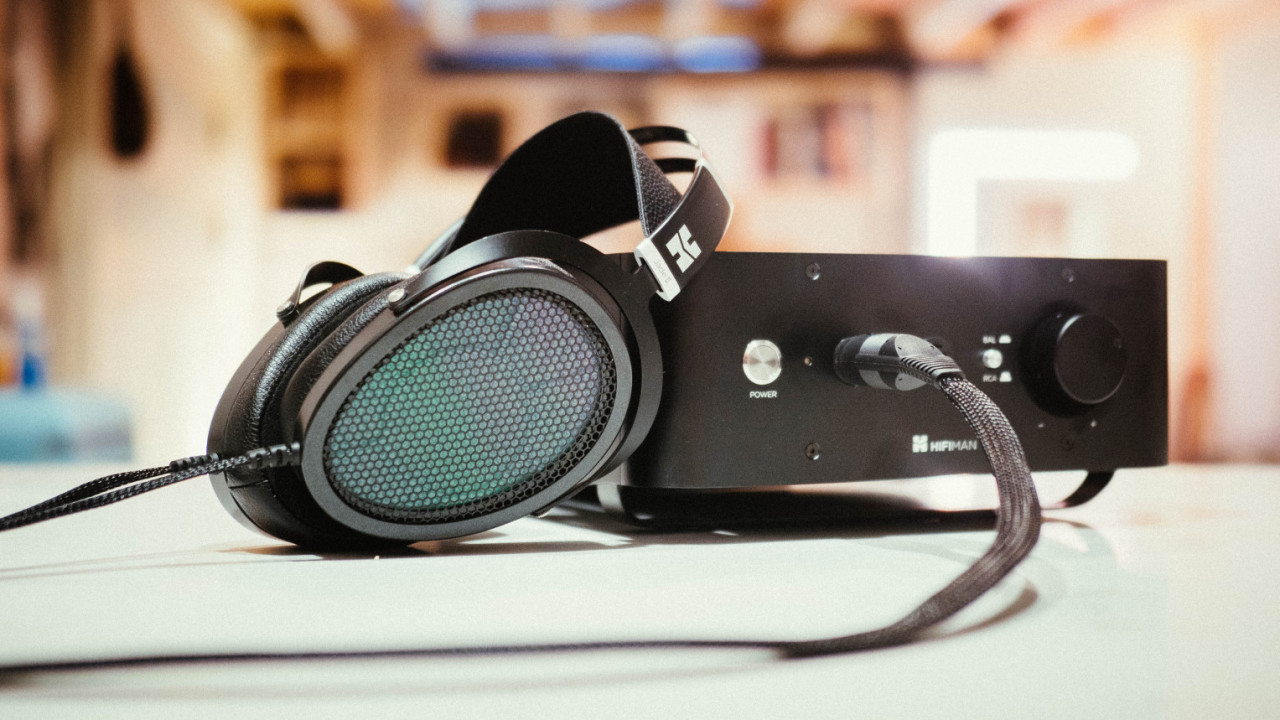 HiFiMan Jade II has two membranes that pulsate without deformations, without delays and without mechanical restrictions.

HiFiMan has three models of electrostatic headphones in its catalog. At the top is the ultimate set named Shangri-la, which combines an OTL amplifier (ie without output transformers) based on 300B three-way lamps.

Next is the Shangi-la Jr model with a hybrid amplifier guided by the 6SN7N lamps and the transistor output. The triad is completed with the electrostatic model Jade II, which we test here, which has a completely transistor amplifier. For the construction of their electrostatic membranes, all three models share the nanotechnology developed for the larger headphones that have now been downloaded to Jade II. 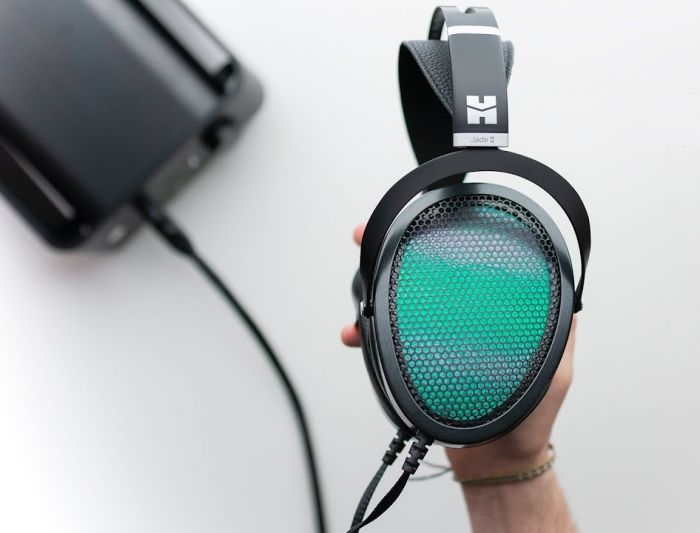 This is the key element that differentiates the new Jade II from the previous Jade, which were the first electrostatic headphones designed by dr. Feng, the founder and owner of HiFiMan. He even designed them before the company even started, in 1997. There are two elements that make up the HiFiMan Jade II: The amplifier and the electrostatic headphones.

These can be used with an amplifier from a different manufacturer and vice versa, as long as we have a polarization voltage from 550V to 650V.

The appearance of the Jade II immediately betrays that it is HiFiMan: a metal pole with a large leather strap at the bottom, open back and a size that completely covers our ears. The amplifier has a very different look.

If we look at it from the front, it appears as a classic design, but its front extends backwards and peripherally embraces the whole device (which is essentially in the form of an elliptical cylinder). There is also a foot that gives the amplifier a slight upward slope, to facilitate the insertion of the five-pole headphone jack.

The weight of the amplifier is 6.5 kg, you do not say it is small. On the front we have the level slider, the input selector (between RCA and XLR) as well as two sockets (five-pole) for headphones. At the back we find two RCA inputs, an XLR pair as well as the socket.

Internally we have two main parts, the power supply and the signal amplifier, there is also a third that houses the sockets and the sliders. The level slider is not a potentiometer, but an encoder that drives a selector with 21 levels of signal attenuation.

The final amplification is completed with two pairs of mosfet, while the power supply is busy to create the polarization voltage of the electrostatic membrane of the headphones that is “held” balanced at about 600V.

The membrane is placed between two transparent stators to which the audio signal is applied to produce the sound. The audible signal is added to the polarization voltage. The stators, depending on the changes in sound, attract or repel the membrane that vibrates the air to produce sound and even a remarkable level.

Therefore the construction of the membrane of electrostatic headphones is a very critical element. The membrane may be a very thin plastic material (eg gelatin) coated with particles capable of being electrostatically charged up to 600V. Yes, but what quality would the sound be?

To solve this problem HiFiMan turned to nanotechnology, creating membranes just 1 μm (or 0.001 mm) thick which are iridescently green in color. The color of the mineral Jade, which in English is called Jade.

The headphone cushions, which are interchangeable, are made of soft synthetic leather that does not show much temperature during use.

They are comfortable and light, while they do not get tired even after hours of listening. The length of the headphone cable is only 2 meters, if you want bigger then you should use an extension from five-pole male to female.

The sound test started after we had put the HiFiMan Jade II amplifier and the headphones in “laying” for about 100 hours, connected to a CD player in the repeat.

Let’s start with the “against”. The length of the cable somewhat restricts the freedom of movement of the listener, who should be close to the amplifier, unless an extension is provided. Ready-made cables with the 3 or 5 meter five-pole plug are commercially available.

Another “cons” of the HiFiMan Jade II is the volume control, which although reliable, is not completely progressive. As a start we chose Dire Straits and the track “You And Your Friend”. The initial “stings” of the guitar strings are fluid and clear, with a high sense of naturalness and tonal balance. 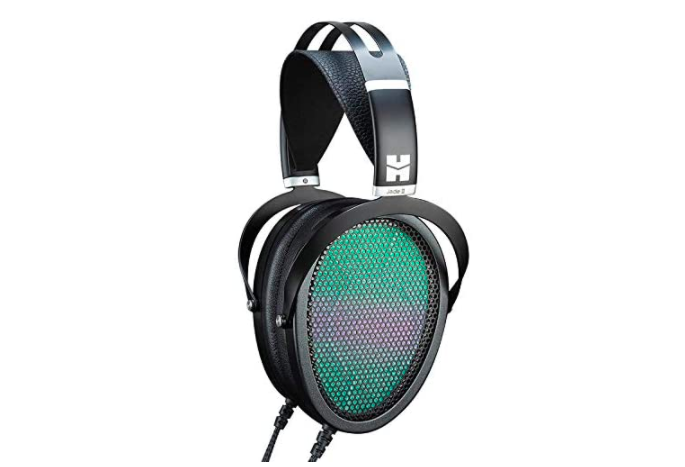 The stage is large and helps to make the audition very realistic and attractive. Mark Knopfler’s voice with HiFiMan Jade II has a “slightly” pure tone compared to the sound of many electrodynamic headphones we have tested, a tone that does not disturb the hearing, on the contrary, makes it pleasant.

HiFiMan Jade II has silky and crystalline highs with an unlimited variety of shades, while their middle ones are clear and transparent, with good articulation and deepening. The low ones are quite deep and stable, but slightly backwards.

Apart from these important considerations, the sound of the HiFiMan Jade II is highly valued for its linearity, which is truly exemplary. The dynamic range it manages to express is great, but we should not increase the volume too much on full bass tracks, otherwise the headphones tend to compress and lose their consistency.

This is an occasion that fortunately does not happen often and occurs only at high volumes with bass. For example, listening to Coldplay song “Trouble In Town” from their latest album “Everyday Life”, Chris Martin’s voice is great, as well as the low range that accompanies the beginning of the song, everything seems to be going very well. and impressively in this fantastic song, but in the third minute where the drums enter and the guitar is released at a frenetic pace, the headphones tend to lose their consistency slightly if we exaggerate with the volume.

Simply, if you do not raise the level too much, the Jade II can easily and comfortably handle even the most demanding parts. However, in classical music these headphones “express” all their potential.

For example, in Richard Strauss’ “Alpine Symphony,” the listener will be fascinated by the ability of the headphones to accurately describe each instrument of the orchestra, reproducing all its grandeur. In other musical choices it was as if we were in the center of the orchestra where each instrument is perfectly defined, something that helped make us feel really involved in the music and the emotions.

After this musical journey that Jade II gave us, a thought came to my mind that electrostatic headphone technology was and will be unsurpassed. Ultimately dreams are electric…

Advertisement
X
Subscribe to get the best Tech news and reviews of the week.
By signing up, you agree to our Privacy Notice and European users agree to the data transfer policy.
Close
11/12/2020