HUAWEI’s headphone lineup is interesting this year. Besides the big HUAWEI Studios, there are the HUAWEI FreeBuds Pro TWS headphones. In addition to powerful noise cancellation and design, there is great sound, support for Bluetooth 5.2, there is even a bone conduction sensor that adjusts the sound to the environment. But the main thing is that they sit comfortably. And in general, there are almost all the top chips of the large model, which we will talk about later.

Very soft and pleasant eco-leather is used here, but the ear pads cannot be removed.

Curiously, these headphones do not have a 3.5 mm audio jack to wire them.

HUAWEI Studio weighs only 260 grams, which is about the same as the Sony WH1000XM4, which weighs 251 grams. Slightly heavier, but at the same time they feel more compact.

Unlike the same Sony – the headphones do not fold. At the same time, HUAWEI came up with a case, but it has a pocket for a wire – a charger. 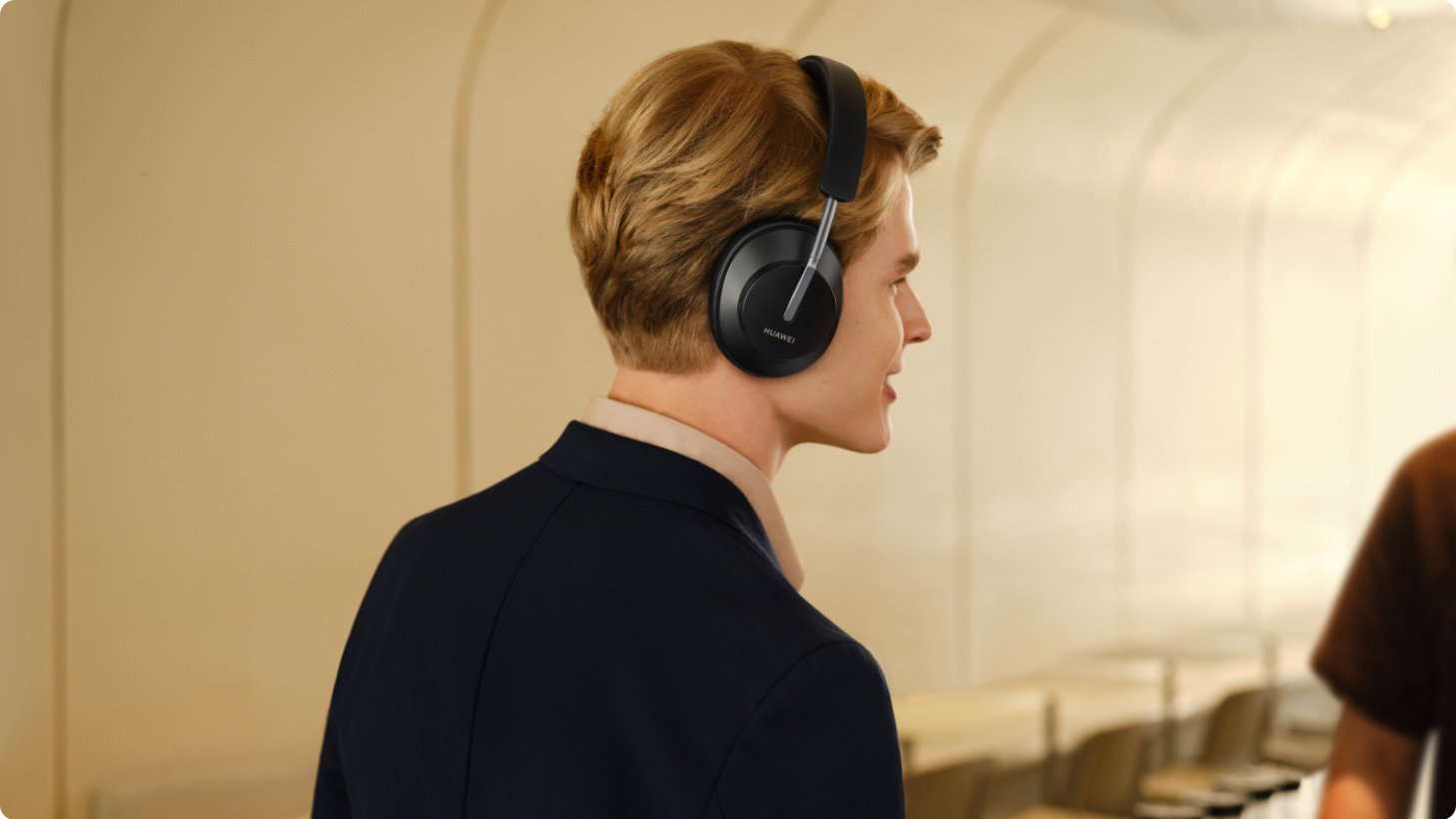 In HUAWEI Studio, four types of noise reduction are announced at once:

The design uses eight microphones at once, four in each cup – one inside and three outside. Everything happens thanks to the Kirin A1 processor, which analyzes the environment 200 times per second. This allows you to automatically change the noise canceling settings depending on the conditions.

There is also the language of Sound Permeation or Transparency: it is interesting that it is not quite the same here as others. Here mids and highs are amplified: that is, speech, beeps on the street – what is really important. And some low-frequency hum will not interfere, it’s cool.

There is also a voice enhancement mode. But so far, it only turns on on HUAWEI smartphones.

Interestingly, the headphones use the Tee Audio Tube architecture, which balances the pressure inside the cups. And really – there is no discomfort when the ears become obstructed, although with large headphones this is a rarity. 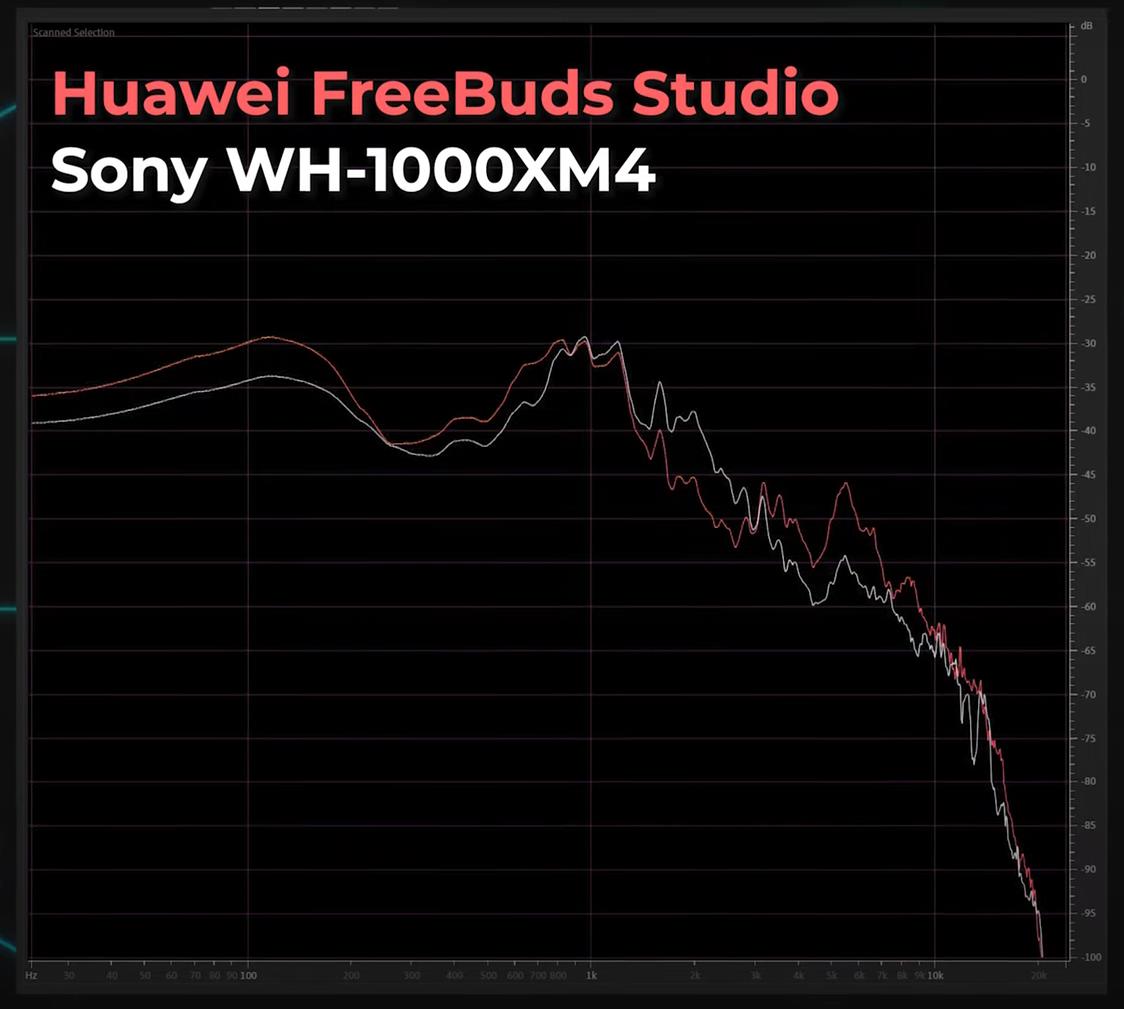 But still, what about the sound? The sound is really good. There is no booming bass like the Sony WH1000XM4, which I like, while the bass is fine. The middle sticks out a little, but it’s all a matter of taste, perhaps.

The drivers use a four-layer diaphragm.

What’s more important to say is that the L2HC codec is used when connected to HUAWEI. What it is? It is HUAWEI’s own codec and is similar in performance to LDAC. It can reproduce sound in the range from 320 kilobits per second to 960 kilobits per second. The rest of the devices are connected using the usual: AAC or SBC. And by the way, when you switch, you can hear the difference: AAC seems to compress the mids more tightly, everything becomes overcooked.

By the way, there is Bluetooth 5.2 inside and a double antenna so as not to lose the signal. But the main! It supports simultaneous connection to two devices, which can be very good and useful … You can connect to a laptop and a smartphone. And since we are talking about different devices, we must remember another HUAWEI model – FreeeBuds Pro.

There is a design here: a matte case that even looks like metal and strange square headphones that look distinctive.

To control, you need to click on the headphones. A long press toggles the noise canceling modes, and to control the volume, you need to swipe up or down. They also connect to two devices.

There is also support for wireless charging. 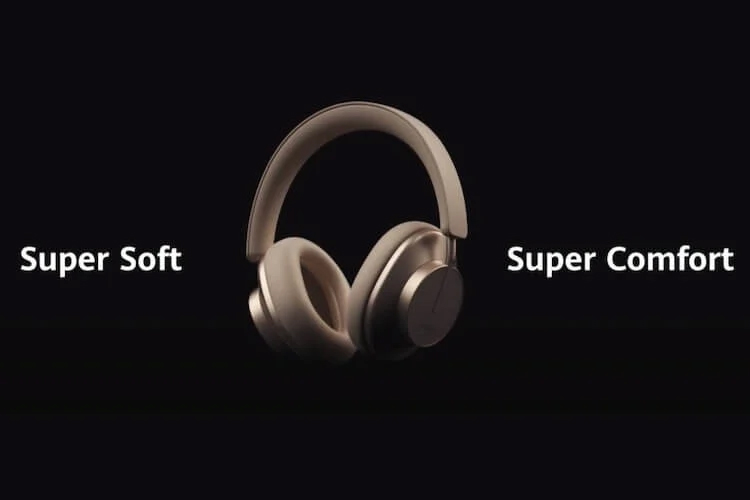 There is overload and everything may sound a little harsh, but everything is audible. There are three buttons for control in the headphones: ANC – responsible for noise cancellation, a power button and a Bluetooth key. She is not a fact that she is needed. Simply because it is needed only for pairing devices and is used well several times maximum.

The rest – gestures and they have already become familiar: double tap – Play / Pause, swipes to switch tracks and volume, long press – for the assistant.

However, it is strange that there is an arc in the middle of the gesture surface. Sometimes he gets confused, it is not clear where in the end to lead or knock, but in the end it works everywhere.

Reacts quickly to the switch gesture. Faster than Sony.

Auto-pause is not just when you take off your headphones, but when you raise or move one of the cups. There is also a long press to call the assistant.

As we said above, there is no proprietary application. There is AI Life, but it doesn’t work with this model. However, there is not much to set up.

HUAWEI claims 24 hours of operation and 20 hours of noise canceling.

Headphones are charged via USB Type-C.

The HUAWEI Studio headphones are good, but they are not without drawbacks.

First, they don’t add up. Secondly, there is no LDAC codec that has become popular, but there is its own proprietary one. In addition, there is no app yet and all the features can only be experienced with HUAWEI devices. There is also no wire here, but now it is not entirely clear – is it necessary?

Otherwise, there is excellent sound, good noise cancellation, which also works for calls. The earbuds are also very compact and lightweight, which is definitely a plus.