The wood of the bodies gives the sound of musical instruments their characteristic features. And what happens to the sound if this material is used in the manufacture of headphones? It will be at least interesting, as we have seen again by testing the in-ear model with some elements made of wood.

Wood as a material for the manufacture of acoustic systems constantly attracts the attention of their developers, and this is not surprising given the fact that from time immemorial musical instruments have been made from it. And we, the listeners, during this time managed to fall in love and accept as canon precisely those timbres that are introduced into each note thanks to the resonances of their bodies. But in the speakers, such phenomena are undesirable, since their task is the authenticity of the reproduction of the music recording, gag is not welcome here. However, we see examples of wood – really, not made of MDF, chipboard or plywood and finished with natural veneer – speaker enclosures and even speaker cones, in the latter just JVC is strong. According to their creators, they give the sound additional naturalness and harmony.

Wood is also used in covering headphones, making beautiful cups out of them. But JVC continues the tradition of its “wooden” emitters not only in models of this type, but also in inserts. JVC HA-FW01 is one of them.

It is based on 11mm speakers with a wooden dome. Wood has special properties: the speed of sound propagation along the fibers is much higher than across them; damping also depends on the direction of propagation. Therefore, a membrane made of it is less prone to resonances, but it must be very thin. For the manufacture of such parts, JVC has developed a special installation, and the thickness of the resulting diffusers is only 50 microns.

The HA-FW01 also uses other wood elements: the outer shell of the cabinet, a stabilizer positioned to optimize backward scattering behind the speaker, and a plate placed over the neodymium magnet system to damp it. These parts are made from the thinnest layers of specially made wood, which are pressed, being superimposed on each other at certain angles.

In addition to wood, the HA-FW01 also uses stainless steel, brass – in particular, the base of the case is made of it – and aluminum. Such a “metal harmonizer”, according to the idea of ​​the developers, should help to reduce vibrations of the component parts of the earbud and thereby ensure the purity of the sound.

Another notable design element is the acoustic cleaner. It is located directly in front of the tube, through which the sound is output to the outside, and provides scattering as well as attenuation of that part of the waves that “pollute” the music signal.

All these parts are tiny – their design and manufacture require special care, as well as the use of high-precision equipment, so many of them are made in Japan itself (as mentioned on the website). And judging by the packaging of the tested sample, it is all Made in Japan.

Despite the hefty size for earbuds, JVC HA-FW01 is easy to install in your ears, hold firmly and does not create a feeling of annoying foreignness. This is the result of special research with the involvement of many users, which allowed to create a balanced and comfortable configuration of the model, as well as to select materials that are pleasant to the touch.

The set includes five pairs of tips of different sizes, they use the proprietary Spiral Dot technology: on the part that leads from the sound guide of the earmould to the ear canal, there are spiral recesses that scatter acoustic waves reflected on the wall. Two more pairs are made of memory foam material

The JVC USA website contains excerpts from an interview with Kimihiko Kitaiva, one of the company’s developers, where he provides a message to users and shares information on discussions about what character should be given to the sound of headphones, choosing between tonal balance and expressiveness. In addition, the engineering team strove to provide him with individual characteristics. As a result, the HA-FW01 has an emphasis on mid-bass; at the same time, such properties as detail, dynamics, energy and elaboration are also fully inherent in them. He advised to evaluate the sound of the model when playing records of large orchestras in order to pay tribute to the scale and three-dimensionality of the music scene.

Therefore, we felt that it is worth starting auditioning with “Journey through the Orchestra for Youth”B. Britten. This educational piece begins with a cheerful roll call of mid-frequency instruments – flutes and violins. They chirp sweetly on a spacious stage, their voices are detailed and rich. Then other instruments are gradually added to them and in every way they re-sing the theme from Purcell. The introduction of cellos and especially double basses is quite noticeable: thick, voluminous low frequencies draw attention to the right side of the stage, but the integrity of the picture does not suffer from this. And when it comes to the big drum, the beats just vibrate your head. These headphones are also favored by the largest brass, making their parts more noticeable. But the rest of the members of the orchestra do not get lost in this host, including graceful harps and sonorous, crumbly percussion. In the final fugue, they all merge into a powerful,

With JVC HA-FW01, B. Britten’s Four Sea Interludes are expressively performed in a new way . In the Moonlight suite, the richer bass of cellos and double basses conjures up an endless but somewhat frightening picture of the water surface in the night, scattering moonlight, which is acoustically transmitted by percussion, flutes and other small-caliber brass. The next Storm is delivered very expressively – powerfully, swiftly – and the weighty, elastic beats of the drums through the head pass through the entire body. Impressive.

The headphones are remarkably good at transferring vocals, for example, by A. Netrebko from the Semper Libera album . It is full, voluminous, superbly articulated and expressive; sonorous, but lukewarm. And the orchestral accompaniment with somewhat unusually convex lows, like velvet, frames it.

In Sweet the Sting by Tori Amos, a pulsating, viscous and deeply sinking bass line does not obscure her singing, but adds drive and emphasizes a peculiar voice.

Jazz should also be recorded as asset HA-FW01. Anything of this genre, for example, Take Five by Dave Brubeck’s quartet, sound rhythmically, orderly, energetically, with an accurate, timbre rich and legible presentation of each of the instruments, but the contrabass turns out to be more weighty than with other headphones.

And, finally, rock of varying severity. The song Highway Star by Deep Purple is fast-paced, rhythmic, vocals are focused, legible, the stage is large-scale and filled with sounds to the brim. And the superslitter Smoke on the Water seemed to be waiting for its performer in the person of these “wooden” JVC earbuds to please with a mighty bass rhythm. This is really cool.

The addition of bass adds a groovy drive to the compositions of the Muse group, for example, Knights of Cydonia. It begins with the distant neighing of horses, and then captures with a dashing rhythm of a cavalry charge. The vastness of the overhead space is striking, with ample room for instruments and acoustic effects; vocals are legible and perfectly focused. And, of course, this whole multi-faceted design is based on a solid woofer foundation. Bass aficionados using portable music players or headphone amplifiers can turn them on with a Bass + switch or the like that many have. Us with Oppo HA-2 and iFi Micro iDSD Signature, with the participation of which the testing was carried out, it seemed superfluous – for our taste. With the first of the mentioned amplifiers, the sound turned out to be a little more elaborate – apparently, the effect of the device’s slight emphasis on HF affected. With the second – more dense. 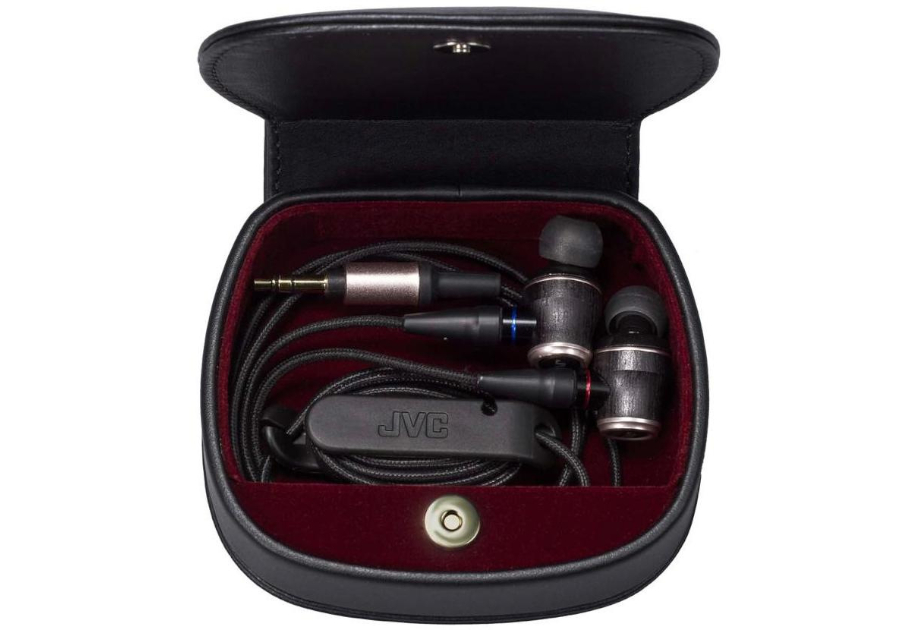 The earbuds are supplied with a detachable cable (it is not recommended to disconnect it often) with a length of 1.2 m with MMCX connectors on one end and a minijack on the other. Left and right radiators have independent grounding conductors to reduce crosstalk and improve overall noise immunity; and the fabric braid prevents mechanical damage

The JVC HA-FW01 has a very appealing sonic character. Despite the accentuated middle bass (or thanks to it), they can “sink into the soul” of many music lovers, and even fans of hard rock and similar genres can recommend them strongly. They have a sturdy construction, smart looks and a secure fit, and long listening sessions don’t tire. We advise you to take a closer look at this interesting model.