Home audio / video innovations are often recognized with EISA awards, although some of the winners remain technologically exotic. But this wireless kit has a very high chance of market success. Perhaps this is the most worthy alternative to serious multi-channel systems.

If you are anxious to hear the results of listening, then scroll to the second chapter. And here I am simply obliged to state the background, because, as you know, this is far from the first attempt to achieve the reproduction of surround sound in headphones. Many developers have tried fundamentally different approaches at different times.

The most obvious of them, for example, involved the installation of several drivers in each earphone. One was responsible for the vocal channel, the second for the LFE effects, the third, shifted forward – for the front scene, and its counterpart, shifted back – for the rear surround. Everything seems to be logical and simply must work. But no – such designs have remained the same techno-exoticism. They required special amplifiers, were either too expensive, or sounded very mediocre due to the use of a whole handful of cheap small speakers instead of a pair of normal quality. And the funny thing is that they did not give any effect of the environment – so, only its pathetic likeness.

There were even special gaming headphones with head position sensors, in which the sound field was twisted and tilted.

Why? It’s all about psychoacoustics. Our auditory perception is arranged in such a way that the sounds that are relative to the head to the left and to the right fall into the so-called “cone of uncertainty”, where the sharpness of localization of virtual images is greatly dulled. Therefore, it was completely pointless to put the speakers shifted relative to each other. But the second way was found – based on mixing. This method also looked logical: the multichannel sound decomposed into channels was reduced by a special algorithm into two channels in such a way that the acoustic signal entering the ear canal of each ear exactly corresponded to that coming to them from the acoustic systems of a multichannel cinema. This principle worked much better: the reproduction technique at the “iron” level was practically not complicated, processing could be carried out by the simplest DSP, and the effects were so noticeable that the software surround was widely used in computer audio and console games to create a virtual sound environment. It got to the point that even special gaming headphones with head position sensors appeared,

It was believed that such a thing would be in great demand among those who are professionally engaged in recording and mixing music.

“Virtual” is the main definition of the result above. Yes, with the help of binaural processing, the most incredible effects were easily obtained, but in headphones they sounded unnatural – they were voluminous, but still partially “tied” to the head. Which again was explained by psychoacoustics. Our brain processes not only the “original” acoustic signal transmitted from the outside to the sensitive organs, but also takes into account all its “distortions” (interference and re-reflections) that have arisen on the auricles and in the auditory canals. This is what is scientifically called Head Binaural Transfer Function (HRTF). This means that it remains to add to the signal the very “distortions” that serve as markers for the brain about the true position of sound sources in space, and that’s it – the problem is solved! But bad luck – HRTF-functions are very different from person to person. It will work for one, but not for everyone else. We need an individual approach.

Until recently, it was most originally implemented in the premium version of the Reval + plug-in, powered by the advanced Aural Map audio engine from Ebony. With the help of a special application, you took a picture of your ear, sent it for processing and received your personal HRTF profile, which could be used with different headphones (primarily the Audeze brand) to get the full illusion of classic stereo sound. It was believed that such a thing would be in great demand among those who are professionally engaged in recording and mixing music (this work can be performed with high quality only on special studio monitors, and then a real alternative appeared to do it with only headphones).

But what the JVC specialists proposed in the Exofield system is an order of magnitude steeper. They complemented each earpiece with a measurement microphone that accurately analyzes your HRTF separately for the left and right ear. Moreover, they use the resulting function not for stereo, but load it into an advanced surround processor that works with sound in 7.1.4 format, and theoretically get the 3D object sound of Dolby Atmos and DTS: X systems in full! 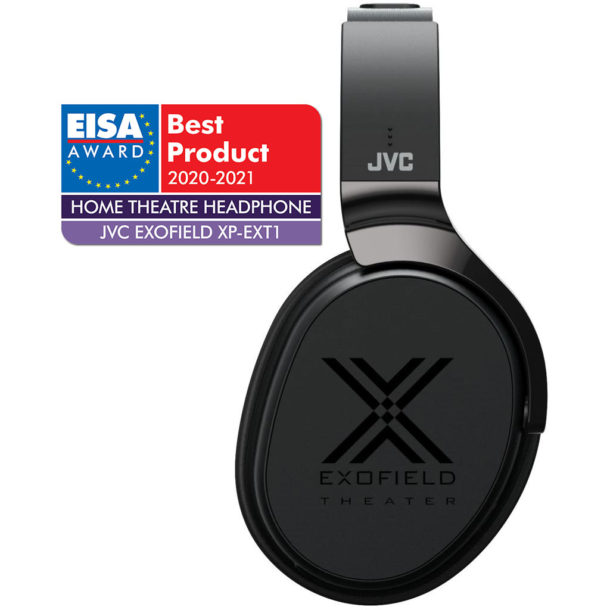 To check this statement, we decided not only to listen to the XP-EXT1 kit, where Exofield is implemented, but to supplement it with the most realistic “picture” obtained using a UHD source with a 4K projector, and run all this in full, not only on the cinema and videos with Atmos and DTS: X, as well as test tones for setting up large multi-channel installations.

But first, a few words about the product itself. The XP-EXT1H wireless headphones look like typical closed-back headphones with very soft and comfortable ear pads. They are not too heavy, but they will have to be periodically recharged via USB – the stock is enough for about three or four movie shows (according to the passport – for 12 hours). For signal transmission, its own radio interface with DSSS modulation is used – it is more advanced than Bluetooth A2DP and does not introduce delays. Also on the headphones there is a touch volume control, an Exofield switch and a jack for connecting a calibration system.

For signal transmission, its own radio interface with DSSS modulation is used – it is more advanced than Bluetooth A2DP and does not introduce delays.

The second component is the XP-EXT1P processor powered by an external adapter. A sort of miniature AV receiver – with recognizable Dolby and DTS logos, but without built-in amplifiers and switching bells and whistles. It has four HDMI sockets (one serves as a monitor output and provides 4K bandwidth), optics and a stereo analog stereo pair of RCA inputs with adjustable sensitivity. As you can see, the processor can be used not only as part of an existing system with an AV-receiver, but also as an independent unit by connecting a panel, all TV-boxes and game consoles to it. You may ask: why is there an analog input? Naturally, you can apply Exofield technologies in general with any sources – both in the original stereo format and with the simulation of surround sound by standard means. 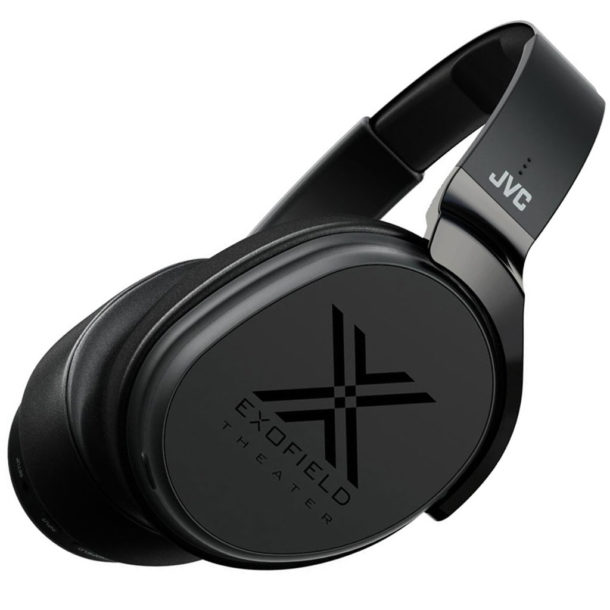 On the front panel of the processor, we find buttons and indicators for selecting additional processing modes and for quickly switching between user profiles. XP-EXT1P remembers settings for four users, but it can only send a signal to one headset, that is, it is still a cinema with one spectator “chair” (in practice, the second one can be easily provided through other headphones, but without Exofield).

All this economy is configured and controlled using a mobile application from a smartphone, which, by the way, is very convenient when you sit in the dark. The processor communicates with the latter via Bluetooth, but this channel serves only for control and indication of modes and does not transmit sound from the smartphone.

The most interesting thing is the measurement procedure (Exofield matching). You need to perform a simple sequence of connections and actions, as in the training video , sit with headphones motionless in complete silence and not be frightened by soft signals. First, the system will emit a series of clicks, and then – a couple of sweep-tones to measure the reverberation in the channels, absorption and frequency response curvature. All! In principle, this approach to some extent even takes into account the actual “age” of the listener’s ears, but if correction is needed – say, if you want to add lows or highs – then all this is done through an applet on a smartphone that controls the five-band equalizer in the processor.

For the Exofield settings, by the way, additional tools are provided: changing the balance, amplifying the voice channel in the range of -6 / + 6 dB (the same for LFE), turning on the dynamic range compressor and additional effects.

The processor can be used not only as part of an existing system with an AV-receiver, but also as an independent unit by connecting a panel, all TV-boxes and game consoles to it.

Without processing and on music programs, the JVC Exofield XP-EXT1 sounds no worse than some cool Bluetooth headphones. 40mm drivers have a wide bandwidth, do not fill the bass part, do not tint the top. The reproduction is clean, with good microdynamic processing and free from any technical “flavor”. One can only complain about a certain lack of maximum volume – I would like the headroom to be higher. But this desire arises only on quiet classical music. Just switch to a blockbuster with its noisy effects and the necessary “brain explosion” will be provided. Exofield is very noticeable. At first impression, they simply shoot out of your head all the virtual images sitting in it, and does it so cool that at first you feel awkward – there is an illusion that the headphones themselves are silent, and all the speakers in the room itself have accidentally turned on. When switching to your individual profile, the tonal picture changes slightly – at least, you get used to such changes in just a couple of minutes of listening. If you go to someone else’s profile of the ears, then in the sound you will notice some kind of synthetic “plastic” overtones. If it reminds of itself in your profile, then just try to recalibrate the system.

Exofield is very noticeable. At first impression, they simply shoots out of your head all the virtual images that were sitting in it.

It is important that while creating the illusion of outboard sound, the Exofield is fairly accurate in conveying ambient effects. You drive all possible speaker positions with test signals from the tuning demo discs and really easily find the difference in the spatial arrangement of non-existent speakers. It is, of course, not 100% accurate, as is the case with real speakers, the rear effects do not cause a burning desire to look around, and the ceiling breaks – to bend your head, but the three-dimensionality is expressed.

I will say more: after five minutes of adaptation, it begins to seem so reliable that not only the direction to the sound sources, but also the distance to them, begins to be “read”. And it’s very amusing when you can clearly hear how close each screen character is to you, invisible in the frame. 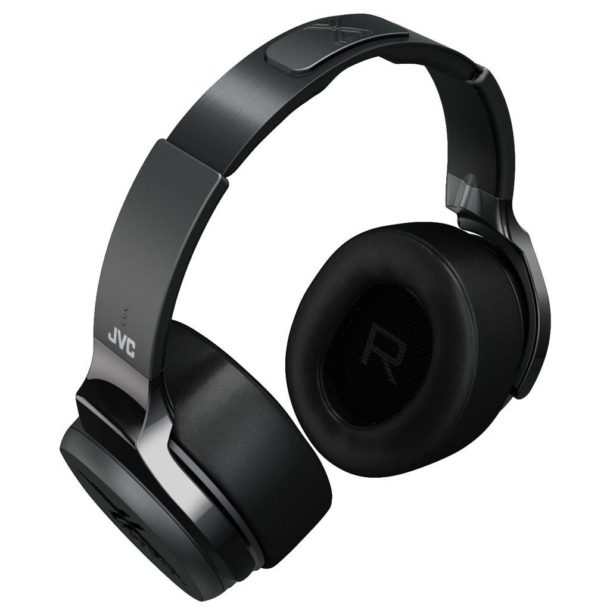 Actually, it all looks like a small revolution. I am sure that now you are looking at this kit as a possible addition to your home system – you will finally be able to watch Hollywood action in full effects, without disturbing neighbors or sleeping children with loud sounds. But when set up correctly, the system does indeed reproduce object sound as if it were a full-fledged theater setup with four ceiling speakers and a complete set of surround speakers. So this is no longer any addition, but a real alternative to complex expensive systems.

In any case, Exofield looks like the Best Buy that will allow you to immediately and without hassle plunge into the atmosphere of new films.