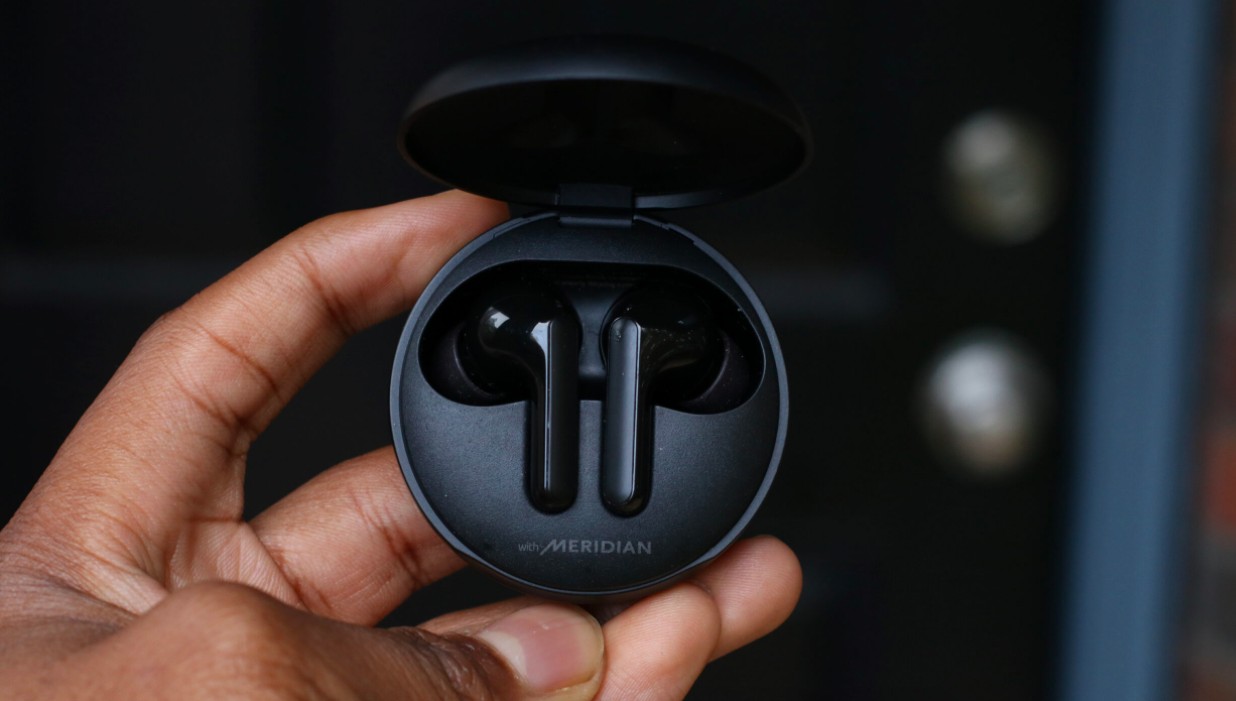 Completely wireless headphones are all the rage. Almost all smartphone manufacturers have been encouraged to launch their own products and LG has not wanted to be left behind. The South Korean company launched some time ago the LG TONE Free HBS-FN6 , TWS headphones that are committed to comfort and hygiene . Because yes, LG headphones come in a case that disinfects them with ultraviolet light, or so LG assures.

But beyond that peculiar function, interesting and complicated to test in equal parts, the LG TONE Free HBS-FN6 compete against such established devices as the AirPods Pro , the Huawei FreeBus Pro and the Samsung Galaxy Buds Live . How are they behaving? Next we are going to leave doubts in this, its analysis.

Design: Good comfort and a case that disinfects

We started the analysis by talking about design and construction. Like so many other completely wireless headphones, the LG TONE Free HBS-FN6 has an AirPods-like aesthetic and is finished in black plastic. The headphones consist of a mast where we find the charging pins, a microphone and the touch surface and a head with another microphone, the position sensor and the speaker itself.

They are tiny and quite light, weighing only 5.4 grams . Their design makes them fit well in the ear canal, but this is worth a moment’s attention. The vast majority of in-ear headphones have silicone rubber bands that not only serve to isolate us a little more from noise, but also to fix the headphones on the ear. These are no exception. The box contains different sets of rubber bands of various sizes and highly recommend that you try them all to find the one that best suits us.

The LG TONE Free HBS-FN6 are really comfortable even when wearing them for a long time . The rubber bands fix the headphones correctly and we have not had problems with falls or strange movements when making sudden movements or sports (on sports, note that they have IPX4 resistance). Their black finish and their small size make them concealed and, saving the distances, when we wear them they are quite reminiscent of the Huawei FreeBuds Pro.

We said earlier that the headphones have a touch surface . We’ll talk about the available gestures later on, but for now let’s just stick with the idea that they work properly. You have to give a soft touch and it is a pity that they do not detect the gesture of sliding like the FreeBuds Pro. We can change the volume of the music by giving two touches, but it is uncomfortable to give 15 consecutive touches (with small pauses every two touches) to put volume to maximum or minimum. 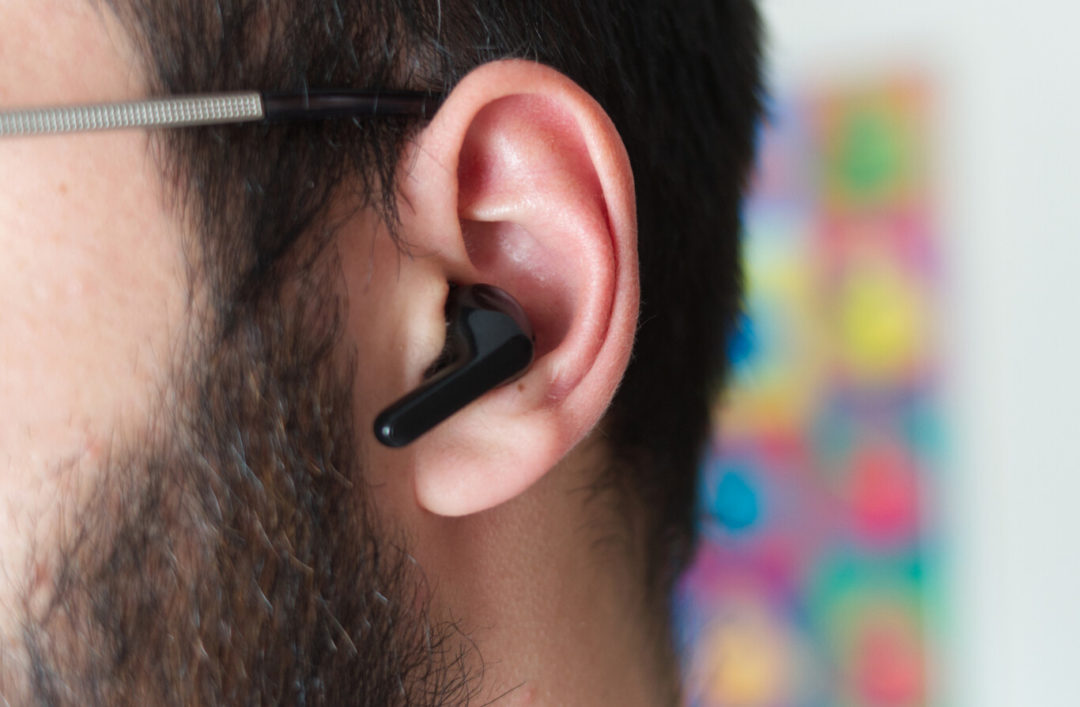 It is circular, beautiful and light, but its finish is not the most optimal. Why? Because despite the matte black gives you a look of the most elegant, the cover is filled with tracks just by looking . Nor is it a problem because the most normal thing is that the case goes from hand to pocket and vice versa, but it does not hurt to comment on it in the face of the most cleaning maniacs.

On the lid we have the TONE logo, on the back the USB type C, on the left the connection button and on the front a small slit to open the lid more easily and a notification LED . This LED is important, since it is the only system to know the charge status of the case.

If we close the case, leave the headphones outside and press the side button, the LED will light up in various colors. Blue means that the charge is greater than 80%, purple means that it is between 20% and 80% (that is, you are about to run out of battery as well as with the battery almost at maximum) and red is that is less than 20% remains. The system falls short and, as we will see later, the app does not help.

The lid has a magnetic closure that helps prevent the case from opening unintentionally. It is strong enough to keep the case closed and the bottom slit is quite useful for opening the case even with one hand. But be that as it may, the most striking thing is not the design of the case, but its disinfection system based on ultraviolet rays . 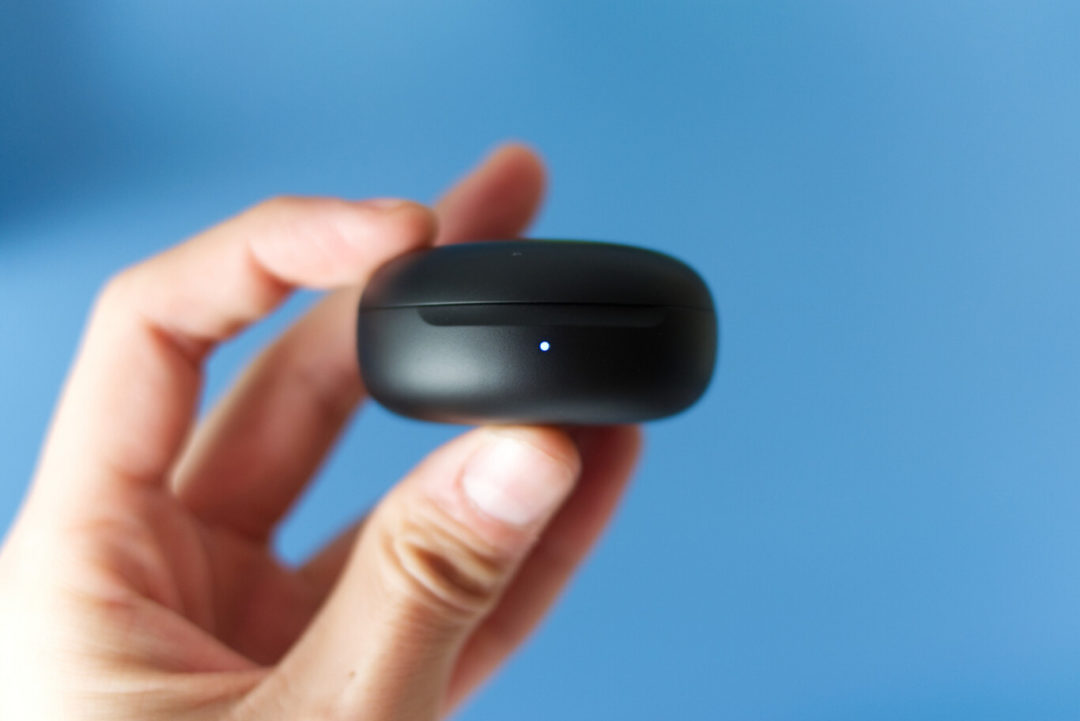 LG calls this technology UV Nano and claims that “self-cleaning with ultraviolet light eliminates 99.9% of bacteria while charging.” This claim is based on a study conducted in October 2019 by the Korea Testing & Research Institute and, according to it, “the ultraviolet LED light inside the charging case reduces Staphylococcus Aureus and Escherichia Coli in the headphones in the near part to the ear canals. ” This system only works when the case is closed , with the headphones inside and charging by cable.

Works? We cannot verify or assure this, but we do recommend that the headphones and ear pads be cleaned from time to time. What we can guarantee is that the blue lights that we can see when we open the case are merely decorative . Very pretty, but pure props. The reason is simple: UV light is invisible to the human eye. 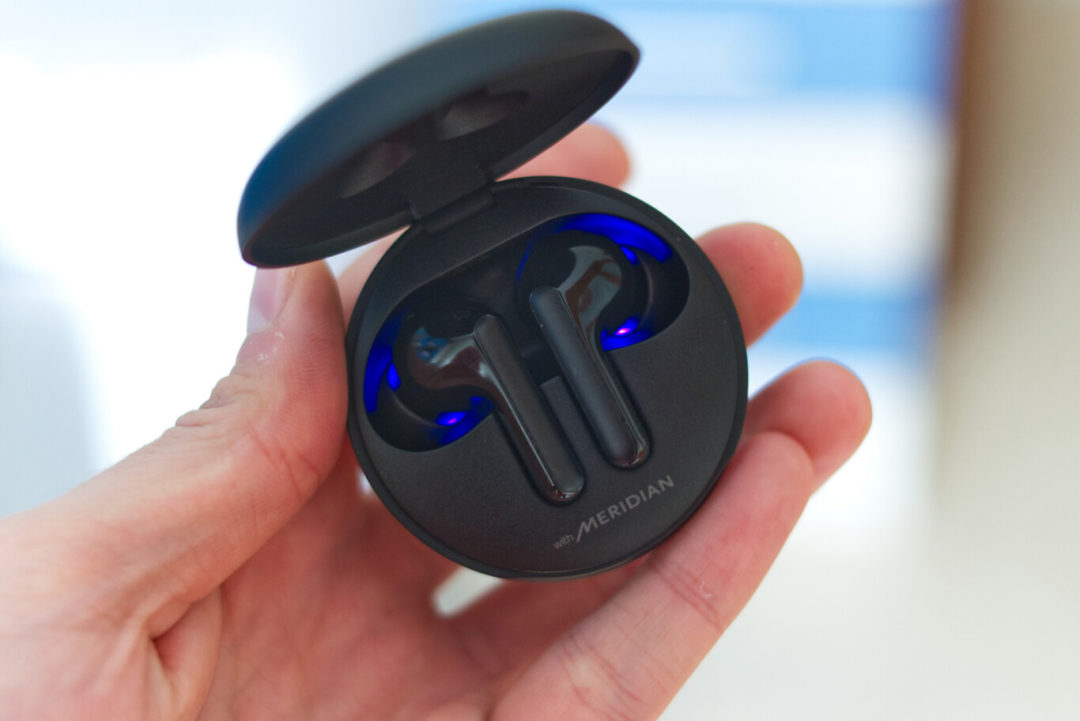 Having seen the headphones from the outside, we are going to address the experience section. In this we look at the software options, device compatibility and additional features included in the headphones. So, the first thing to note is that the LG TONE Free HBS-FN6 are compatible with iOS and Android and that the management app necessary to control them, LG TONE Free , is available on both platforms.

Android, however, is the one that stands out thanks to the incorporation of Google Fast Pair . This function allows that as soon as you open the case the mobile detects the headphones and links them. On iOS, however, it is necessary to go through the manual synchronization process, which consists of pressing the side button for a few seconds and following the instructions. There is no loss, linking is very simple.

The LG TONE Free HBS-FN6 are not the best we have tested, but not the worst either . We cannot ask for vertigo bass and perfectly defined treble for the price they have, but for a casual user looking for a correct experience they are more than enough.

To test the LG TONE Free HBS-FN6 we have listened to music on iOS and Android, both locally and in streaming, always at a 320 Kbps bitrate. The songs you select are those that we know best (because they are our favorites) and those with a wide range of frequencies and instruments like ‘Bohemian Rhapsody’ by Queen.

The sound quality is correct, always within limits. When asked if they can be heard well, we can answer with “yes” , but they kneel a bit when we expose them to songs with very deep bass and too pronounced treble. The different equalization modes available in the app help to slightly improve the bass and treble, depending on the mode, and we can always squeeze them a little more if we know how to play the equalizer, but the six-millimeter driver does not give more of itself and the sound tends to be somewhat flat .

Maybe some users miss a lot of punch in trap and hip hop songs, although in genres like rock and pop the experience is quite positive. They are not perfect headphones (in fact, they do not support the aPtx codec, only AAC and SBC), but they are sufficient for listening to music, making and receiving calls and watching a movie. They are, in a nutshell, a correct headset that will serve the more casual wearer well.

As for noise cancellation, they do not have or at least it is not active. What the headphones have is a function to increase or decrease the ambient sound that comes in, but the difference between having it at the maximum or the minimum is not too noticeable. They also have noise reduction on the microphones, but it’s not magic. Something cancels, but if, for example, you use a mechanical keyboard while making a call the headphones will not be able to cancel the noise of the keys.

One of the fundamental pillars of this type of device is the battery. LG claims that you can get up to six hours of autonomy, but during our tests we have achieved an average of around five hours . It depends a lot on the volume we use, whether or not we make calls, etc. Each user will have their own consumptions, but let’s stay with the idea that it is possible to use them during a relatively long journey by car without problem.

The charging case, meanwhile, is enough to charge the headphones up to two times . The headphones are fully charged in around an hour and the case charges in around two hours, although they have a fast charging system that allows you to achieve almost an hour of autonomy in 10 minutes. And speaking of charging, LG mini point for having incorporated wireless charging into the case, which is somewhat slower than wired, but also more comfortable. 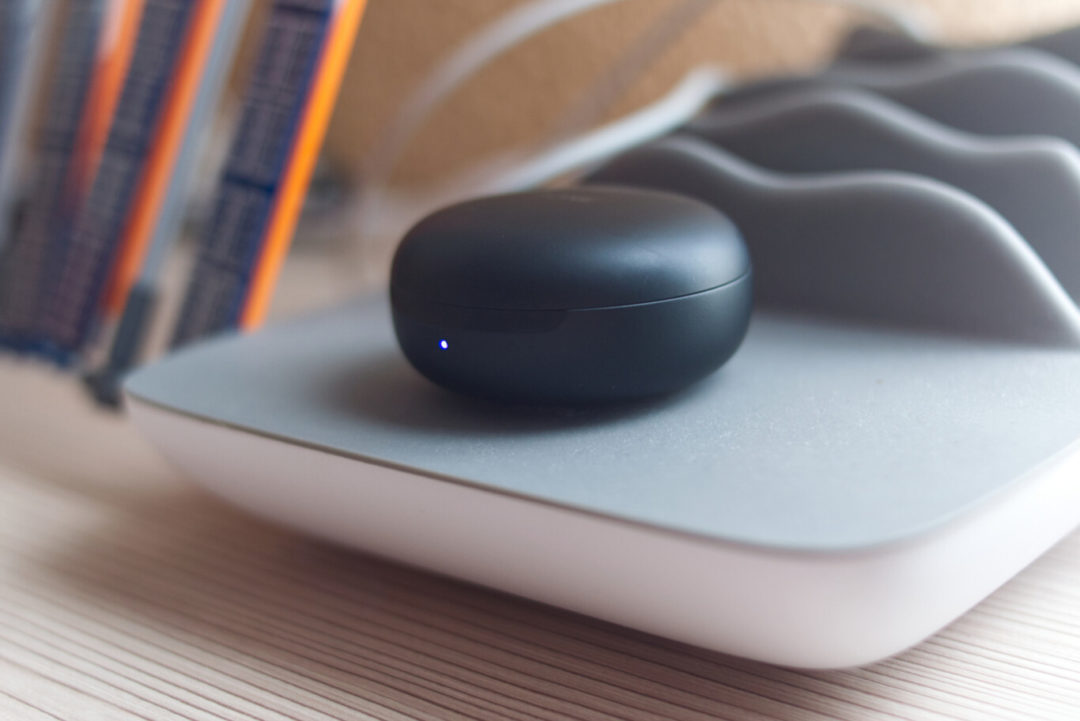 All in all, the normal use scenario for these devices is to wear them for a while, take them off, put them in the case and charge them, put them back on, and so on. Most likely, we carry the headphones charged or almost charged all day , so we can be left with the idea that it will not be easy for the headphones to leave us lying down during relatively long sessions.

LG TONE Free HBS-FN6 are headphones that stand out for their comfort . Their shape, size and thickness make it very pleasant to wear them for a long time without even realizing that we are wearing them. It is, by far, one of its great points in favor. They also have a good management application that, yes, has room for improvement.

The sound, however, does not end up standing out above other direct rivals. The sound quality is correct and valid for less trained ears, but more punch and a better representation of nuances is missing . Music tends to sound flat in almost every genre and while the EQ may help slightly, it falls a notch below its rivals.

The launch price of these headphones is 149 euros, a figure perhaps too high for the benefits offered , even more so if we take into account that they do not have active noise cancellation.