A new model has recently appeared in the range of Marshall: Major IV. These are compact and lightweight on-ear headphones with a classic design that can work with both Bluetooth and cable connections, while sounding up to 80 hours on a single charge. The design in the fourth generation of the model has remained practically unchanged. The same square shape as in the Major III, the same textured headband … Differences can only be found in a detailed comparison. For example, the axle in the cup-to-rim mountings used to be golden, but now it is black. The texture of the cups themselves has also changed. On the third model, the end face and ear pads had a large pattern typical for leather, on the fourth they were made almost smooth. That, in fact, are all the differences, not counting the changed main connector (here a modern USB-C appeared) and a stamp with a generation number on the plastic. 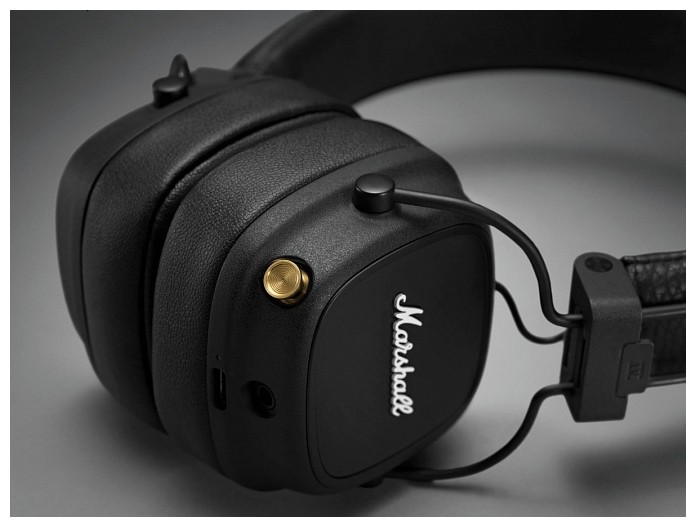 As before, a multi-position joystick is used to control the headphones. This element has caused a lot of controversy from the very beginning of its appearance: for example, some complained that it was inconvenient for them to operate in shaking conditions (for example, in public transport). But in general, if you get used to it, the joystick turns out to be much more practical than more traditional buttons and keys. Moreover, in such stylish headphones, the only control does not spoil the design.

The 40mm drivers seem to be the same too. At least we didn’t notice any fundamental difference in sound. Like most Marshall headphones, Major IVs perform well when listening to various directions of rock, guitar parts. This does not mean that they are not suitable for classics, but it is in such genres that you can feel what you paid for, in general, a lot of money. The instrumental sounds with good detail, the bass is also okay – however, just like on Major III. Subjectively, the fit has become a little more comfortable and the ear pads are a little softer, although we listened to the third generation about a year ago and could have forgotten the impressions.

Despite the softness of the ear pads, listening to music for hours is still difficult. Perhaps it depends on the anatomical features of a particular listener, but our editors agreed that after an hour of continuous use, you want to take off your headphones and relax. However, these are not the features of the model, but of the on-ear type of headphones. In this regard, the full-size Monitors are practically not tiresome.

The main feature of the fourth generation Major is, of course, a record autonomy. Imagine: 80 hours on a single charge. Against this background, the 30 hours that Major III offered seems a very modest characteristic. If you listen to music for a couple of hours a day, you will need to connect the headphones to the outlet no earlier than in a month. Moreover, if the battery runs out somehow suddenly, a 15-minute charge will be enough for as much as 15 hours of sound. Major IV also introduces the possibility of wireless charging – just put the gadgets with the right cup to the device.

As before, it remains possible to connect headphones with a cable. It is included, and the corresponding jack is located on the right earcup. The cable will also be useful for adherents of the ideology “good sound – only through the wire”, although with Bluetooth 5.0 the sound quality is practically indistinguishable from a wired connection.

Another use case for the cable is connecting two headphones. That is, you can receive a signal over a wireless channel for one pair, and then broadcast it over a wire to a second one (for example, when watching a movie together).

The oddities that we noticed in Major IV are the absence of an active noise reduction system and only support for the AAC codec. If for Major III for $85 . it is forgivable, then at the current price of $160. for Major IV, the buyer still has the right to count on modern options. Moreover, the noise reduction devices have already appeared even in TWS headphones.

Marshall Major IV is still a classic that always remains in value. Excellent sound, simple and pleasant design, comfortable fit. And, of course, amazing autonomy – in this parameter, the headphones are simply out of competition.