The Meze Empyrean headphones are equipped with magnetoplanar emitters of an unusual design – from the so-called. hybrid magnetic matrix. And on the membranes themselves, made of a thin heat-stabilized polymer, two conductive paths are applied.

By doing this, the developers tried to circumvent the limitations of conventional isodynamic systems. A clever concentric distribution of fields from thin arcuate neodymium magnets installed opposite each other made it possible to obtain a uniform force over the entire area of ​​the movable diaphragm and a high efficiency, and by dividing the radiating surface into two zones – with zigzag and spiral “coils” – eliminated the problem of delays in arrival signal from different points of the emitter into the auditory canal. Result: coherent radiation, minimum harmonic and “edge” distortion, high sensitivity (sufficient even for operation from not very powerful mobile devices) and the widest reproducible range.

Only one company in the world produces such drivers – Rinaro. And it is located less than 400 kilometers from Meze – in Lviv. 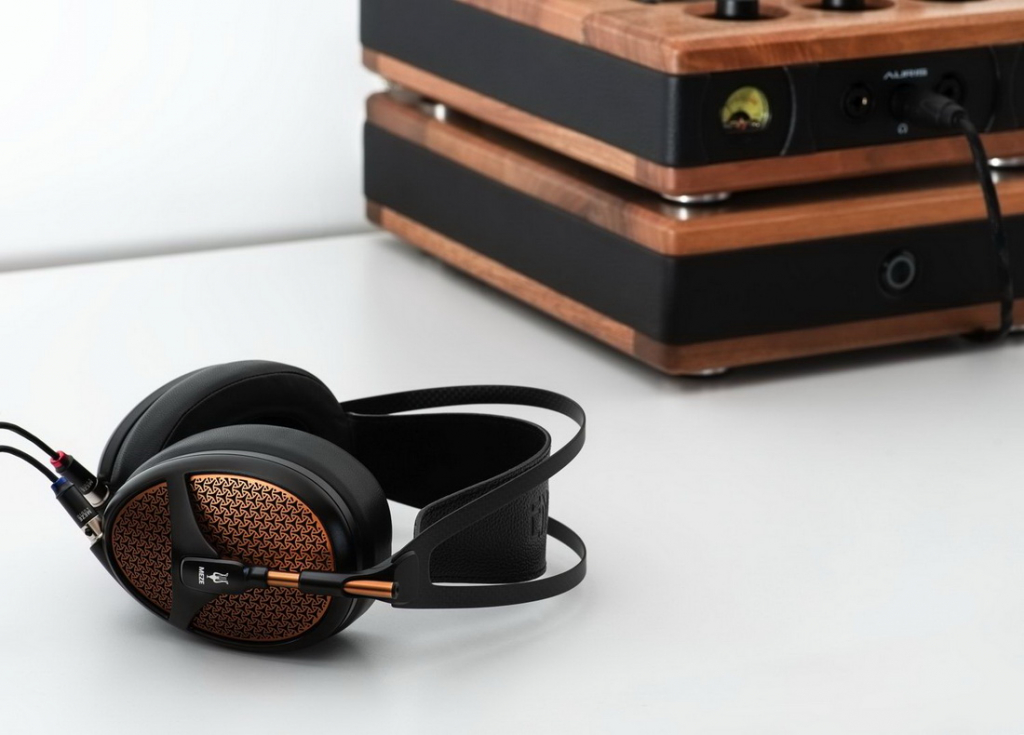 All elements – ear pads, driver frames, outer cups, suspension pivots, etc. – are surprisingly well thought-out with no weak or compromise parts. The materials are pleasant to the touch. The main element of the headband is lightweight and made of carbon – a material that will not lose its elasticity even after many years. Mesh “grills”, bearing the corporate ornament, look like a masterpiece in general. I also note the attachment of convenient removable rollers (by the way, the set includes two pairs – with a sheathing made of thin genuine leather and artificial suede with a perforated inner part). It’s ingeniously simple – you apply them so that they line up with the guide rim, and the ear pads themselves are magnetically fixed. Bravo! No creaking latches and locks that you are afraid of accidentally breaking, no effort to remove and install,

Each “cup” has a four-pin MiniXLR connector with a clip for removable cables. An additional protective mesh is visible from the outside under the “grills”. Replaceable ear pads also have thin metal protection. I will not say that the headphones are very light, but they are not as heavy as many of their classmates, and are quite securely fixed on the head. Thanks to the wide leather strap and movable hinges, they “sit down” with a pleasant balanced girth and are unlikely to cause discomfort during long listening sessions. Already for this, the developers are worthy of respect, although I have not yet said anything about the most important thing – about the drivers. Since cool magnetoplanar headphones are capable, as the manufacturer assures, of working directly from a laptop or smartphone, I first decided to test them for compatibility. Any medium-sensitivity headphones with Macbook Air usually sound low – the phone output of an Apple laptop does not differ in high power. But Empyrean, to my surprise, sounded dynamic even at ¾ volume! However, the dignity of such a “path” ended there. Audiophile magnetoplanars with their highest sound resolution immediately showed how carelessly the penny amplifier chip and the standard DAC handled the sound: the top was “gesticulating”, the middle was devoid of details, the bass turned out to be dirty and not too shaped.

Now imagine the anticipation with which I connected Meze to the OPPO Reno smartphone, which also has a much more powerful audio output (low-impedance headphones sometimes take the brain out of it), and the conversion of a digital to an analogue is performed by a much more advanced DAC (32 bit / 384 kHz). But I got only half of what I expected – a very clean sound, verified over the entire range and … noticeably weakened dynamics. Isn’t it a shame? Almost perfect reproduction, with a lot of details, but even at the maximum setting of the volume level it is simply not enough. Conclusion: Empyrean requires not so much a high output current from an amplifier as a voltage swing. Although, perhaps, the whole point is in dividing the signal into two conductive loops on the membrane – I can only guess how this affected the impedance characteristic and how the output stages of telephone amplifiers react to it.

With stationary equipment, the result was also not entirely predictable, but already caused much more optimism. The Astell & Kern DAC-amplifier with AK4490 converters (source – a laptop connected via USB) endowed Empyrean with very combat dynamics and detailed microdynamics. The upper register is almost like electrostats, with a very skillful elaboration of all the details and air. The middle is extremely neutral. Any “film” or “shell” shades were completely absent. The bass is solid, not stingy with a punch, with a confident elaboration of the “drums”. Add to this an exemplary scene. On many recordings, there was a general feeling that you were not listening to headphones, which usually provide an “intracranial” layout of virtual sources, but that the music itself comes from somewhere outside. Perhaps this is what But to be strict to the end, then in this run Empyrean made it clear that they deserve a much more serious path. Even with balanced signal output to headphones, Astell & Kern sounded more formal than musical: the lower register seemed a bit complex, the vocals were squeezed, and the voiced upper register (on tracks of standard or compressed quality) upset with dry “digital” shades.

I did not expect a serious increase in the class when I switched Romanian headphones to the TEAC UD-505 DAC amplifier, but the technology on the most modern AK4497 converters gave just the interpretation that only the most accurate sound monitoring systems have: weighted and natural tonal balance , very transparent atmosphere, rich and free from all “hardware” impurities (noise, distortion, coloring) top. The entire middle spectrum is intelligible and lively. The scene is just as clear, large-scale and not squeezed between the ears. Sometimes it seemed that there were minor problems in the bass (there was not enough effective punch dynamics), but all the low components, including those bordering on infrasound, were reproduced with such delightful realism, which is hardly possible for headphones on film. Having listened to a lot of recordings on such a setup, I came to the conclusion that Meze Empyrean can serve as the most meticulous and truthful means of controlling the quality of phonograms and sound path. Here are a couple of examples. The change in digital filtering algorithms offered by DACs from Asahi Kasei can usually be fully appreciated by ear only in a perfectly aligned stereo system, since it appears in the headphones in no more than nuances. But with Empyrean, these differences are at a glance. You can even without straining to notice the difference between absolutely identical recordings, but made in different formats – for example, in PCM 384 kHz or in DSD256.

To dig even deeper, I decided to add a very serious headphone amplifier to the path – an Audio Valve RKV Mark II tube amplifier (leaving TEAC as a DAC). The German technique added more play and color to the reproduction, more density in the lower register and freshness in the upper register, which was at first pleasing. But I started to switch filters – and there was no obvious difference. The new path has become a filter in itself, bringing even Hi-Res and standard CD quality recordings to a common denominator. This means that formally the resolution has become worse, but the musicality has even won something from this – everything sounded more holistic and artistic. Moreover, this interpretation can be corrected by replacing the Empyrean leather ear pads with Alcantara ones. In this case, in the middle register, the distinguishability of all timbre shades will become higher, and at the edges of the speaker range, it will soften a little. But this is already a conversation about tastes. For me, the most valuable feature of the headphones is its flawless monitor character.

These headphones do not lie, show all the beauty of sound, reveal any nuances and do it all so naturally that in the first moments you “stick” at listening, if an audio path is selected close to the ideal. The Meze Empyrean may indeed be the most innovative headphone available today, but a true audiophile doesn’t care about such titles. It is enough that these are at least the most expert models in their league. And they also look luxurious …

Advertisement
X
Subscribe to get the best Tech news and reviews of the week.
By signing up, you agree to our Privacy Notice and European users agree to the data transfer policy.
Close
02/08/2021