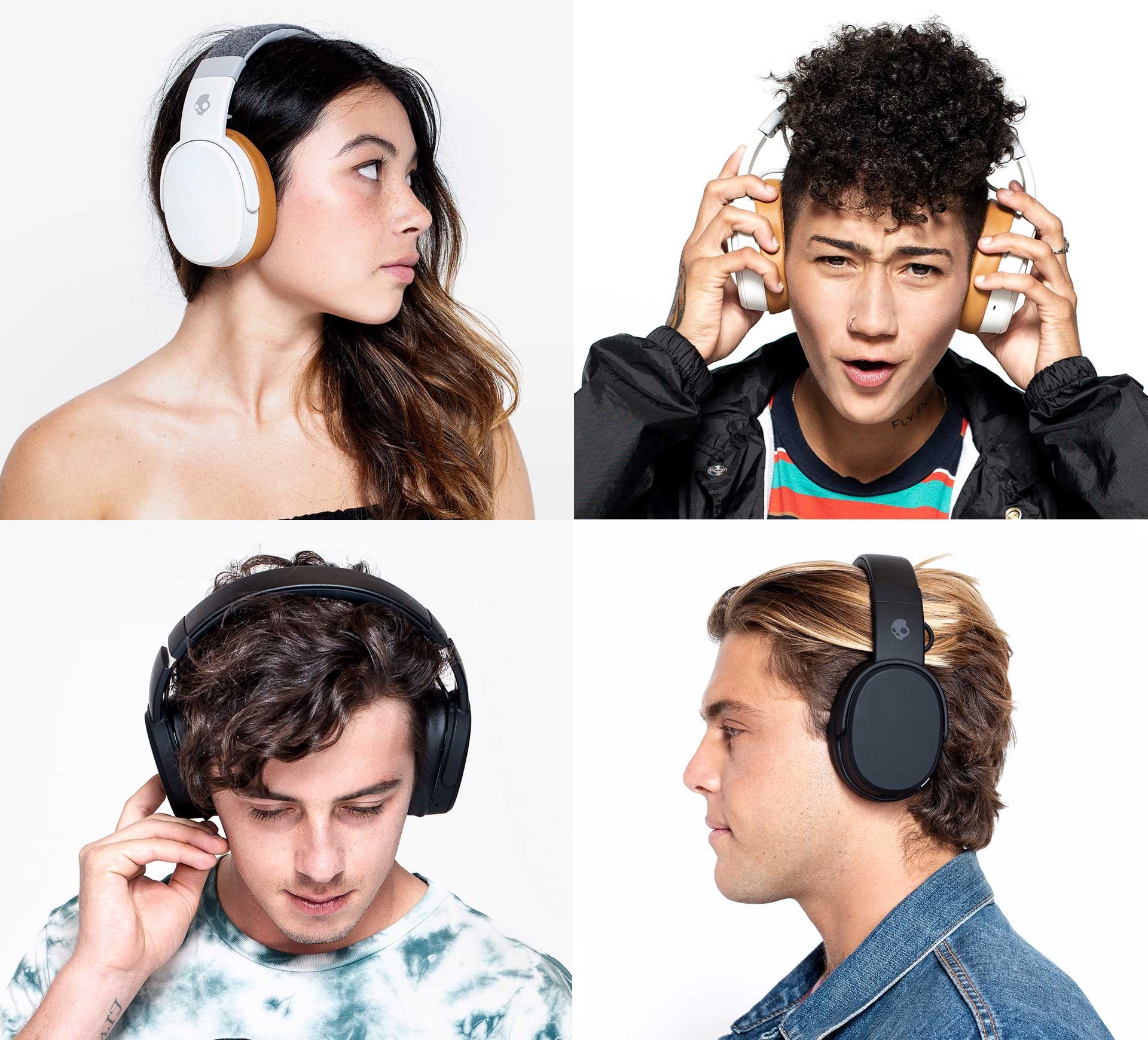 Unlike everyone’s beloved Apple, the guys from Skullcandy are not goons, they do not try to infringe on you wherever possible and try to put everything that is useful to you in a box. Most importantly, it has a nice storage case (again, hello to Apple). It’s very high quality, made from expensive fabric, and compact enough to fit in a small backpack.

Then there is, in general, a USB-C charging cable and a 3.5 mm cable, which will come in handy in case your headphones run out of power, but with an autonomy of 24 hours, I very much doubt that anyone will use this function, and even taking into account the trend towards abandoning the 3.5mm connector in both smartphones and laptops, this function can be used only with an adapter or a portable USB-DAC . To be honest, due to the design features, these headphones are not suitable for everyone, and there are several reasons for this. First, a small headband even with maximum adjustment. Taking into account the fact that my head is far from the largest, I had to make the headband as large as possible, therefore, if you are the owner of a large head, then keep in mind, otherwise the Crusher ANC simply will not fit on you. Trying on before buying is highly recommended.

Secondly, a slightly odd fit. Personally, these headphones seemed very comfortable to me, but still, when I was just getting to know them, I could not figure out how to properly put them on. Only after “practicing” about 10 times I realized what was the matter. Usually, holding standard full-size headphones in your hands, you will notice that almost all of them have the cups located at a rather significant angle in relation to the headband, as a result, the headphones seem to be more comfortable. But here this angle is equal to a maximum of 2-3 degrees, so some who have already had experience using full-size headphones may seem a little uncomfortable.

Before, almost the entire lineup of Americans was perceived by me as a low-quality nightmare made in China. But, these headphones are assembled very cool, of course, they do not play or creak, and also inspire confidence with their considerable weight, and are pleased with the premium materials. The headphones are made of incredibly cool plastic, the base of the headband is made of metal, and the ear cushions, in which the balance of softness has been perfectly preserved, are made of leather.

I also liked the design of the “crushers”. Often, completely black headphones do not fall into my soul, because usually, for example, in the same Sennheiser HD 250BT , plastic, besides black, is also of only one shade, and it does not feel premium at all, but in Crusher ANC, even if any of the light sources does not particularly shine on them, you can count at least 5, and when something shines on them, generally 20 shades. 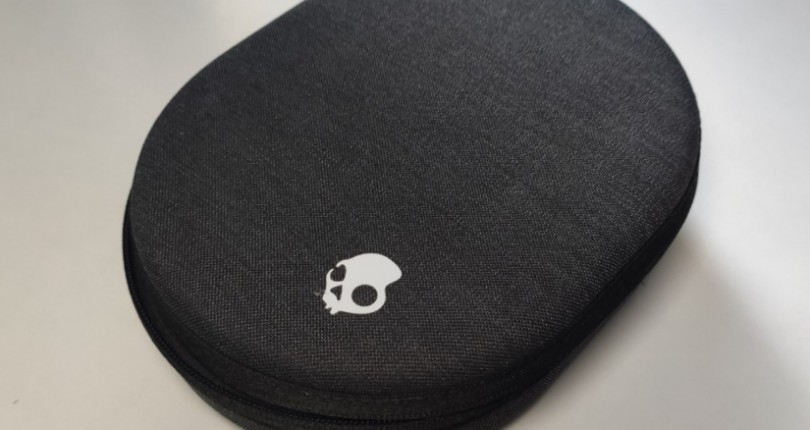 From what distance you look, you can see that the headphones are not cheap. I also found cool controls represented by round or oval buttons of gray color (judging by their design, greetings from the 80s), each of which is special in its own way. By the way, they are also very high quality and are unlikely to break over time.

As you might expect, there is a lot of bass in these headphones. Of course, he is in the first place here, but still I will not say that he drowns out everything that is possible, everything within reason. The vocals and mids are pretty good too. The middle ones pleased us with good elaboration, as well as microdynamics. The high ones played out quite solidly, but slightly synthetically.

In general, I would like to highlight the excessive assertiveness and sharpness of the headphones. Yes, the sound is a purely subjective and individual thing, but at a volume of about 70%, I could not listen to these headphones for a long time (unless I slightly tweaked the bass setting, which will be discussed later), because I am a lover of neutrality in sounding, but here neutrality is frankly not enough. I would also like to highlight the fantastic width of the stage, both for its class and the multi-level of the stage, while listening not only to classical music, but also to ordinary pop.

In general, these headphones are very interesting to listen to, they have good dynamics, they are very rhythmic, but still sometimes they lack some kind of balance. Don’t get me wrong, they don’t always sound mature. It is rather a product for bass lovers, and therefore most likely for teenagers.

No, of course I love bass, but sometimes it gets a little too much. But even despite this, Skullcandy engineers apparently considered that this was not enough, and therefore for bass freaks they even developed a special and absolutely unique function that no one else on the market has and is called Adjustable sensory bass, which I can rank among the category of cool and really useful features. It’s just a different dimension of bass and it is incomparable. This function is regulated, by the way, on the left bowl, but somehow I didn’t like to get it out to the maximum. For some songs, like the same rap, it was very useful to twist this function a little, by 20-25%. I got the feeling that they put 20 giant subwoofers around my ears and all of them as one whole created a kind of “nightclub effect”.

So, if you were hoping to hear that the Ccrusher ANCs have fantastic noise cancellation, then I’ll disappoint you a little, it’s pretty mediocre. Shumodav is, in principle, not bad at its job, but compared to competitors in the face of Bose, Sony and the rest, these headphones are a bit inferior in this regard. Plus, I really didn’t like the rather noticeable background noise. At first I thought that it was present only with the active noise canceling system turned on, but what was my disappointment when, even after turning off this system, it was still present. But, thank God, after the first 10-15 hours of listening, this problem is almost completely gone.

What I liked very much is that the noise cancellation in Crusher ANC does not spoil the sound quality, so there is not much difference in quality when it is turned on or off. I also liked the ease of turning this system on and off. In the same bose, in order to turn off or turn on this system, you need to download a special application, and every time you wait until your headphones are synchronized with the application, and often, even after several minutes of waiting, this did not happen. Here the situation is completely different. In order to turn off the ANC system, which is turned on by default every time, you just need to double-click the power button, and that’s it. No inconvenience.

If we compare crusher anc with competitors, then first of all I would like to compare them with Sony wh-1000xm4… It’s clear that if noise cancellation is a priority for you, then you will not find the best headphones on the market than Sony. Sony from year to year creates the most innovative headphones in its class, but you know, I would not take “thousandths”. Neither from the fact that I do not like them externally, or by some other parameters, I just do not like their sound.

For me, headphones are primarily a story about sound, and somehow I didn’t work out with Sony in this regard. I don’t understand their sound at all, so if noise reduction is the most important criterion for you, then take Sony, perhaps you will like them in terms of sound, because the sound is a purely individual thing. Skullcandy, in turn, is not for fans of ideal frequency response and evenness.

Bose NC headphones 700 , like their predecessors QC35 , of course, take their comfort and a good active noise cancellation system. If you travel often, or just like to listen to headphones for a long time, and also prefer a neutral sound, then Bose is more suitable for you.

Interesting sound, good comfort and noise cancellation, as well as good build quality and package bundle. Sounds pretty good, don’t you agree? But still, I would like to raise a question that will sound like this: “For whom are these headphones?” Don’t get me wrong, I liked the Crusher ANC very much, but I still can’t understand why Skullcandy made them so individual. I don’t argue that it’s very cool to stand out from the crowd, but does the company really understand what consumers want?

Top ANC Headphones on the Market  In the last few years, hellish competition and I am sure that the sales of this model are not going well, despite what hopes were pinned on this model, because you must agree that these headphones do not fully cover any needs. It is very cool that there is a characteristic sound, but will this aspect be in your first place when choosing headphones for the road and for every day? That’s right, no. You will be more interested in comfort, which here, like sound, is not suitable for everyone, as well as noise reduction, which is inferior to competitors. But, despite all this, I would take these headphones for myself and most likely I will soon acquire them.

Yes, they are not the most practical, but with them you will definitely not feel like part of the crowd. Most likely, having bought them, each time picking up and listening to music in them, you will have an ordinary feeling of joy, as it happened to me