Sony IER-M7 Review: Will appeal to music lovers as well as artists The Sony IER-M7 is the smallest model in the family of in-ear reference earbuds for professional use. Their main purpose is to control the sound during the performance on stage, when solid over-ear headphones, appropriate on the sound engineer’s head, will not adorn the artist at all. However, in terms of quality of work, they should be comparable.

With professional equipment as well as high-end sources / amplifiers. Preference should be given to those equipped with a balanced output

With the middle of the three headphones in the lineup, Sony IER-M9 , we already had the pleasure to get acquainted. The IER-M7s are very similar, but cost half the price. Let’s try to figure out what constitutes this price difference, and which of these earbuds are more suitable for a simple music lover. Miniature but not simple

All models of the professional family are equipped with Sony proprietary armature speakers. This is a special type of electrodynamic heads, the invention of which dates back to the 20s of the last century. They are also called emitters with a balanced (balanced) armature – this is how a moving element with a working winding is called in electrical engineering. The definition of balanced in this case means that it is designed so as to rotate around an axis, thus setting the membrane in motion through a special lever to create sound waves.

The main advantages of such emitters are the miniature size and accuracy of converting an electrical signal into an acoustic one, but they have a limited operating frequency range, so a set of such elements is used in headphones, often in combination with more traditional speakers to create low-frequency sound. In small cases Sony IER-M7 has four armature speakers, the IER-M9 has five – one more supertweeter.

The tiny radiators are housed in an internal magnesium chassis, and the sound they create is fed into a short brass waveguide and exited. The music signal is divided into frequency sub-bands before being fed to them by a crossover, which uses a special audiophile film capacitor.

The shells of the earbuds are made of plastic, they are lightweight and comfortable to be placed in the auricle. No decorations are provided – all the elements are in black, only the letters R and L on the protruding corners that help to correctly orient the headphones are applied on red and white backgrounds, respectively, as is commonly accepted to denote the right and left channels. The connectors on the supplied cables are marked with the same colors (more precisely, red and gray), so you won’t be mistaken when connecting them. 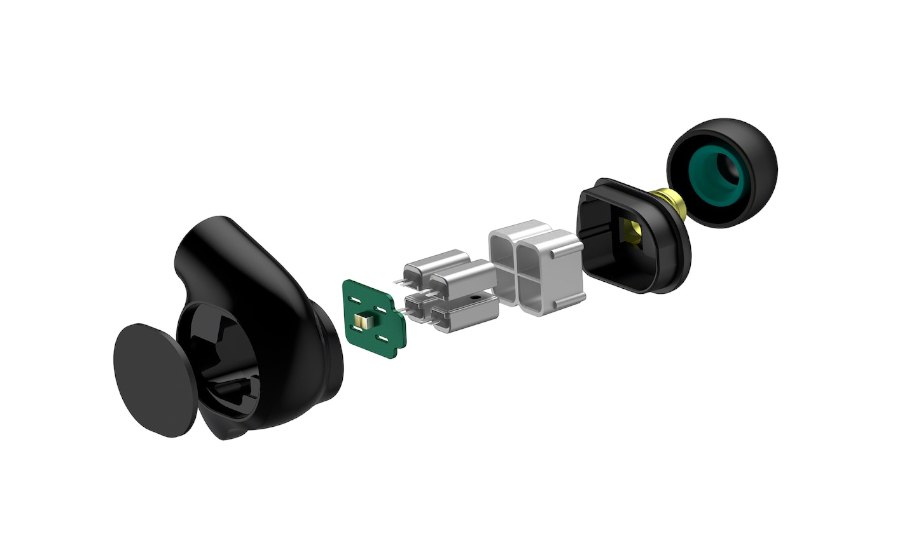 The inserts contain strong magnets without shielding in their design, so do not place them next to bank or other magnetic cards – to avoid damage to the latter

The Sony IER-M7 comes with a fair amount of accessories packed in a solid cardboard box. Inside, six pairs of foamed silicone tips and seven pairs of solid silicone rubber are arranged in their places. There are also two 1.2m cables for both normal and balanced source / amplifier connections. The first is equipped with an L-shaped 3.5 mm minijack, the second is equipped with a 4.4 mm plug of the same form factor.

The earbuds are securely but reliably held in the auricles thanks to the elastic behind-the-ear attachments that terminate the cables on the other side. It is also important to use the correct size earpieces: they should enter deep enough into the ear canal so that they do not fall out when moving the head, and provide maximum sound isolation – only in this case it will be possible to get deep and weighty bass. The sound of Sony IER-M7 monitors can be rightfully called correct. It is tonally balanced, very detailed, rich in timbre, dynamic, but without affectation; headphones clearly organize the acoustic space, provide visual focusing of musical images. Long-term listening with them does not cause the slightest fatigue, and with well-chosen attachments, they absolutely do not let external noise through. In addition, they do not put a lot of stress on amplifiers, even those found on smartphones. However, these gadgets, even expensive ones, should not be considered as a suitable source for the IER-M7 – except for the few models on the market that support Hi-Res audio.

During testing, the Sony earbuds were paired with the superbly equipped FiiO M11 Pro portable music player . It is very important that it has a balanced 4.4mm output. Comparison of sound when connected with complete cables very quickly tilted our choice in favor of the balanced version, which provides a better signal-to-noise ratio, and therefore finer nuance, better microdynamics and texture of bass, as well as more acoustic space overhead. Moreover, when choosing a source / amplifier for these expensive headphones, you should look for an option among the models equipped with such an output – then every ruble spent on the system will be invested in sound quality.

And the Sony IER-M7 makes it easy to understand which signals are fed to them: standard (16 bit / 44.1 kHz) or high definition, not to mention MP3. This is not to say that the former play poorly, but the difference will be obvious – connoisseurs of sound will get much more pleasure from listening to Hi-Res audio recordings.

The FiiO M11 Pro has an All to DSD function; activating it makes PCM files sound smoother and more sophisticated, and the headphones show the difference convincingly, forcing you to choose this option – despite the increased battery drain. As for DSD itself, then, for example, “the best jazz album of the 20th century” Jazz at Pawnshop in the DSD128 format is performed just fine. The atmosphere of the hall filled with pleasantly resting people is perfectly conveyed, the instruments are perfectly focused, their voices are rich, natural, rhythmic patterns delight with clarity, and the vibraphone emits gentle, silky and sometimes playful sounds that adorn the entire musical picture. At the same time, the player’s screen displays a stream rate of 11289 kbps – and the headphones obviously like it too.

Mozart’s “Requiem” in FLAC (24/48) with about eight times the bit rate is delivered extremely faithfully, with accurate portrayal of the orchestra, chorus and four soloists in the foreground. The natural sounding of their voices is especially impressive: timbres are strictly individual, intelligibility is at the highest level, emotions are strictly dosed – as it should be in a piece of this genre.

Good CD-quality recordings from the Sony IER-M7 will not disappoint either, on the contrary, you will hear much more detail in them than you could before. All melodic and rhythmic structures are easily traced in the composition Rapture of the Deep from the album of the same name by the group Deep Purple. The lines with which they are drawn are very distinct, while the musical canvas is very colorful, full of halftones and shades. The dynamics are also in perfect order, the attack is swift, the beats of the drums are weighty, including thanks to the deep bass. The vocals are lively and articulated, the image of the soloist is clearly focused.

That being said, it may seem like a little lack of drive. However, after listening to the same song with other quite cool headphones, you begin to understand that there are no special complaints about the emotionality of the IER-M7, just involuntarily, in addition to their amazing meticulousness, you also expect some kind of special energy, which, however, will hardly help a sober assessment of the sound – let’s not forget about the professional purpose of this model. Having decided on the size of the nozzles and choosing the right cable, all this, together with the headphones, can be placed in a small complete box with a hinged lid, where there is already a holder for the cable, a clip for attaching it to clothes, as well as a napkin

If we talk about ordinary music lovers, then the Sony IER-M7 will appeal to those who prefer to immerse themselves in listening with their heads, savoring all the details and nuances, who will appreciate the high accuracy and reliability of reproduction of records of a variety of genres, providing natural sound. Those who listen on the run or want to recharge their energy from music should look for something else.

In our opinion, this model has a better price / quality ratio than the Sony IER-M9, again from the point of view of a simple amateur, not an artist performing on stage.