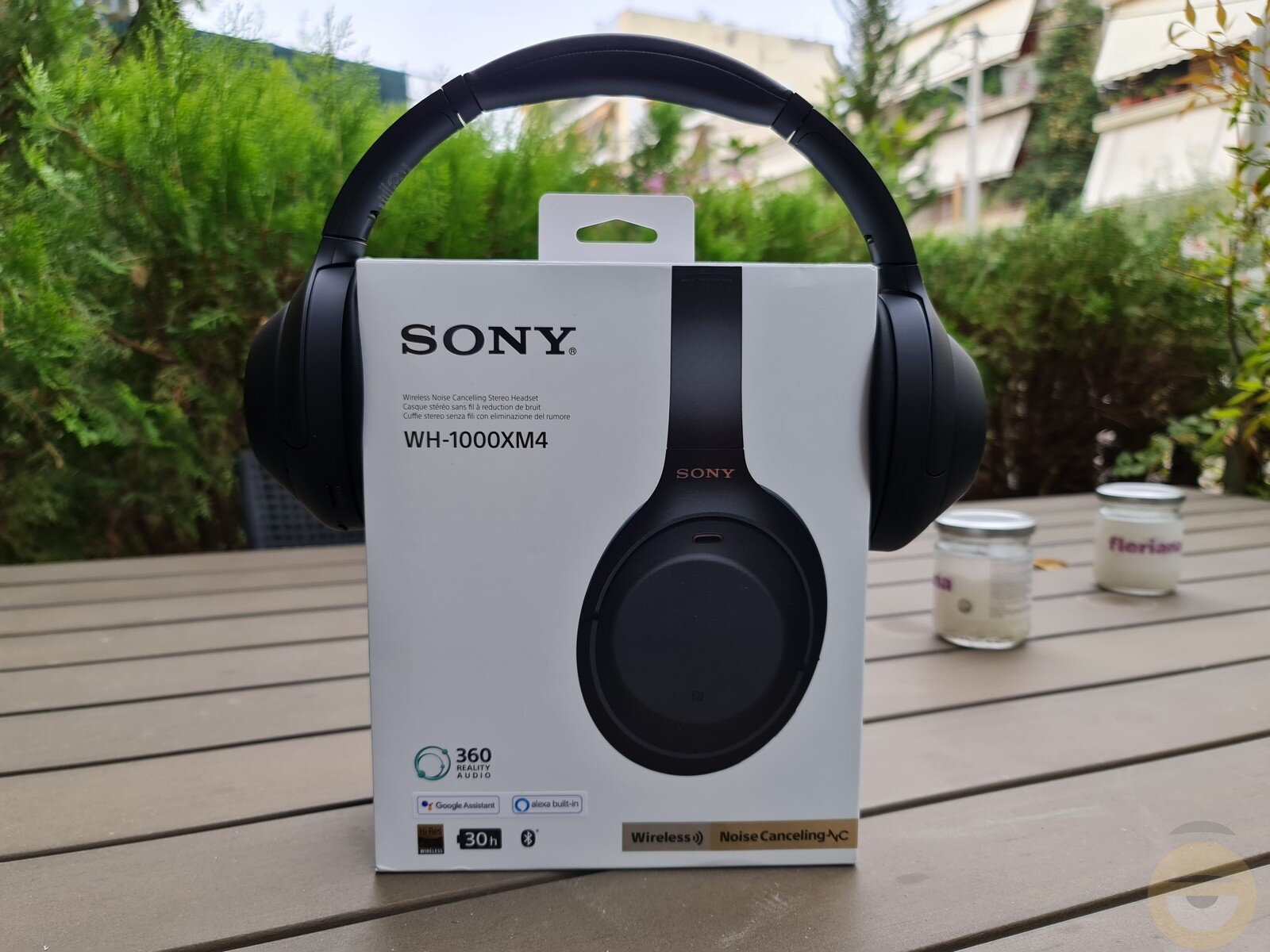 It is known that Sony has created a sensation in the category of over-ear headphones, which initially stand out for their ability to neutralize external noise, while providing top sound quality. This does not mean, however, that the problems or some important features of the latest generation, which was released about two years ago, were missing.

With the Sony WH-1000XM4, the Japanese giant takes a great pair of Over-ear headphones and further enhances it in important areas, but leaves others behind. Are the improvements enough for the XM4 to conquer the “crown” in the category?

Initially, those who remember the XM3 will notice that the exterior design is practically identical. This is because the aforementioned improvements were made under the shell of the headphones and, presumably, Sony thought: why bother with a winning design? The XM3 had a great design and remains popular, so a drastic design change might have done more harm than good. It is simple, elegant and suitable for any occasion, from the train to a business call.

The construction consists mainly of high quality plastic, which does not wear easily and gives the feeling of solidity, while leatherette covers the soft cushions. They are quite comfortable on the head and do not tire even after long hours of use, so their size should not “scare” anyone interested.

On the outside of the left handset is the (deactivation) button, the Custom button which assigns functions selected by the user (if its function is not changed, then the noise cancellation modes are cyclically changed), and a 3.5mm jack port for wired connection and use. On the right handset, there is only the USB-C port used for charging only – which practically means that mobiles that lag behind the 3.5mm jack port only support Bluetooth connectivity. The track that stands out most in any handset, is equipped with a touch pad from where the user starts or stops the music, changes songs and adjusts the volume.

Perhaps the only, but very important, feature that has not undergone any change is water resistance. As we are talking about premium headphones, one would like to use them safely inside and outside the house, but the XM4 has no resistance to water – even simple splashes – so for someone who is constantly on foot and therefore may experience walking with rainy weather, lack of protection is a key criterion for their purchase.

The Sony QN1 processor used in the new headphone SoC is the same as that of the XM3 but promises better noise reduction performance due to other changes Sony has made. In practice, the increase in quality compared to the XM3 is immediately noticeable as in places with constant but low noise, such as that produced by a fan, the headphones filter the noise pollution to a point where it becomes imperceptible while if at the same time sound comes from the headphones, then the noise is as if it never existed. The only cases where noise has overtaken the filter are abrupt and very loud sounds, like the whistling of a wind, but we are talking about a fantastic performance in the vast majority of cases where noise cancellation had to intervene.

The icing on the cake of noise cancellation, however, is another and it is not a simple performance improvement. XM4 can provide the desired level of noise abatement depending on where you are, by tracking the GPS location of your smartphone. In this way, it can automatically filter everything when one walks on very noisy streets and when one arrives at work, it can be adjusted as needed so that human voices can pass the filter. Of course, this requires a clear GPS signal and will not work in places like a metro station, but there are always solutions – the user can set the noise cancellation mode just before entering the metro (let’s say now)

Of course, there is always the option to manually control various aspects of the noise reduction function, through the Headphones Connect application that accompanies the headphones and which is a necessary ally if one wants to make full use of the power of the headphones. Chances are that in order to invest in headphones of this price level, one cares both for the quality of the sound and for the additional possibilities, so the use of the application is sometimes even a one-way street.

A brand new feature is Speak-to-Chat, which when activated detects user-generated speech and stops music while reducing the filtering level of noise cancellation. Theoretically, in this way one can converse with someone without taking off the headphones, something annoying when it comes e.g. for a short question, without the need to press the surface of the right headset, which allows the user to hear external noises and speech. After the user stops talking and after a short pause, the music automatically resumes from where it left off. A very useful feature for office use, for example, where breaks may be frequent. Simply, do not start whispering lyrics with the function activated, because the music will constantly stop something … spastic. In general, we can not say that the function completely satisfied us with its performance, since it made us more “tired” and it should work without problems in order to choose to have it constantly activated.

Something similar in terms of automatic pause and resume music is integrated into the general context thanks to a new proximity sensor inside the left earphone, which detects when you wear the headphones and when not, and respectively plays or stops playing music, something extremely useful.

Finally, something that was missing from the XM3 and we finally wanted to see, is the multipoint pairing feature, with the use of which the device can be connected to two different sources via Bluetooth and used for each. For example, it can be connected to the computer to listen to music and at the same time to the mobile phone, so that if it receives a call it can answer it directly from the headset and even speak through them. Extremely convenient for us as well, a necessary condition for buying in-ear and over-ear headphones that play at high price levels.

The 40mm headphone drivers remain the same as the XM3, offering a balanced sound that doesn’t sacrifice detail or bass to a great extent – sound preference is a purely subjective matter, of course. In songs we have heard and heard over the years, the XM4 offered pure audio enjoyment at least to the ears of a mere user rather than a musician. Through the Headphones Connect application there is the possibility of customizing the equalizer, so whoever wishes can bring the sound to his measurements with a little effort.

In terms of codecs, it incorporates Sony’s LDAC which performs well on supported devices (of which there are few anymore), but lacks the popular aptX / aptX HD for anyone who would prefer them. Various music streaming services offer support for higher definition files, where the bitrate climbs to 600kbps and reaches even higher and the quality difference is noticeable. The only downside is that in order to play using LDAC, the multipoint pairing function must be completely disabled. Speaking of support, 360 Reality Audio returns to the XM4 and offers perimeter sound so that the sounds that reach the user’s ear are more easily separable. As a function it continues to impress, but given that there is material – its support is neither broad nor rapidly growing, so we do not consider it to play a key role as a buying criterion. At the moment such material is provided only with three applications (Tidal, nugs and 360 by Deezer) which are not an exaggeration to say that they are not popular.

In other improvements, DSEE Extreme support enables quality optimization of compressed music files, with quite good results in general. The quality of the final result, of course, is purely subjective – in some cases the improvement was excellent while in others, the sound processing was perceived and, whether we like it or not, we focused on it instead of the music.

Utilizing 5 microphones in total, the quality of the audio recording is improved compared to the XM3, but it is clearly something that does in addition to the rest and not one of the main trump cards in the XM4. The quality is not inferior and in fact the sound is processed enough to remove the noise and keep the speech clear – this results in the sound sounding more digital and processed than natural, with all that implies for someone who Speech is a basic daily need.

In addition, for someone who works alongside others, sound insulation starts “leaking” at about 60-70% of the volume (depending on the type of song) so it may end up being annoying to those around. It is something that was observed only in closed and quiet spaces and in no case will it be a problem e.g. in a train car, but it is worth noting since telework has become a reality and many couples work together from the same place.

Sony promises a battery life of about 30 hours (with noise canceling enabled) between charges, which does not change from the XM3 but remains at a satisfactory level as we found with these headphones. As various new features have been added, it is a good thing that it has not been reduced, as some of them can (theoretically) extend battery life – such as the sensor that detects whether or not you are wearing them, to reduce unnecessary battery consumption.

The main part of the battery is the fast charge, one of the complaints we had with previous generations, which is now supported, which can offer up to 5 hours of use with 10 minutes of charge while full charge takes about 3 hours to completed. Given the benefits, 5 hours of battery life with 10 minutes of charging is a good new addition that can save the user from unpleasant news if he forgets to charge them in time before a trip or finds himself without a battery during the day.

Looking at the Sony WH-1000XM4, and having knowledge of the XM3, it is clear that we are not talking about a model that changes the data so far but about an improvement on the already solid foundations that the previous model built. It remains one of the most versatile pairs of headphones on the market, doing more or less everything for an average or slightly advanced user, and does them well enough to meet a variety of needs, from simple street music to business calls. In our case, it was enough to integrate the function for simultaneous connection with two devices to be satisfied with the WH-1000XM4, but Sony did not forget the innovation.

With that in mind, for someone who owns the XM3 the upgrade may not seem necessary but for everyone else they are a great, premium choice.