This time we are looking at Steelseries Arctis 1 Wireless – ascetic wireless headphones with versatility of connection.

Inside: the headset itself, a removable microphone USB-whistle for wireless connection, an adapter for it from USB Type-C to USB A, a cable with a 3.5 mm minijack and a USB-microUSB cable for charging the battery. Steelseries Arctis 1 Wireless design is minimalistic and does not look like standard gaming ears.  Although there are enough models with such a design in this segment.

The headset is made of matte plastic. He easily collects “fingers”, but they are almost invisible. A soft pad was made from below and covered with leatherette. There are no inscriptions or names of the manufacturer. The noise reduction for this option is average, but the ears sweat less. But in the case of Steelseries Arctis 1 Wireless, it is better, and the first week, while they are new, is almost perfect.

True, this has to be paid for with strong pressure on the head. But this situation is temporary – you have to wait until the metal bow stretches and “adapts” to the user.

Then the headset is not felt on the head, it sits comfortably, does not press, does not press, does not float. Based on experience, in the summer, ears sweat even with fabric ear pads, just less than with eco-leather. But the fabric gets dirty faster, which means that the ear pads should be washed more often. But they can be removed and put on in one motion, which will simplify the task.

The assembly is at a high level, the headphones do not emit extraneous sounds, nothing comes out anywhere, does not stick out and does not interfere with use. 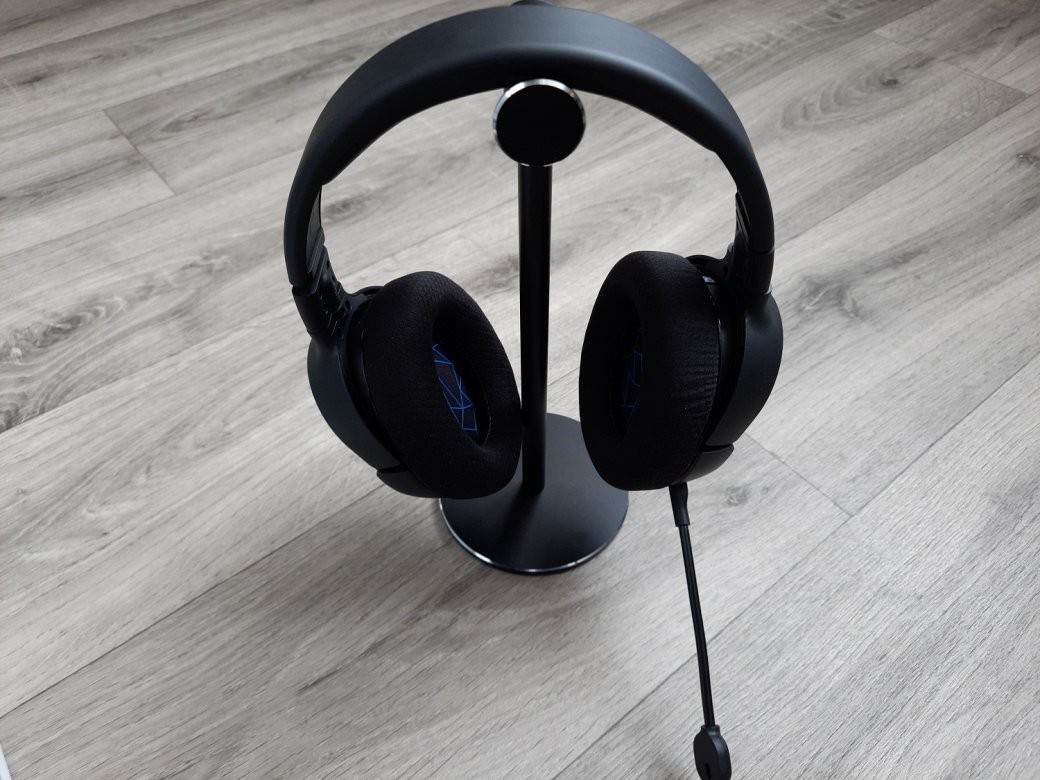 On the right cup is the headphone on / off button. Nearby is a light that flashes in different colors, indicating the charge level or connection status.

The button controls music and calls. One press stops or turns on the track, accepts or rejects a call, two press switches to the next song, and three to the previous one.

The left cup of Steelseries Arctis 1 Wireless is occupied by an analog volume wheel, a microphone activation button and a connector for its connection, a micro-USB input for charging and a 3.5 mm audio jack. All elements are in convenient places, easy to recognize and turn on. The main question for the model at this stage is why, when using USB C in the wireless connector, did they leave the old microUSB for charging the headphones themselves? Why waste time on trifles and not put USB Type-C in both places? Steelseries Arctis 1 Wireless are “omnivorous” and instantly connect to all types of devices. The headset emits one squeak and connects without unnecessary problems, companies in the settings and driver installations.

Wirelessly, via a USB whistle, the headphones connect to laptops, PCs, smartphones, PlayStation 4, PlayStation 5, Xbox One, Xbox Series S | X and even Nintendo Switch. The main thing is to have a USB Type-C port.

And if there is no such connector, then an adapter with a wire is included. True, for some reason they made it long and when connected, this thing sticks out and hides hard. Perhaps this will help someone, but for most users a short adapter without a wire would do. To connect to a smartphone, and to a game console, and a PC or laptop. And most importantly, nothing would stick out from anywhere. It is not clear why the manufacturer did not foresee this. The USB connector does not use a Bluetooth connection, but a 2.4 GHz channel with minimal latency.

In practice, I was never able to identify it and the sound was transmitted with lightning speed to whatever I connected the headphones to.

Steelseries Arctis 1 Wireless works wirelessly when charged. It is possible to connect via a regular cable with minijacks. True, in this case, the sound is a little worse, and it’s strange and cool at the same time. This is the first time I’ve come across wireless headphones with such a good signal quality.

The microphone is medium length and bendable. Connects and detaches easily. The sound of the voice is adequate, but in the standard settings it is both dull and rattling, while the surroundings are strong. All these problems are solved using proprietary software, which we will talk about below.

The general impression of the microphone is normal, but it lacks stars from the sky like most models in this segment. Steelseries Arctis 1 Wireless are loud and attacking. The emphasis is on low frequencies and mids, but there are also enough highs.

The headset has excellent positioning in games. Fans of shooters will especially like this.

Other genres sound powerful too, so I recommend headphones for everything and everyone. It is also good to watch movies, TV series or YouTube videos in them. The music in Artis 1 Wireless seems adequate at first. But if you listen, the tracks “crumble”, and somewhere along the “edges” hisses. Therefore, audio transceivers should look for another model or take this one for games and something else for music.

Steelseries Arctis 1 Wireless claims 20 hours of operation without recharging. In fact, it came out somewhere the same or even more. True, I listened to music at a volume below average, so it happened. The headset is charged every three to four days, and I sat in them from morning to evening. Real-world use matches the manufacturer’s promise.

Steelseries Arctis 1 Wireless work with the native Steelseries Engine 3. The proprietary software has a strict pragmatic design, but everything is done in the style of the brand. From here you can adjust the sound and microphone volume in more detail, set the on / off timer, listen to your voice and add it to the sounds of the game.

For speaker settings, a six-band equalizer is available with ready-made presets and the ability to create your own. Custom sound settings are saved and loaded in various scenarios. For example, separately for playing games, watching movies or listening to music.

Steelseries Arctis 1 Wireless is a versatile gaming headset that replaces multiple pairs of headphones. It is relatively inexpensive, has no RGB backlighting and looks austere, which is a plus for some. The headphones are convenient to use, they normally cut off ambient noises, sound good in games and with multimedia, connect by “air” or wire literally with all gadgets in the house.

Music lovers are unlikely to like its sound, but most users will be satisfied. Confused by the outdated microUSB port for charging, which slows it down, as well as the omission with a compact USB C to USB A adapter. Otherwise, Steelseries Arctis 1 Wireless can be safely recommended for purchase as the main model for games and entertainment.